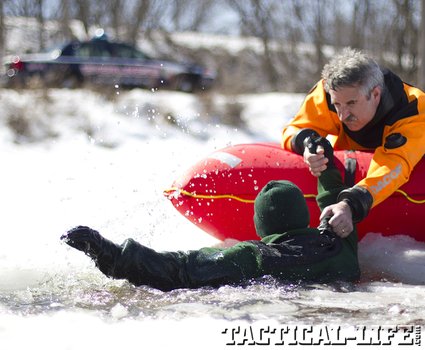 Larry “Duffy” Kopf still suffers flashbacks 45 years after falling through the ice on Wisconsin’s Sheboygan River when he was 17 years old; he frantically pulled his drenched body atop the ice, fearing he wouldn’t survive the quarter-mile walk home.

Likewise, 18 years on John Weinel of Minnesota is still haunted by the memory of spotting a drowned snowmobiler’s helmet beside a hole in an ice-covered lake behind his Twin Cities home; rescuers had been unable to cross the treacherous ice in time to save the young snowmobiler. Weinel also remembers the story a Minnesota police officer had once shared with him: a boy had fallen through thin ice and when the officer arrived on the scene he could only stand by helplessly on the shore, shouting encouragement; the boy had eventually fallen silent, laid his head on the ice, and slid into the water, dying of hypothermia before rescuers could reach him.

Anyone who has fallen through ice or witnessed such an accident never forgets it. Weinel himself was spurred by his experiences to develop the Nebulus Emergency Flotation Device, a compact inflatable raft-like apparatus that’s gaining popularity among certified first responders in the Northern U.S. and Canada. 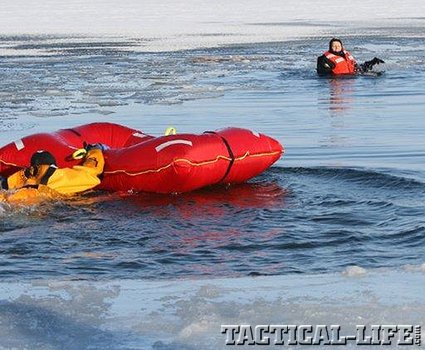 As for Kopf, he demonstrates the Nebulus to every police and sheriff’s department in Wisconsin that will have him and, more recently, to ATV and snowmobiling clubs. Even if they’re skeptical at first, most of these organizations do listen to what Kopf has to say. After all, some can share similar stories. And statistics compiled by University of Minnesota engineering students who helped Weinel develop the Nebulus show that 40 to 60 people die in the U.S. each year as a result of crashing through thin ice while riding ATVs or snowmobiles.

The Nebulus can’t save everyone, but its small size and portability give first responders a handy, multipurpose rescue tool. The most common Nebulus, released in 2006, comes packed ininside a carrying case measuring 17.5 x 11 x 5 inches and weighing 17 pounds—strapped to an ATV’s front or rear rack, it looks like an oversized seat cushion. One pull on the Nebulus’ activation handle unleashes a CO2 charge, inflating the Nebulus in 30 seconds and transforming it into a long donut-shaped flotation device. The Nebulus can support up to three adults plus a submerged ATV or snowmobile. 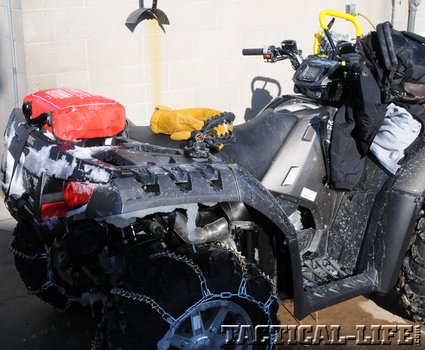 The original Nebulus is small enough to stow in the trunk of squad cars or other emergency vehicles. When rescuers arrive they can immediately inflate the Nebulus and lay their torso atop the 6 x 4-foot device, being sure to distribute their weight evenly. By crab-walking to the victim atop the Nebulus, first responders can cross ice that normally wouldn’t support a full-sized adult carrying rescue gear. Weinel says, “The toughest situations for solo first responders is reaching kids or small women who were crossing ice that can’t support bigger people.” He continues, “Ice often holds just long enough to get victims beyond rescuers’ reach. If rescuers have a Nebulus in their trunk, they don’t have to search or wait for a raft, rowboat, canoe, or airboat to get them out there.” 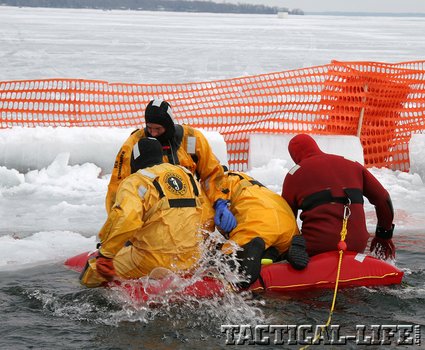 Beginning this year there will be a Nebulus that can store beneath snowmobile seats; it activates with a ripcord located between the snowmobiler’s legs. This is an excellent feature because unlike ATVs, which typically turn over and briefly float due to their large tires, snowmobiles sink as soon as they stop moving forward. A standard Nebulus can also be quickly deployed on snowmobiles if mounted near the dashboard. But the standard size is better suited for strapping to an ATV’s front or rear racks; even if ATV riders can’t activate the Nebulus before overturning in water, they can reach down and yank the activation handle before the machine sinks.

Besides supporting the rider and passenger, the Nebulus prevents the ATV or snowmobile from sinking to the bottom. And if the Nebulus deploys and covers the opening in the ice, victims beneath water can enter the flotation device through an opening in the Nebulus’ floor—scrambling into the Nebulus is easier than trying to crawl atop the ice, especially thin ice that can’t hold your weight. Weinel notes,“It makes sense for fishermen when they can strap it onto their ATV or install it under their snowmobile’s seat, and save themselves and their machine if they go through. In some ways, the Nebulus is like airbags in a car. No one goes looking for an accident to test their airbags, but airbags can save you if you crash.” 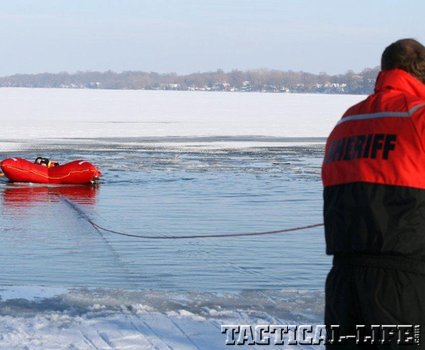 Weinel doesn’t believe that most “self-propelled” ice-anglers would buy the device as a safety precaution: “It weighs 17 pounds and fishermen are already pulling a lot of gear in their sleds.” Accordingly, Weinel and Kopf have focused their sales efforts on law enforcement agencies and departments with first responders involved in ice and water rescues. Weinel estimates that roughly 2,000 Nebulus units are being used by fire, police, and conservation officers across North America. Weinel has also sold scores of customized Nebulus Flotation Devices to the Army, Navy, and Coast Guard. 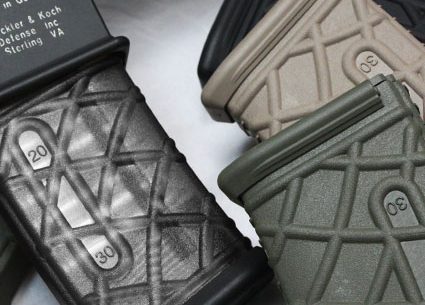