by Matt Berger
in Exclusives, Knives
0

0
SHARES
1
VIEWS
Share on FacebookShare on Twitter
Timberline Lightfoot Pistol Grip
The Timberline Lightfoot Pistol Grip™ boasts a unique handle/grip profile, making it the most ergonomic knife of the Greg Lightfoot-designed line we’ve yet sampled.  Combining an anatomically kind series of finger grooves with a down-swept angle on the back of the handles, which perfectly mates with the arc formed by the thumb, palm, and the heel of the hand, the Pistol Grip imparts a graceful grasp.  Adding to this, there’s a guard-like outcropping from the blade under the choil, and the handles curl around the small finger to surround the hand and prevent slippage.  A jimped spine provides a no-slip surface for the thumb.

The handles incorporate a 420 bolster at the blade end and Zytel® scales secured by torx screws.  Ambidextrous thumb studs have Kraton® inserts.

The beefy, 1.5mm thick 420-J2 stainless liners form a tough, strong frame, and a solid liner lock.   A stiff pocket clip with cut-outs bolts solidly into a recess in the scale on the right side with three torx screws, and features a curled lip which makes sliding it into a pocket a smoother process.

We found the Pistol Grip™ to be not only very comfortable in the hand, but also rock-solid in its grasping properties due to its configuration.  It opens smoothly with one swift thumb movement, and an impromptu test of slamming the spine of the open blade on a counter repeatedly revealed that the liner lock held fast.  Finally, the combination of the unique design, the black Zytel® scales, bead-blasted stainless bolster and blade with Kraton® inserts in its studs all made for a quite handsome knife. We just wish the pocket clip was reversible. 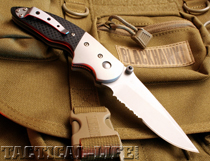 Lightfoot Zambezi Back Up™
Similar in appearance to the Pistol Grip, the Zambezi Back Up™ is a tactical folder also designed by Greg Lightfoot.  The Back Up™ is the result of numerous requests by operating professionals for a folding version to compliment the popular Zambezi fixed-blade, introduced last year.

Part of Timberline Knives designer series, the Back Up spans 8.1” total length and weighs in at 6.4 ounces.  Its drop-point blade shares the same AUS-8 stainless steel construction as the Pistol Grip, as well as the overly thick 420-J2 stainless liners and the 420 stainless bolsters.  The 3.2” blade also shares the same ambidextrous thumb studs with Kraton® inserts.

The handles resemble a pepper in shape, and feature grooves for the ring and index fingers. The scales in this case are fiberglass-reinforced polycarbonate with a fishnet pattern molded into their surface for texture.  The same pocket clip is fastened by torx screws into a recess in the scales.  The spine of the blade has four deep grooves cut into it for placement of the thumb, and a liner lock secures the blade in place.  Though our sample sported a partially serrated edge, the knife is also available with a plain edge.

We found the Zambezi to be comfortable in the hand, and easy to open, which makes sense, since it also uses the same Bushing Pivot System as the Pistol Grip.  As with the Pistol Grip, its only shortcoming is that the pocket clip cannot be reversed. Retail is $79.99. 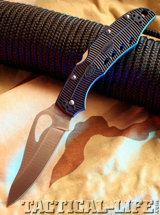 byrd Cara Cara FRN
Spyderco’s byrd Cara Cara FRN represents great value in a tactical folder.  Case in point: The acronym FRN means “Fiberglass Reinforced Nylon,” which is the plastic material from which the handles are constructed.  This plastic material is lightweight, durable, and not overly expensive.  In the case of the byrd Cara Cara, the handles are deeply and intricately textured to make for a solid grasp on the knife and include several linear tear drop-shaped cut-outs along the bottom edge for aesthetics, as well as a hole at the bottom end that serves as a lanyard loop. Full length steel liners lend also rigid strength.

The 4 27/32″ 8Cr13MoV stainless steel blade is hollow-ground with a plain edge and jimping on its spine.  A comet-shaped thumb hole allows one-handed opening, and smoothness comes from a phosphor bronze bushing.  As with the rest of the byrd line, the blade shape resembles that of a bird’s beak, and the thumb hole an eye.  A partially serrated edge version is also available.

The pocket clip is secured by three screws, and adjustable to be carried left or right-handed, tip-up or tip-down.  A David Boye Dent is cut out of the lock as a safety measure so that the handles may be gripped tightly without unintentional release of the lock.

The knife has a long, slender feel with a lengthy blade, and at just 3.8 ounces, is quite light. In fact, it’s the lightest of the three knives reviewed here.  We found it comfortable, and simple to open; the lock was solid, yet easily manipulated.  The texturing of the handles facilitated a sure grip.  Both the contours of the handles near the blade, and the up-swept curve of the jimped spine act to curb slipping onto the blade.

At a retail price of only $28.95, the byrd Cara Cara FRN represents the quality we’re accustomed to seeing from Spyderco, often at a reasonable price.