In active-shooter situations, rapidly entering the structure and engaging the threat is critical to stopping the violence. Officers with ALERRT training are fully prepared to respond.

In Aurora, Colorado, a gunman entered a movie theater and shot at an audience, killing 12 and wounding dozens. These people were just there to see a movie. It was another tragedy inflicted by a psychopath.

Since the Columbine shootings, law enforcement officers have had to plan and train for active-shooter situations. Each new incident provides a teaching opportunity, which refines law enforcement responses and tactics. In Aurora, the responding officers moved in quickly and, according to reports, handled the scene expertly. They had been trained to do so. What about other departments and officers faced with a similar tragedy? Would they be capable of an effective response?

The U.S. Secret Service’s Safe School Initiative examined 37 school shooting incidents and 41 attackers from 1989 to 1999. A school shooter is an active shooter, and the study defined school shootings as acts of targeted violence. The following findings were made:

Although the study was specific to school shootings, the above findings can describe any active shooter. For law enforcement agencies, it is almost impossible to anticipate an act of targeted violence—they cannot patrol or investigate it until it has occurred. The only real answer is for law enforcement to train and prepare to stop the deadly threat, minimize the damage and rescue the victims.

In the aftermath of the Columbine High School attacks, some local officers in San Marcos, Texas, got together and decided that active-shooter-response training needed to be standardized and available to all law enforcement. Terry Nichols, a retired San Marcos officer and now the deputy director of training for the Advanced Law Enforcement Rapid Response Training (ALERRT) Center, said, “We felt all officers should be trained and ready to respond, and that a standard curriculum needed to be developed and taught. That was the origins of ALERRT.” To address that need, in 2002 the ALERRT Center at Texas State University was created as a partnership between the Texas State University, the San Marcos Police Department and the Hays County Sheriff’s Office.

Over the last 12 years and with a little over $30 million in state and federal grant funding, the ALERRT Center has trained more than 50,000 police officers from around the nation in dynamic, force-on-force, scenario-based active-shooter training. ALERRT has become the national standard that U.S. law enforcement agencies strive for, and it’s funded by grants from the Bureau of Justice Assistance (BJA) and the Texas Governor’s Office Criminal Justice Division. The training is free to law enforcement officers and agencies. However, funding for the courses is limited. 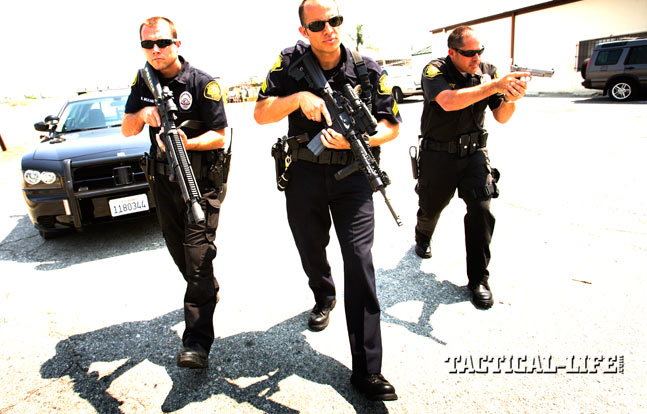 The ALERRT Center has developed and currently delivers seven grant-funded first-responder courses across the nation.

Active Shooter Level II: Day one includes self-aid and buddy-aid techniques, and day two includes force-on-force mass-casualty scenarios where the student will not only have to neutralize the gunman but also treat the wounded.

First Responder Breaching: This course covers the use of both manual and ballistic breaching tools to gain entry into a structure under extreme exigent circumstances that demand immediate entry to save and protect innocent lives.

Active Shooter Train-the-Trainer: This course, taught by four senior instructors from the ALERRT training team, will train a select group of 25 law enforcement officers who are experienced in police training. During the first two days, participants complete the 16-hour basic active-shooter course. The third day is devoted to teaching methods and instructor training. The fourth and fifth days are focused on teach-backs, remediation and evaluation of the participants.

Plainclothes Response to Violent Encounters: This course is designed to provide officers with the knowledge, physical skills and mindset for responding to violent encounters (including active-shooter situations) when armed and not in uniform. A key learning objective for this course is to address the increase of blue-on-blue shootings, where law enforcement officers in uniform shoot off-duty police officers who have intervened in a situation. Nichols explains, “The one area many agencies haven’t had training or planned for is the Mumbai-type attack—multiple shooters in different locations. ALERRT is in the process of developing a training module for just that type of incident, which will include a command-and-control element as well as tactics, medical triage and response.” 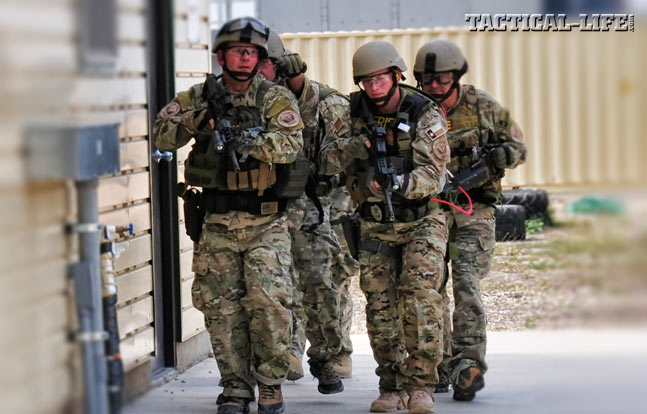 According to Terry Nichols, the Aurora incident drives home the need to train today’s first responders in medical response and triage. Most shooting rampages end quickly: At Virginia Tech University, it took the shooter just nine minutes to shoot 170 rounds and kill 30 people. The more prepared law enforcement can be for the shooting’s aftermath, Nichols says, the less lives may be lost. In a mass shooting there will be many victims with traumatic injuries, as well as a need to prioritize victims and administer advanced first aid. “We have become really good at getting cops in the door fast and stopping the violence,” Nichols emphasizes. He’s quick to credit Aurora officers for their quick thinking and handling of medical emergencies at the cinema, but he notes, “As a profession, we’re not doing as well as we should at stopping the dying.” He states that, in active-shooter situations, formally trained medical personnel are often unable to immediately reach the scene and provide casualty care. Thus, responding officers must be educated and trained in immediate casualty-care techniques to help save lives.

Nichols says, “The best lesson learned is to be prepared. While we hope that such active-shooter events will never happen in our backyards, we must be ready if they do.” He continues, “ALERRT has two honor graduates, Sergeant Kimberly Munley and Sergeant Mark Todd of the Fort Hood Police Department. They responded to the active shooter on November 5, 2009, and used their ALERRT training, which is credited for their swift and effective response on that day.”