The Albuquerque Police Department has released a body cam video showing four of its officers fatally shooting a man wielding a knife and a metal pipe inside a vacant apartment earlier this month. Watch the tense, graphic footage above. 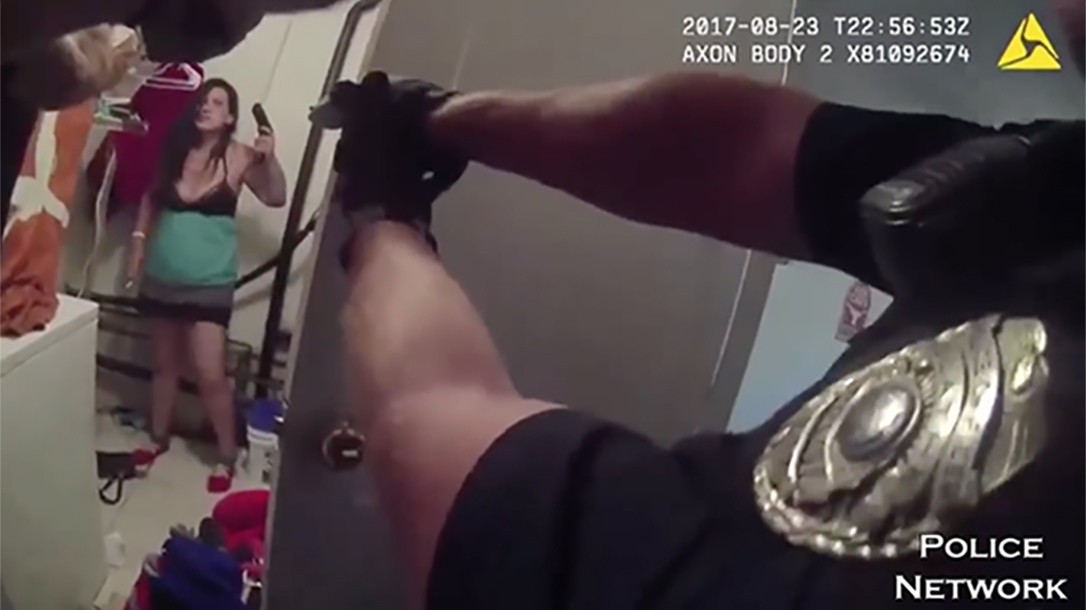 According to the Albuquerque Journal, it all began to unfold when an apartment manager called the police on the night of Jan. 7 after he saw somebody breaking into one of his vacant units. Police arrived and tried for over an hour to get the intruder to exit the apartment with his hands up. The video starts at the tail-end of that process.

When the suspect fails to comply, officers are shown kicking in the locked front door and entering the apartment. They carefully clear various rooms and closets until they come to a bedroom located in the very back of the residence.

The officers enter the bedroom, and suddenly a man bursts out of the closet in the corner, wildly swinging a metal pipe and a three-inch knife. One of the officers deploys a taser, which doesn’t seem to have any effect, and then all four officers in the room open fire, shooting the suspect a total of 17 times and fatally wounding him.

The deceased intruder was identified as 24-year-old Daniel Saavedra-Arreola. The Journal reports that his rap sheet included a conviction for conspiracy to commit second-degree murder in the shooting of a 16-year-old in 2011. Last July, he was released from prison. In October, he was charged with armed robbery. A judge denied the DA’s request to keep him in jail until the start of the trial, and he was released with an ankle monitor in late October.

In mid-December, Saavedra-Arreola evidently destroyed his ankle monitor and had a warrant out for his arrest at the time of the shooting. None of this was known to the Albuquerque police officers who entered the apartment, however.

APD spokesman Gilbert Gallegos said all four officers involved in the shooting were placed on administrative leave, and two have already returned to work.