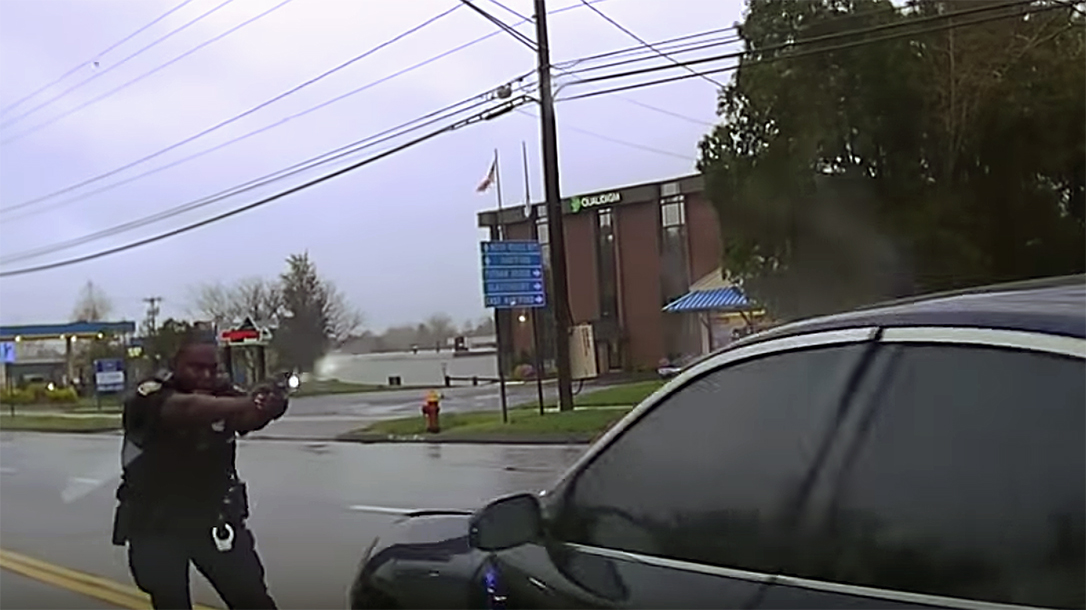 The incident began when officers Sean Staymates and Kevin Pedersen responded to a call that Eliuth Penaloza Nava was behaving erratically and possibly armed. The call came from the 50-year-old man’s family, according to a report issued by the Orange County District Attorney’s Office.

Footage shows the man begin to flee when the officers arrive. According to the report, officers spotted a gun and saw the man aim the weapon toward them. However, Nava actually pointed a CO2 air pistol at the officers.

“It was black in color and extremely similar in appearance to an authentic 9mm Luger pistol,” the report stated. “There was no orange tip on the gun, and no other markings to readily distinguish this air pistol from a real firearm.”

That’s when Pedersen and Staymates began engaging the suspect from their moving squad car, firing through the windshield, as the man fled through residential neighborhoods. Following the shooting, both officers exhibit trouble hearing other officers responding to the scene. That lack of hearing resulted in firing a tremendous volley of rounds from within the vehicle.

The officers fired a staggering 76 shots overall. The report details that Pedersen, who was driving, fired 64 rounds from his duty pistol. Meanwhile, Staymates fired 12 times with his patrol rifle. Nava took nine rounds during the shooting, according to the report. Further, the suspect tested positive for both amphetamines and methamphetamines.

The Anaheim Police Department dismissed Pedersen, a probationary officer at the time, from the department. Meanwhile, Staymates faces further department discipline, according to a report posted by cnn.com. However, neither officer faces charges stemming from the incident, as explained by the DA report:

Both Officers Pedersen and Staymates reasonably feared their lives were in danger multiple times during the pursuit
when Nava pointed the gun directly at them. Multiple witnesses also saw Nava pointing the gun out of window and at the officers. Video surveillance and BWC footage also corroborate the officers’ account of Nava’s reckless driving pattern, his failure to yield, and the officers’ reasonable belief that Nava was intending to fire a gun at them. Both officers stated that they did what they believed was necessary in order to stop the threat, and the conduct of the officers in doing so was reasonable.