Curtis Brookshire Jr., a systems engineer at Program Executive Office Soldier, shows the Army's new Multifunction Aiming Light, mounted on the rails of a Modular Handgun during the "Close Combat Lethality Tech Day" demonstration, at the Pentagon, May 24, 2018.

Last month, the U.S. Army held a “Close Combat Lethality Tech Day” demonstration at the Pentagon. One of the items on display was the new Multifunction Aiming Light, or MFAL, for the M17 and M18 pistols, and the M4 carbine. 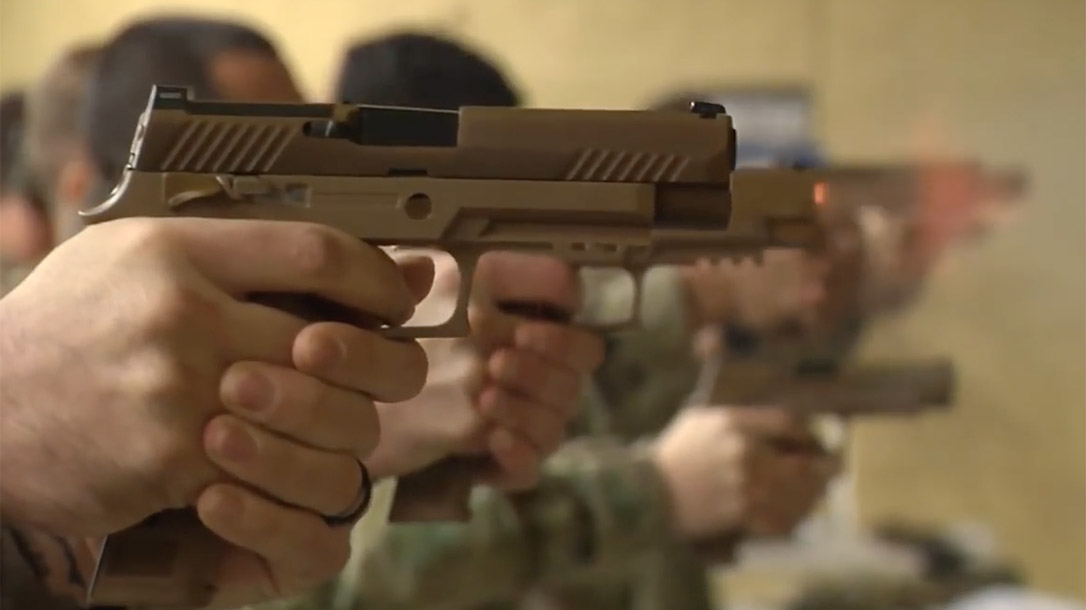 Curtis Brookshire Jr., systems engineer at PEO Soldier, says the MFAL comes with infrared and visible aiming lasers, enabling soldiers to put shots on target more easily during night and day. The maximum range for the visible and IR beams on the M17 MFAL is 25 meters. The daytime range for the M4 MFAL is up to 200 meters in sunlight. The IR beam reaches 600 meters at night.

Brookshire said PEO Soldier has been working on a number of different MFAL designs over the past several years. He asserts that these new ones stand out because they’re “smaller, lighter and more powerful.” A lighter, more compact MFAL means more accurate, and less fatigued, soldiers, Brookshire added.

In addition, the latest MFAL has the edge because its lithium batteries last longer in the field. Run times range from about six to eight hours, which Brookshire says is the duration of a standard patrol.

A closer look at the supplied photo reveals that the MFAL is based on the Streamlight TLR-8, which sports a 500 lumen white LED light and 640-660nm red laser. It also weighs 2.64 ounces and has a runtime of 1.50 hours.

The MFAL was tested earlier this year at Fort Belvoir, Va., where PEO Soldier is based. Brookshire said the feedback was “positive,” with soldiers hitting targets three to five seconds faster than without the MFAL.

According to the news release, the MFALs for the M4 carbines are a “higher priority” than the MFAL handgun variant. The service hasn’t decided on a purchase quantity, but the production run will be three to five years on an indefinite delivery, indefinite quantity contract.