by Peter Suciu
in Military, News
0

The Universal Camouflage Pattern has finally been put out to pasture. (Photo Credit: U.S. Army)

After years of trying, the pixilated Universal Camouflage Pattern (UCP) uniform has finally become impossible to see; that’s because as of Sept. 30, 2019, the U.S. Military took it out of service. First introduced in 2004, the UCP camo uniform never lived up to the promise that it would be ideal for all terrain. In fact, the only universal aspect was that it failed didn’t blend into any surroundings. 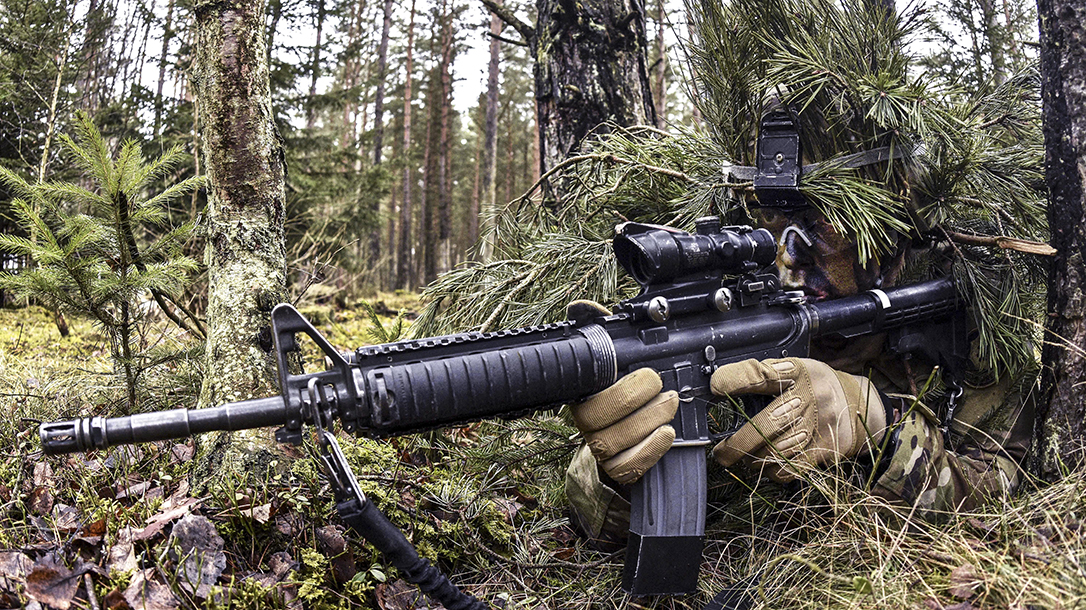 Standing Out With UCP Camo

Writer Hope Hodge Seck in her piece for Military.com summed UCP camo up best by noting, “It blended in well with grandma’s couch, but had its drawbacks in the combat zone.”

Our friend Richard Hy, a police officer and U.S. Army veteran better known as “Angry Cops,” wasn’t a fan of the UCP camo either. In the above video, he lets his opinion be know. Hy says, “This uniform is so trash, Helen Keller could see you coming from 100 meters away.”

By 2010 the U.S. Army was already looking for alternatives to UCP camo. It spent five years testing the successor: The green-and-brown Operation Camouflage Pattern (OCP) uniform. As of Oct. 1, the U.S. Army has required all soldiers possess and wear the OCP. This is just the latest transition in camouflage for the U.S. military, one that goes back more than a century.

The Original “Boys in Blue”

Throughout much of the 19th century, the U.S. military outfitted its troops with blue uniforms, a tradition dating back to the American Revolution. Back then, the Continental Army adopted a color distinct from the British Red Coats. The style and cut of the uniforms changed with the fashions of the day. Blue remained the de facto color until the late 1890s when the U.S. military followed the European powers in adopting a “summer uniform.”

One aspect of the summer uniform was lighter fabrics. For a while the U.S. Army still maintained the blue uniforms. However, after campaigns in the Philippines and Cuba during the Spanish-American War, the decision finally came that blue was hardly ideal as the range of rifles increased.

Thus, the first “camouflage” uniform might not seem like that much like camouflage. However, the “khaki” uniforms were a true step up from the dark blue worn since the founding of the nation. Ironically, the U.S. military, which sought to adopt a color distinct from the British, actually adopted a pattern of khaki that the British had begun wearing in another of its colonial wars.

The term “khaki” came from the Persian word for “dust” and it roughly meant an ash-color of the sand of central Asia. It was first used by the British-Indian Army Corps of Guides cavalry regiment in the 1840s to help make the troops less conspicuous in their skirmishes with tribesmen on the Northwest Frontier of India (now Pakistan) and Afghanistan.

After the Indian Mutiny it was adopted by British units in the subcontinent, and eventually replaced the scarlet uniforms of the British Army when it was on campaign or serving in the colonies of Africa and Asia. By the end of the 19th century the armies of most European nations were outfitted with similar khaki uniforms in their respective colonies. The First World War campaigns in Africa may have also marked the first time opposing armies worn essentially the same color uniforms – khaki!

During the First World War the use of actual camouflage was adopted as each side as way for snipers and forward observers to remain concealed, but it was a generation later during the Second World War that camouflage uniforms were widely adopted.

The German military was among the first to see the benefits of patterns that could allow soldiers to blend in with trees and other foliage. However, the United States Corps of Engineers had been working to develop a camouflage uniform even before America entered the hostilities.

In July 1942 General Douglas MacArthur called for the production of 15,000 jungle camouflage uniforms in the Pacific. Who designed the pattern? Norvell Gillespie, a horticulturist and garden editor of Better Homes and Gardens. It consisted of a spot design of greens and browns. It was notable for being reversible to a tan/brown variation that could be used in fall and early spring conditions. The pattern featured five colors in total and its spotty pattern earned it the nickname “frogskin.”

It is worth noting that the U.S. Army had also adopted the pattern, but took it out of service as it was too similar to the camouflage being used by the Germans. The obvious concern was a potential case of mistaken identity for U.S. soldiers.

During the Cold War the U.S. military once again considered developing a camouflage pattern, but it was determined that no one pattern could be suited to all the potential terrains. As a result soldiers were instead issued with a basic olive green (OG) shade 107 cotton uniforms. By the 1960s, however, the U.S. Military issued helmets with a camouflage cover. Troops used these helmets in Vietnam.

The cover utilized the “Mitchell” pattern, which consisted of overlapping dark brown, russet, beige, light brown and ochre “leaf” shapes on a tan background. This pattern was tested for uniforms. While a similar uniform pattern was tested, only the cover was adopted.

However, in Vietnam, the Long Range Reconnaissance Patrols (LRRP), as well as U.S. Navy seals did utilize “Leaf-pattern” camouflage uniforms in a limited capacity. In addition members of the Reconnaissance Team Zeta, which conducted covert cross-border operations under the auspices of the Military Assistance Command Vietnam’s Studies and Observation Group (MACV-SOG) often wore private-purchase “tiger stripe” camouflage that was never officially used by the U.S. Army.

After the Vietnam War concluded the U.S. Army Engineer Research and Development Laboratory (ERDL) again considered camouflage, and developed a general purpose pattern that consisted of mid-brown & grass green organic shapes with black “branches” on a lime green background. This pattern has been widely copied and is still in use throughout the world.

Then in the 1970s came the Battle Dress Uniform (BDU) “woodland” pattern. It was a four color, high contrast disruptive pattern with irregular markings in sand, brown, green and black. Its origin stems from concerns about a war against the Warsaw Pact in Europe. However, by 1990 the geopolitical situation changed and the Middle East became the new focus.

With it so did the need for a desert camouflage.

The U.S. Army actually developed a Desert Battle Dress Uniform camouflage in 1977. It utilized a six-color scheme that became known as the “chocolate chip” pattern due to fact that it looked a bit like cookie dough. DBDU camouflage was in use during Operation Desert Storm in 1991 and in Operation Restore Hope in Somalia in 1993, but as it was developed in the rocky desert of California it didn’t blend into the sandy desert of the Middle East and East Africa.

As a result the U.S. military developed another pattern specifically for the Middle East, and desert soil samples from Saudi Arabia and Kuwait were examined. This three-color pattern camouflage was officially known as Desert Camouflage Uniform (DCU). It may, however, have been nicknamed “coffee stain” by some U.S. personnel. The October 2001 Operation Enduring Freedom in Afghanistan and the 2003 Operation Iraqi Freedom both used DCU.

Then Came the UCP Camo

DCU was considered a major improvement over DBDU. However, the U.S. military wanted to standardize the camouflage and move away from different patterns for different regions. This led to the development of the hated UCP camo, which blended tan, gray and green (kind of). The goal here was to have a single combat uniform that could work in woodland, desert and even urban environments. The designers even omitted black as they found it was too visible to the naked eye. Instead, they incorporated different shades of gray.

Soldiers dubbed UCP camo a “digital camouflage,” as the mix of colors resembled computer pixels. Obviously the effectiveness never lived up to the promise. This has since led back to the OCP, which isn’t all that different from the patterns used during World War II.