The FBI reports that background checks to buy guns are up more than 30-percent, with a lot of people giving their loves ones the gift of heat.

KOLR/KOZL checked with a local firearms store to see if the trend is really true.

Firearms sales are always brisk this time of year at Gunsmoke Gun & Pawn.

“A lot of guys are buying themselves guns for Christmas,” says manager Brandon Reynolds. “It’s Christmas bonus season and people have a little extra disposable cash.”

And giving firearms as gifts is becoming as popular as any flat screen TV or bicycle. 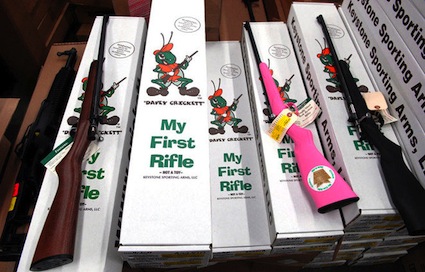 “We sell a lot of concealed carry weapons,” adds Reynolds. “We do the classes here and they’re full just about every Saturday.”

“I think you see an increase in gun sales, but as far as the CCW permits, we’ll probably catch up after people get their handguns for Christmas,” says Greene County Sheriff Jim Arnott.

Retailers say firearm sales are also on the rise because more people want to feel safe and protected — especially women.

“They’re an easy target for a criminal and criminals know that,” says Reynolds. “So hopefully that will change with all the women packing heat.”