by Will Dabbs, MD
in News
0

The the Bureau of Alcohol, Tobacco, Firearms and Explosives (ATF) clashed with the Honey Badger last week. But before we get there, a quick trip back to 2012. In 2012, Alex Bosco saw a disabled veteran struggle to manage a gun one-handed and crafted the planet’s first Pistol Stabilizing Brace (PSB). This inspired device physically connected a rifle-caliber pistol to the forearm by means of Velcro straps. Alex crafted the prototype in his garage, obtained approval from the ATF, and promptly changed the world. 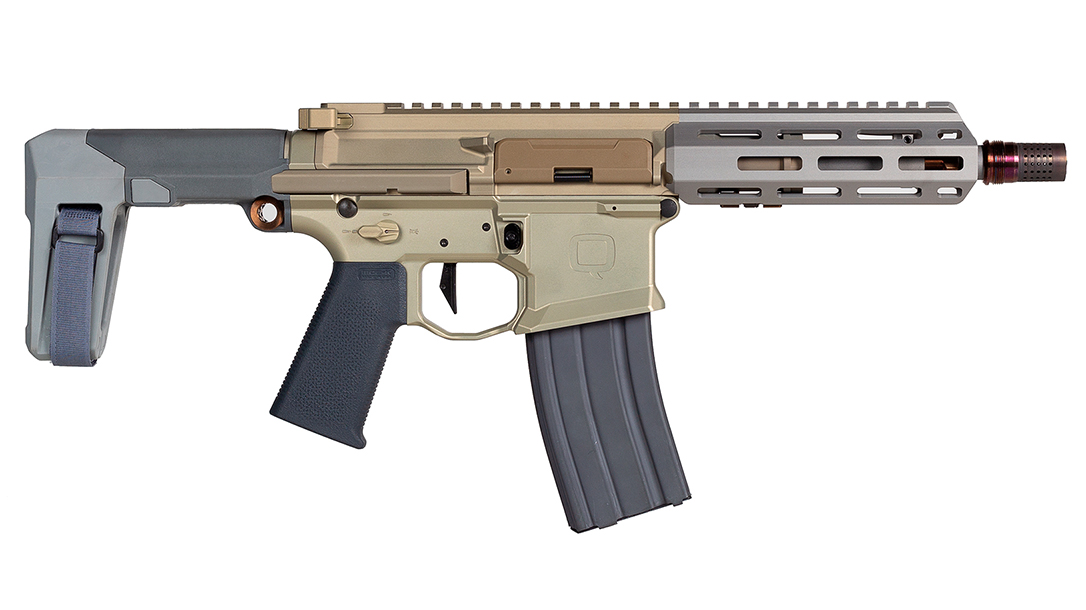 The Story of the ATF and the Honey Badger

The ATF determined that attaching a PSB to a pistol did not change the gun’s basic classification. This device subsequently opened up a brave new world for American shooters. There are around four million copies in circulation today.

The ATF was a bit bipolar about these things early on. At first it said you could legally fire the PSB-equipped gun offhand. However, put the weapon to your shoulder and it became a Short-Barreled Rifle (SBR) requiring NFA registration. That was pretty lame. A follow-on ruling backtracked. The new opinion held that how you wielded the gun didn’t actually make you a felon, and all was well with the world. Then last last week happened.

Here There Be Monsters …

Q makes cool, weird, edgy guns—there’s the Sugar Weasel, the Fix, and the Mini Fix, for instance. Q actually calls one of its cans the Jumbo Shrimp. Meanwhile, the Q Honey Badger is a high-end .300 BLK AR pistol with a 7-inch barrel. The Q guys fitted the weapon with an adjustable PSB from SB Tactical. There are scads of guns already on the market that are philosophically identical. This should have been routine.

After the Honey Badger was selling briskly, the ATF ruled that the gun was a short-barreled rifle subject to the registration requirements of the National Firearms Act; that means fingerprints, a $200 transfer tax, and a six- to nine-month wait for processing. In practical terms, that is the difference between selling lots of guns and selling basically none.

What Did the Honey Badger Do to the ATF?

So why did the ATF decapitate the Honey Badger when countless similar weapons didn’t? That’s the $64,000 question. The Honey Badger’s brace indeed adjusts for length of pull (LOP). Scuttlebutt has it that a brace with a LOP greater than 13.5 inches becomes magically irksome in the eyes of the ATF. However, the problem is that nobody really knows. There are no concrete guidelines. It would be kind of comical were it not that companies can go out of business and individual gun owners can go to jail over such stuff.

Lots of different braces adjust for length of pull. My personal favorite is the SB Tactical SBA3. It will set you back about a C-note and mounts onto a standard M4 buffer tube.

There was one prosecution of an Ohio man who put the rubber tip from a walking cane on the back of his collapsible Maxim Defense cheek rest. The ATF measured the LOP improperly and falsely claimed that this rubber bit put the gun over the secret 13.5-inch limit. The jury decided for the defendant after about an hour. Federal firearms law is admittedly labyrinthine. This recent ruling, however, seems frankly inexplicable.

Why Should You Care?

In the aftermath of the Las Vegas shootings, the ATF—with the encouragement of the Trump administration—arbitrarily reclassified bump stocks as machine guns. Prior to that time, bump stocks were sold freely through the mail. Afterwards, owners were told they had a set period to forfeit their property without compensation; failure to do so would make them felons.

Nobody really knows how many tens of thousands of bump stocks were in circulation. However, at the end of the grace period, a grand total of 680 people surrendered their bump stocks. That means lots of otherwise law-abiding American gun owners are already in violation.

PSBs are absolutely everywhere. To retroactively declare all these guns contraband would be earth-shaking. Despite the obvious financial hardship, Q has offered to pay the transfer tax for existing Honey Badger owners wishing to file a Form 1 and register their guns as SBRs.

There was chatter back in June that the ATF was indeed considering reclassifying all PSB-equipped guns as SBRs. Congressmen stepped in. As all of these rulings were established behind closed doors nobody, to include Congress apparently, really knows what’s going on.

None of this makes sense. You can walk out of a gun shop packing a pocket pistol with nothing more than a Form 4473 and a NICS check. However, it takes $200, fingerprints, and a half-year wait to buy a full-sized rifle with a 15-inch barrel. That is frankly ridiculous.

The 5th and 14th amendments to the U.S. Constitution expressly state that no persons may be deprived of life, liberty, or property without due process of law. Now the ATF has administratively determined that something previously owned legally makes you a felon; that seems the very reason those brilliant old guys included that bit in the Constitution in the first place.

In its defense, the ATF has to interpret and enforce laws that are a bucket of snakes. However, much of this current mess just doesn’t smell right. Here’s the thing: The Boston BATF regional SAC signed the Honey Badger letter, not the Firearms Technology Branch. Despite queries from individuals, companies, and gun rights organizations, the ATF has not been forthcoming.

We live in perilous times, my friends. The Nazi death camp guards thought they were doing the right thing. If allowed to stand, the persecution of the humble Honey Badger could indeed ultimately make criminals of most of us.

If Biden wins the election and we face a Democratically controlled Congress alongside President Kamala Harris, we are well and truly screwed. It’s just not hard to imagine foolishness like this leading to Waco or Ruby Ridge 2.0. Be alert and vote like your world depends upon it.