I think we all know the story of Billy the Kid, or at least some version of it. Billy the Kid is one of our country’s most notorious outlaws, creating a legend that has been told countless times. Although every version of the story is different, one thing stays the same, Pat Garrett killed Billy the Kid with the now infamous Billy the Kid gun. A gun that is now appearing in public auction for the first time ever. 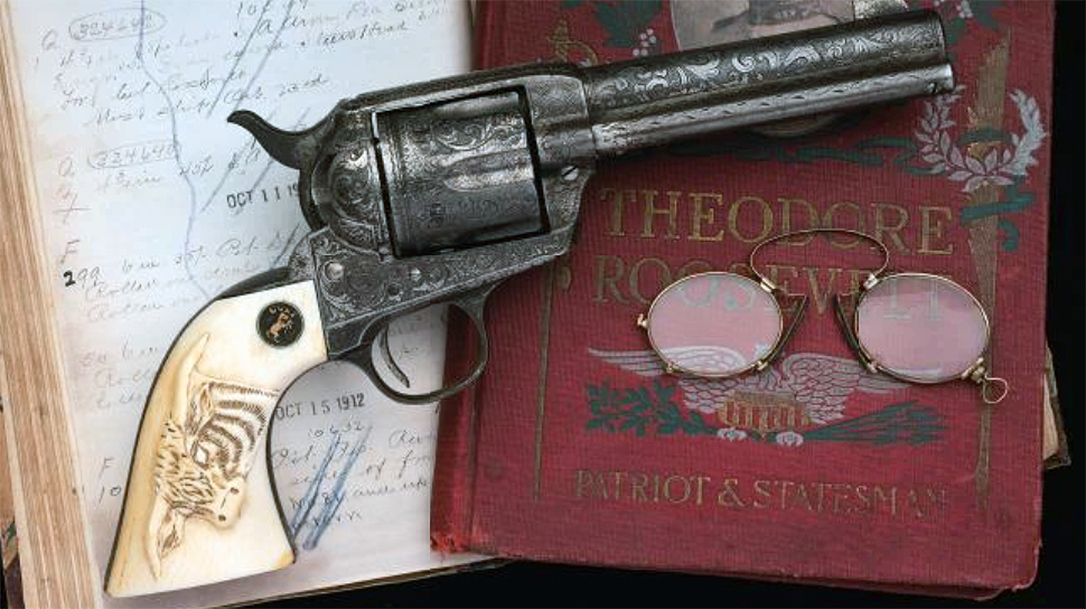 The Gun That Killed Billy the Kid

Up for auction on Bonhams—the iconic Billy the Kid gun, wielded by Pat Garrett to end the outlaw’s reign. The .44-40 caliber Colt Army revolver has a serial number of 55093 with DFC stamped over it. The 7 ½ inch barrel rides above the one line Hartford address crescent ejector rod head.

The condition is listed as very good, with traces of blue on barrel and cylinder flutes and other protected areas. Additionally, the grips are listed as “well worn.”

Regarding the provenance, from Bonhams:

“Provenance: Billy Wilson (alias of David L. Anderson); taken by Pat Garrett when he arrested Wilson and the rest of the Billy the Kid gang at Stinking Springs; used by Garrett to kill Billy the Kid at Pete Maxwell’s, July 14, 1881 (notarized copy of a 1906 letter signed from Garrett); loaned to Tom Powers for exhibition at his Coney Island Saloon (appears in Tom Powers inventory and probate); recovered by Garrett’s widow, Apolinaria (Pauline) Garrett, from Powers estate, 1933 (signed and notarized letter from Jarvis P. Garrett, April 20, 1983; contemporary newspaper documentation, including pictures of her with the gun); sold to Calvin Moerbe of Round Rock, Texas, 1976; sold to Jim and Theresa Earle, July 14, 1983.

It seems ironic that the gun that killed Billy the Kid was taken from a member of his own gang. However, that turns out to be the case. The legendary revolver was confiscated from Billy Wilson, along with a rifle, upon the gang’s apprehension on December 23, 1880. According to family reports, Garrett liked the guns so much that he continued to use them in his professional capacity.

Surprisingly, when he captured the gang, at Stinking Springs, Pat Garrett had not yet officially started his commission as Sheriff.

Although Garrett had managed to achieve what he set out to do in speedy fashion, it would not last. Following a conviction, on April 13th, 1881, in which Billy the Kid was sentenced to hang, he escaped custody. As a result, this started a months long pursuit between Pat Garret and Billy, ending on July 14, 1881 at Fort Sumner. Garrett used the Colt revolver to take the Kid’s life at the ranch of mutual friend Pete Maxwell.

Billy the Kid was a polarizing legend of our country’s past; considered both villain and hero, depending on the storyteller. Although there are many versions of the tale, the most reliable source would be the telling of Pat Garrett himself. In the last half of the book Authentic Life and Death of Billy the Kid, written by his friend Ash Upton, Pat Garrett detailed the Kid’s pursuit and capture.

Whatever the case, there is no denying that the tale of Pat Garrett and Billy the Kid have captured the minds and hearts of Americans to this day. It is a tale of two renegades set against each other—law and justice, good and evil, Sheriff and outlaw, old friends. It will always be a stark reminder of the hard code of the old west.