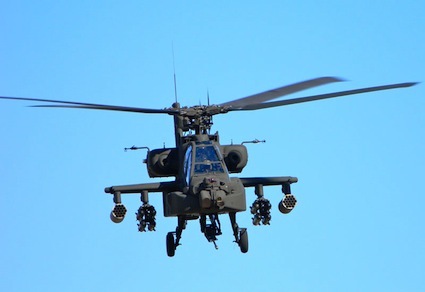 Boeing plans a November 2 rollout ceremony in Mesa, Ariz., for the first upgraded AH-64D Apache Block III destined for the U.S. Army. Ten of the latest Apaches are advancing through production, David Koopersmith, Boeing vice president of attack helicopter programs, said October 10 during a briefing at the Association of the U.S. Army annual meeting in Washington, D.C.

Boeing was awarded a $247 million contract last October to begin low-rate initial production (LRIP) of the Apache Block III. The LRIP phase covers 51 aircraft. The Army plans to acquire a total of 690 Apache Block IIIs through 2027, most of them remanufactured Block Is and IIs, but with 56 newly built aircraft to replace training and combat losses. The older Apaches are disassembled by Science Engineering Services near Redstone Arsenal in Huntsville, Ala., and then shipped to the Boeing Global Strike facility in Mesa.

The Block III upgrade features improved GE Aviation T700-GE-701D engines with enhanced digital electronic engine control units, improved drive system and transmission, composite rotor blades and extended-range fire-control radar and missiles. The upgrade introduces Level 3 and 4 control of unmanned aircraft systems (UAS), including the RQ-7 Shadow and their sensor payloads. Level 3 is control of the UAS sensor payload; Level 4 enables an Apache crewman to direct the UAS to desired locations by entering waypoints to its flight plan. The copilot-gunner seated in the front seat will perform these functions with the same handgrips used for other sensors, monitoring the UAS location and own-ship position on a tactical situation display.