The USMC has announced it is opening up a new correctional unit at Camp Hansen in Okinawa, Japan.

According to the presser, the Camp Hansen Correctional Custody Unit (CCU), which opens its doors on Feb. 14, is designed for Marines involved in cases of “minor misconduct” and will serve as an alternative to administrative separation. The goal here is to reduce early discharges among first term junior enlisted Devil Dogs. 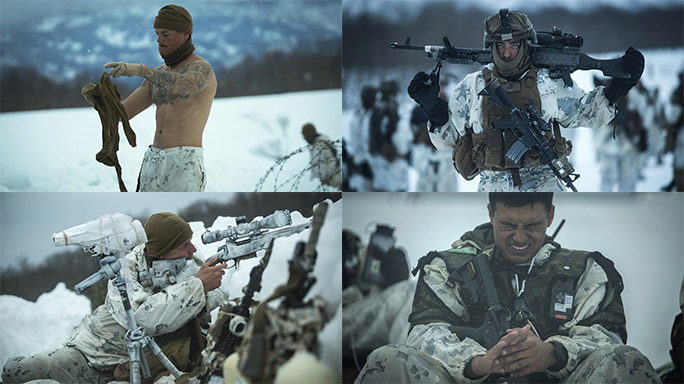 “This will provide an opportunity for good Marines to recover from a slight misstep, as well as return to the ranks free of stigma with an opportunity for redemption,” said Chief Warrant Officer Brian Sheppard the Brig Commanding Officer, Headquarters and Support Battalion, Marine Corps Installations Pacific-Marine Corps Base Camp Butler, Japan. ‘Compared to the alternatives such as administrative separation, ‘babysitting,’ restriction, extra duty, and forfeitures, CCU has the capability to really motivate a Marine and produce a far more fit, disciplined, capable, and fired-up Marine back into the ranks.”

Those assigned to the CCU will be called “awardees” and will spend anywhere between seven and 30 days under constant surveillance while completing hard labor and uniform inspections. They’ll also be undergoing “combat fitness training and values-based relapse prevention training,” the Corps said.

Judging from the photos, the training portion of the program involves hitting a pile of rocks with a sledgehammer.

“‘The rock pile’ is a form of team building and motivational strength training,” Chief Warrant Officer 5 Joseph Moschetto, the corrections section head for Headquarters Marine Corps, told Task & Purpose. “A small group of awardees swing sledgehammers to break rocks or concrete. Each swing is led, in cadence, in unison, with voice commands from the CCU instructor.

Moschetto added that Marines would wear protective gear like glasses, gloves when hitting the rock pile. In addition, the rock pile portion of the program will occur “once each Monday through Friday,” with each awardee getting 25 strikes with the sledgehammer.

The CCU’s curriculum is to “foster leadership and decision-making abilities,” the service said, with a goal toward “long term restoration.”

“Awardee supervision is ongoing 24 hours a day, seven days a week, throughout the 30 and seven day course,” said Gunnery Sgt. Loren Ortiz, the CCU staff noncommissioned officer in charge, H&S Bn., MCIPAC-MCB Camp Butler, Japan. “There will always be a senior watch stander, and his assigned watch standers on duty from reception to graduation. Weekly counselings will also be conducted and annotated in their weekly progress summary by our assigned corrections counselor. Commands are also highly encouraged to check on their Marines during command visitations.”

Ideally, when a Marine graduates from the Camp Hansen CCU, he’ll be “re-educated, refocused and re-greened.”

“I hope commanders take an honest look at this alternative because I see this program has great potential to mitigate first term discharges,” said Sheppard. “Restriction is not motivating. Extra duties are not motivating. Those Marines are negatively labeled, and for the most part see these punishments as career ending; this punishment alone is seldom corrective. Instead give the Marine an opportunity. Remove them from that state, send them to CCU, get them re-motivated and remind these men and women why they put their feet on the yellow foot prints.”