0
SHARES
3
VIEWS
Share on FacebookShare on Twitter
The coronavirus (COVID-19) outbreak recently struck one of most iconic symbols of American military might. An outbreak aboard the USS Theodore Roosevelt, a Nimitz-class nuclear powered aircraft carrier, sidelined the ship to port in Guam, the Navy announced Thursday. This has nothing to do with the U.S. Navy hospital ships sent to the West Coast and NYC. 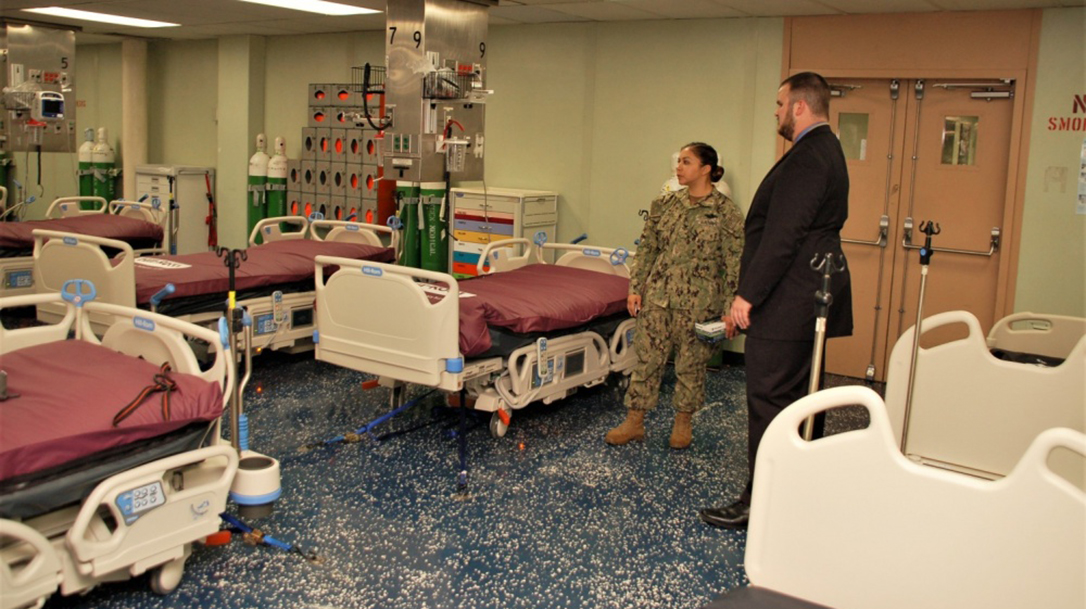 Navy personnel first discovered three sailors that tested positive, the Navy announced Tuesday. The Navy flew those three sailors off the ship for quarantine. However, the virus apparently spread before the sailors were evacuated.

“As testing continues, additional positive cases of COVID-19 have been discovered aboard USS Theodore Roosevelt,” said Chief of Naval Operations Adm. Mike Gilday in a statement. “We are taking this threat very seriously and are working quickly to identify and isolate positive cases while preventing further spread of the virus aboard the ship. No Sailors have been hospitalized or are seriously ill.”

Now the Navy faces a nightmare scenario, where sailors aboard a ship live and work in extremely close quarters nearly 100-percent of the time. This marks the most significant cost to U.S. military readiness to date, with the virus knocking an aircraft carrier, at least temporarily, out of commission.

US Ship in Quarantine

“Our medical team aboard USS Theodore Roosevelt is performing testing for the crew consistent with CDC guidelines, and we are working to increase the rate of testing as much as possible,” Gilday said. “Immediate priority will be symptomatic sailors, those in close contact with sailors who have tested positive already, and essential watch standers. We are isolating those who test positive. Testing will continue as necessary to ensure the health of the entire ship’s crew. In addition, the medical staff will continue to actively monitor the health of the crew. Deep cleaning of the ship’s spaces is also ongoing.”

The Theodore Roosevelt becomes the latest, most high-profile, example of the coronavirus’ effect on U.S. military readiness. On Thursday, Military Times reported nearly a 60-percent increase in COVID-19 cases among U.S. troops. The data suggests the military’s numbers, by percentage, far exceed the general public. That’s a problem, as U.S. troops need to maintain a constant state of vigilance and readiness. As of Thursday morning, cases jumped to 227 among service members, up from 133 on Monday, according to militarytimes.com. Now we know the majority of those cases come from Navy and Marine Corps units.

“I think we are trending higher,” said Acting Secretary of the Navy Thomas B. Moldy during a press conference. “I think some data that I saw this morning showed that we are probably a third of all the active-duty people that have tested positive are within the Navy and — and Marine Corps. I don’t have a reason for that. It would be speculation for me to try to give you a reason for why that has happened.

Every Clime and Place

“Our forces are all over the world, all the time,” Moldy continued. “That may have something to do with it, and they — we also have big fleet concentration areas such as San Diego and Norfolk and other areas, where we have a lot of people that are together. But that’s all speculation. We have not done the forensics yet on — on where — where these individual sailors contracted the disease, and until we know that, it just wouldn’t — it would be irresponsible for me to say why we think this is happening.”

The problem facing the military remains one built over 200+ years of perfecting a system. Soldiers, sailor and Marines: they live together, eat together, train together. Because they fight together. That togetherness, especially among the junior enlisted, builds a cohesion rarely equalled anywhere in the world. Units run on that bond created among brothers. Unfortunately, social distancing and shelter in place will likely prove difficult in many military settings.

“The unique part about the Navy and Marine Corps team is this is your force in readiness that has to be ready to respond to a problem around the world, and we’ve — we’ve never been given advance notice when that’ll happen, so we have to be ready all the time,” said Sergeant Major of the Marine Corps Troy E. Black.

“So the — the commanders, the guidance to them is pretty clear: Our force has to be ready to respond when we’re given the direction to do so,” Black continued. “So you need to conduct a training that’s necessary to maintain your readiness.”