by Will Dabbs MD
in Military, News
0

The U.S. Air Force recently equipped all of its combat aircraft with the new Cry Havoc GAU-5A Aircrew Self Defense Weapons (ASDWs). Compact, powerful and effective out to 300 meters, these tidy little takedown guns are small enough to ride inside a standard 40-pound ejection seat survival kit. The logic behind this inspired acquisition and the passion driving this remarkable design are comparably powerful. 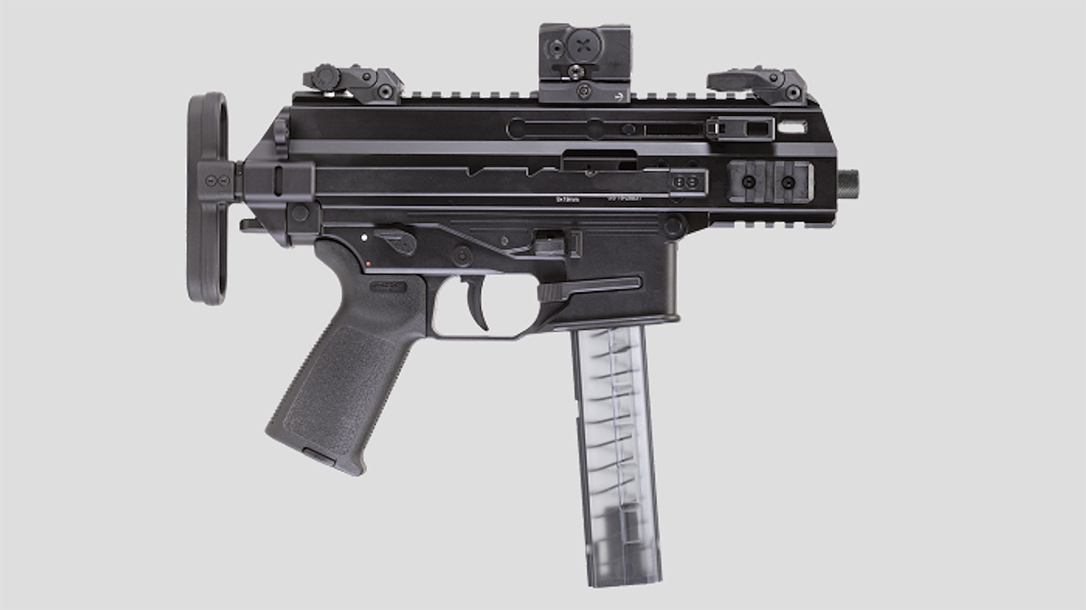 How the Cry Havoc GAU-5A Came In

On Jan. 23, 2015, ISIS terrorists placed a 26-year-old Jordanian F-16 pilot named Muath al-Kasasbeh inside a steel cage and doused him with gasoline. Al-Kasasbeh’s fighter jet had suffered a mechanical failure during an airstrike against ISIS positions in Syria the previous Christmas Eve, and he was captured after ejecting into a nearby lake. With four different cameras carefully arrayed to preserve the inhuman event in all its spectacular glory, these ISIS monsters burned the young Jordanian pilot alive.

This vile spectacle spawned outrage the world over. Jordan immediately executed a pair of ISIS terrorists held in its jails and launched a series of airstrikes that killed scores of ISIS insurgents. Among U.S. military planners, this repugnant event sparked some serious policy reevaluation.

A single F-22 Raptor costs $334 million, including developmental costs. This state-of-the-art, fifth-generation fighter plane costs $60,000 per flight hour to operate. Uncle Sam writes a check for $10.9 million to train up an operational F-22 pilot from scratch. Despite these truly astronomical sums, we were sending our men and women downrange at the controls of these remarkable machines armed with 9mm handguns that originally cost the government $237 each. That’s just crazy.

A 9mm pistol might be adequate to dissuade an agitated, illiterate farmer behind a pitchfork. However, when faced with the sorts of animals who burned First Lieutenant al-Kasasbeh to death, our combat aviators needed something spunkier. The answer was the new GAU-5A.

The Air Force began with an M4 chassis, as that offered a common manual of arms to the weapon with which all U.S. service personnel are currently familiar. The request for proposal (RFP) was intentionally vague. The barrel parameters, handguard design, takedown mechanism and sundry details were all left to the imagination. The boys and girls in blue wanted to see just what American industry could conjure. Enter Cry Havoc Tactical.

Cry Havoc Tactical’s Quick Release Barrel (QRB) takedown conversion has been around for some years now and is a tried and proven system. Consisting of a proprietary dual-throw lever system that allows the barrel and handguard to be quickly and easily dismounted from the upper receiver, the QRB was called out early on as the nucleus of any future contract. The QRB system was simply more reliable, more repeatable and more effective than competing designs.

Testing included torturing 20 separate barrels and also assessing their accuracy out to 300 meters. Once the details of the system were hashed out, the project evolved from an RFP to a request for quotation (RFQ). Cry Havoc Tactical quoted the project and then sat back to see if anything came of it. In the world of military contracting, this nebulous ether is the space where many great ideas simply wither away and dies. But in January of 2018, my buddy Ralph Seifert at Cry Havoc got the call. The company was now officially a defense contractor.

Over the next several months, Ralph and his crew delivered more than 2,000 conversion kits to the Air Force. The kits consisted of their QRB upper receiver along with Magpul flip-up iron sights and an FAB Defense pivoting pistol grip. The Air Force already had plenty of select-fire M4A1 lower assemblies. Because the modular M4 system is just plug and play, it was a simple matter to slap the guns together and go.

The resulting GAU-5A is indeed small enough to stuff into an ejection seat survival kit alongside four 30-round magazines. This gives a downed aviator 120 rounds of full-sized 5.56mm NATO ammunition to help keep the barbarian hordes at bay until the cavalry arrives. The Air Force plans to put these guns into every combat aircraft that flies.

The bottom half is classic select-fire M4A1 with a standard collapsible GI stock. The rear sling swivel has been removed on the issued guns to save a little space, however. The upper half features a free-floating, 12.5-inch barrel along with a low-profile gas block that feeds the direct-impingement operating system. The 10.5-inch Midwest Industries handguard includes plenty of M-LOK slots and four standard sling sockets.

The folding pistol grip is an AGF-43S from FAB Defense. This grip is installed using a standard grip screw and features ergonomic finger grooves and a pebbled contour. By pressing a button, the operator can also pivot the grip backward to minimize the height of the weapon.

As I mentioned, Magpul flip-up sights are also included. With the sights folded, the package remains sleek and small. However, these rugged sights snap into position instantly and keep the weapon running straight and true. Air Force planners felt that electro-optical sights might not survive the rigors of ejection.

The QRB system is simply inspired. This device consists of a collar that mounts to the threaded front aspect of the upper receiver as well as a matching collar for the near end of the barrel. The barrel extension slides into place easily, and a pair of throw levers hold everything tight. A proprietary interface maintains a nice tight gas seal for the gas tube. Mounting and dismounting the barrel takes less time to do than to describe.

In a phrase, massively better than any conventional handgun. The GAU-5A is a bit smaller and lighter than a standard M4. However, getting the gun into action requires maybe 30 seconds from a standing start. And the ergonomics and generous sight radius conspire to keep you dangerous out to a football field or three.

I cut my teeth on the M16A1 with iron sights back when I wore the uniform. Since anybody running one of these weapons will have perfect eyesight and nerves of steel, it really does become a force multiplier when the chips are down. The GAU-5A runs at least as well as did the old M16A1 rifles with which I used to live.

On semi-auto and taking my time, I could keep my rounds on a man-sized silhouette out past 100 meters. The limiting factor at this point in my life is always my tired eyes, not the hardware. Firing on full-auto and keeping my bursts brief, I could easily keep my rounds on target out to 25 meters. Considering its modest weight and stubby dimensions, the gun was actually shockingly controllable in this mode. If the mission were to break contact or provide cover for an incoming Combat Search and Rescue (CSAR) bird, the GAU-5A would reliably do the deed.

Back when I flew for Uncle Sam, my machines cost $26 million apiece. That’s pocket change today. Despite all the technology, armor and firepower within which we were always cocooned, should you go down over hostile territory, that sidearm becomes the most important thing in your universe. In my day, all we had were standard-issue 9mm M9 pistols.

The published maximum effective range for the M9 pistol is 50 meters. However, I have a fellow aviator pal who actually had to use his in Mogadishu, Somalia. When your palms are slick with sweat, your heart is beating out of your chest and life has gone utterly sideways, that number gets closer to 10. With the new GAU-5A, however, a downed aviator really stands a much better chance of keeping the bad guys at arm’s reach long enough for help to arrive.

The point is not to use the GAU-5A to fight your way into Pyongyang and give Kim Jong-un a wedgie. If a U.S. aviator is lost over enemy territory, the U.S. military is going to move heaven and earth to get that person back. Various tactical helicopters, V-22 Ospreys, close-support jets, armed drones, special ops forces and, if necessary, strategic bombing assets would all be mobilized to smite the bad guys and get that downed aviator back home.

However, it takes a critical few minutes before Uncle Sam can crack open his Statue-of-Liberty-sized can of pure, unfiltered shock and awe. Until then, that hapless aviator is going to be out on the pointy end alone. Under those circumstances, a locked and loaded GAU-5A with three spare magazines would be awfully comforting.

Ralph Seifert and the crew at Cry Havoc are genuinely cool folks. They produce a superb product that is good enough to ride underneath the seat in a machine that costs more than my hometown. Now that they’ve satisfied the Air Force contracts, they have time to build these things for the rest of us.

The stubby barrel will demand either a registered short-barreled rifle (SBR) lower receiver or a standard AR lower receiver outfitted with a pistol stabilizing brace. Either way, this is the cheapest way you will ever get into a genuine current GI-issue combat weapon. The Cry Havoc GAU-5A looks cool, stows almost anywhere and runs like a chipmunk on speed. In a world of $600 toilet seats and politicians on the payroll, this nifty little gun also represents a fantastic value. For even more info, visit cryhavoctac.com.