Jason and I each sat alone in the bleachers during seventh-grade gym class, a pair of skinny, forlorn children new to the school and caught hopelessly within the pitiless throes of puberty. We were the chemical formula for awkward. Of roughly the same size and build, we were frequently mistaken for brothers in subsequent years. A chance comment overheard that day sparked a conversation that orbited around Sherman tanks. For we were hopeless nerds who built plastic models and still played army when American society condoned such.

To turn a biblical metaphor, ours is a David and Jonathan friendship. We helped raise each other’s children and in the subsequent decades embarked on countless projects together, legal and otherwise. For example, our largest trebuchet sported a 12-foot throwing arm. It’s a miracle we survived.

When Jason’s dad grew grievously ill, we logged two days in the workshop building the great man’s casket. My friend stretched out on the floor of the shop so we could get the dimensions right. We laughed, cried and basked in the bonds of Christian brotherhood more deeply than might be imagined.

When I got an email inquiring whether I might be willing to trek to western Texas to drive and shoot a real Sherman tank, my next phone call was naturally to my best friend.

There’s actually a place in America where normal guys can drive and shoot real tanks. Naturally, it’s in Texas, oriented within the legendary Ox Ranch, about two hours west of San Antonio. Our first impressions of DriveTanks.com were thoroughly surreal.

We pulled off the rural county road expecting armored vehicles and gunnery ranges only to be greeted by a meandering herd of giraffes. Delving deeper into the bowels of the place, we passed buffalo, wildebeests, zebras, ostriches, kangaroos and some prehistoric-looking bovines called watusi. These simply gigantic pseudo-cows sport horns the size of a Winnebago.

The Ox Ranch is 18,000 acres of pure, unfiltered paradise. A working game preserve and exotic hunting facility, the Ox Ranch hosts well-heeled hunters from throughout the world. DriveTanks.com shares the space and partakes of the same superlative amenities. The food grows on the ranch. The ranch’s world-class cooking staff prepares the meals and everything sports the highest levels of refinement and creature comforts. Imagine the Ritz-Carlton displaced to the African savanna along with a sprinkling of vintage armored vehicles. Now you have a decent mental image of the place.

After checking in at the palatial hunting lodge and signing the obligatory legal paperwork, we reported to the nearby tank barn. Screw Disneyworld, brothers. DriveTanks.com is where dreams really come true. 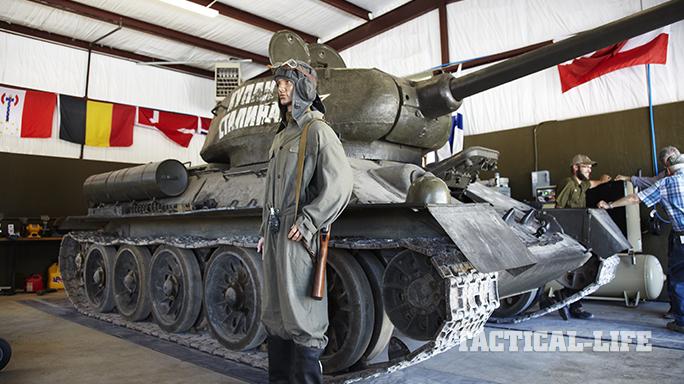 The tanks are massive, imposing beasts crammed side by side into several contiguous maintenance buildings, but an M4A2E8 Sherman tank identical to the one used in the Brad Pitt movie “Fury” greets you upon arrival. Unlike Pitt’s tank, this one has fully functional weapons. In fact, all of the guns large and small are live.

A vintage camouflaged Waffen SS Sd.Kfz. 251 armored halftrack sits alongside the Sherman. Beyond the tracked Kettenkrad, the 25mm Pateau cannon and the only operational German Pak 40 75mm anti-tank gun in the country is the World War II-veteran Russian T34. The actual uniform and equipment worn by the Gordo character in Fury adorn a mannequin in the corner, and a uniformed reproduction of German Tiger ace Michael Wittmann keeps an eye on things. An impressive array of belt-fed machine guns splays out in a semicircle from one wall, and an extensive collection of vintage and modern long guns and submachine guns is stacked along another. The rest of the walls are festooned with military artifacts recovered from battlefields across the globe. A fully stocked bar liberally decorated with period military ordnance and memorabilia overlooks the place.

The facility could pass for a well-equipped military museum. There is one notable exception: There are no ropes keeping you off of the stuff. Like sugar- fueled toddlers, Jason and I crawled up, around and through everything in the expansive collection, chattering feverishly with each new discovery. The unabridged English lexicon lacks the superlatives to adequately describe the awesomeness of this place.

The notion that percolates within the thinking man’s viscera when settling into these war machines, each the alpha predator of its respective age, is that this would be a simply horrible place to die. For all the machines’ power and ferocious, palpable capacity for chaos, the men locked within these 40-ton engines of combat were essentially entombed. In the hands of the greatest generation, this 1944-era Sherman. for example, wrested the world from the diabolical clutches of the Nazis with their formidable Panthers and Tigers.

It falls to me to attempt—vainly, no doubt—to paint a word picture of what DriveTanks.com’s extensive facility was like. Hate me if you must, but I got paid to do this. Never let it be said that I’m unwilling to suffer for my art.

The experience was nothing like what I expected. Shermans weigh 80,000 pounds, so the immutable dicta of physics are most overtly at play behind the mass of these vintage machines. Even at 73 years old, the thing feels indestructible. The tank’s original twin Detroit diesels leap to life sequentially with the push of a button. I had to stand on the clutch to hold it in place, and the gearshift is floppy, like that of a 1930s-era roadster. Trading the clutch for gas is not unlike any manual transmission on a modern automobile, but the mass of the beast means you have to shift quickly lest the tank slow down unduly.

The Sherman steers via differential braking, so with the steering levers in the default position (fully forward), it goes where it is pointed. To turn, you torque back on the appropriate lever to slow the track on that side of the turn. Any serious maneuver requires both hands and some considerable effort, and the tank has a surprisingly wide turning radius.

The tank course would do Disney proud. You bypass a blown-out bridge before pitching into a steep riverbed and clanking up a shallow river. Simulated artillery fire spices up the ride. This particular course then takes you up a rise in the face of machine gun fire from a concrete pillbox before reaching the live-fire range.

The high-velocity 76mm gun throws a 14-pound steel projectile at about 2,500 feet per second. That’s like shooting a 98,000-grain bullet with the same velocity as an AK-47. You fire the gun via a lanyard from outside the turret so you can fully enjoy the downrange effects. The muzzle blast is adequate to clear your sinuses and, if care is not exercised, remove your glasses. Our shot destroyed an unfortunate Toyota before irrevocably burying itself within the ample backstop. Jason and I laughed until our faces hurt. 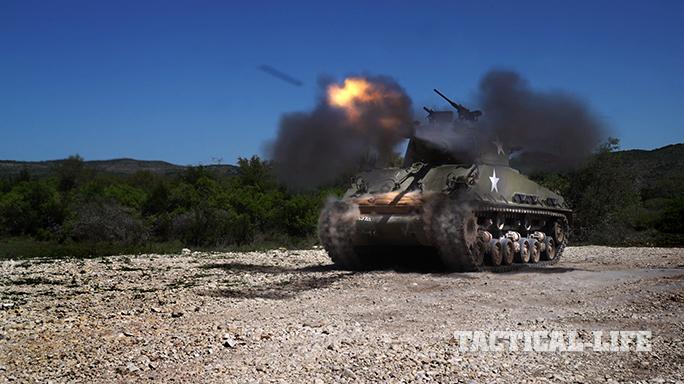 You can glimpse the tools of war in many antiseptic museums. By contrast, a trip to DriveTanks.com puts you in the same seat doing the same things those awesome old guys did when they spanked the Nazis and subsequently saved the world. DriveTanks.com is the only place where you can drive vintage armored vehicles while also exercising their massive weapons systems. The sounds, vibrations and smells of these classic war machines inevitably strikes a visceral chord.

The experience isn’t cheap, but it’s an incredible value. You would spend more at an Orlando theme park and leave with half the memories. The day before we arrived, a 12-year-old child took the 84,000-pound Leopard around the course. Since the guns fire from fixed mounts, even children can run them safely. Imagine how that young man answered the question, “So what did you do over spring break, Timmy?”

I have traveled the world, parachuted out of airplanes in pitch darkness, flown combat helicopters, delivered 60 babies and saved more than a few lives. But I had never done anything like this. The experience at DriveTanks.com did not just entertain my best friend and me—it genuinely expanded our horizons and enriched an already incalculably rich friendship. Save your pennies, schedule some time off work and go let these guys show you around their tanks. This is something every real man should do at least once.

This article was originally published in “Ballistic” Fall 2017. To order a copy, visit outdoorgroupstore.com.