FBI’s Year of the Gangster

An elderly janitor walked into the cell block of the Lake County Jail at Crown Point, Indiana. The date: March 3, 1934. It was a relatively new facility, built onto the back of the sheriff’s house in 1926, easy to clean, impossible to escape from. The addition of a notorious prisoner—John Dillinger—would prove that. Or so the sheriff thought.

As the janitor entered the cell, the prisoner jumped him and jammed a gun—actually a piece of wood carved in the shape of one—into his ribs. Quickly, through a combination of bravado and desperation, Dillinger tricked half a dozen guards back to the cell block, confiscated their weapons, and jailed the jailors. 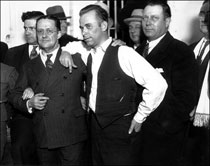 On that day, Dillinger was 30 years old. He was of medium build and average height, with brown, thinning hair. His most distinguishing feature was a roguish smile, which he had put to good use in a series of press photos with the prosecuting attorney Robert Estill and the sheriff upon his extradition to Crown Point. The chummy nature of the photos contributed to both these officials losing their jobs that year. And Dillinger’s charm had already begun to captivate the American people, who began to see him as part Robin Hood, part vicious thug.
The notorious gangster had been captured in Arizona two months earlier. He was wanted in connection with the murder of an East Chicago, Indiana police officer named William O’Malley. At the time Dillinger was not on our radar; he had committed no federal crimes. But we had been assisting Ohio law enforcement in their search for him after was freed from a Lima jail by his confederates in the fall of 1933.

Now Dillinger had escaped once more. In making the break, he’d stolen the sheriff’s car and driven it to Chicago, 50 or so miles northwest of Crown Point. In the process, he crossed the Indiana/Illinois border and violated the National Motor Vehicle Theft Act, commonly called the “Dyer Act.” John Dillinger was now a federal fugitive and an FBI subject.

The Bureau’s success in dealing with the gangsters led to significant changes in the FBI and law enforcement nationwide. Over the next few months, we will spotlight what we are calling “The Year of the Gangster” on this website through stories, photographs, and multimedia presentations, along with some new case details. We will tell how we went after such desperados as Bonnie and Clyde, “Pretty Boy” Floyd, “Baby Face” Nelson, and more. We will examine the social and political changes that arose from these criminal threats, bring to light long-forgotten historical sources, and consider the role that the Gangster Era played in the evolution of the FBI and its portrayal in American popular culture.