VIDEO: Jerry Miculek Blows Out 65 Birthday Candles With a .50 BMG

One of our favorite pro shooters, Jerry Miculek, is at it again. To celebrate his 65th birthday recently, the longtime Smith & Wesson pro blew out 65 candles in the most Jerry of ways. He did with one shot from a Barrett M107A1 chambered in the most ‘Merica of cartridges, the .50 BMG. 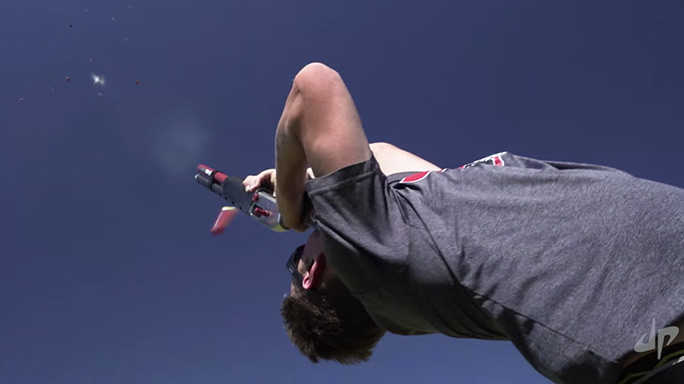 Now why did Jerry use a .50 BMG to shoot out birthday candles, you might ask. Why wouldn’t he? We’re talking about arguably the most prolific, accomplished professional shooter in history. It’s only fitting that our man rings in another year with the biggest of bangs.

When hitting the range down on Shootout Lane in Jerry’s home state of Louisiana, he often has the best of toys at his disposal. A revolver, pistol and 3-gun champion, the man can clearly do it all. But in this video, Jerry breaks out a Barrett M107A1. This 20-inch barreled version, in Flat Dark Earth, provides the perfect vehicle to deliver Jerry’s candle-obliterating payload.

To make the shot even cooler, Miculek explains the team used a pack of rimfire-grade Tannerite packed into the cake. And the detonation completely erased the birthday cake, candles and everything else on the table. In fact, the energy broke the table from its concrete base in the ground, a testament to just how powerful the forces are. So unless you’re Jerry Miculek or other professional, maybe don’t try this at home.

Besides, few can lay it down quite like Miculek. And he knows how to America with the best of them. So Bravo Zulu Jerry, great shot. And happy birthday to the living legend. Finally, check out this surprise birthday video Team Jerry put together. It’ll get you right in the feels.

For more on Jerry, check out his YouTube page, Jerry Miculek – Pro Shooter.