King Abdullah II of Jordan is a legit gun guy, which makes sense, given that the 56-year-old “Warrior King” previously served in the British Army; Royal Jordanian Army, where he was an armored tank commander; and Royal Jordanian Air Force, where he became a certified Cobra attack helicopter pilot. He also commanded Jordan’s Special Forces before ascending to the throne. 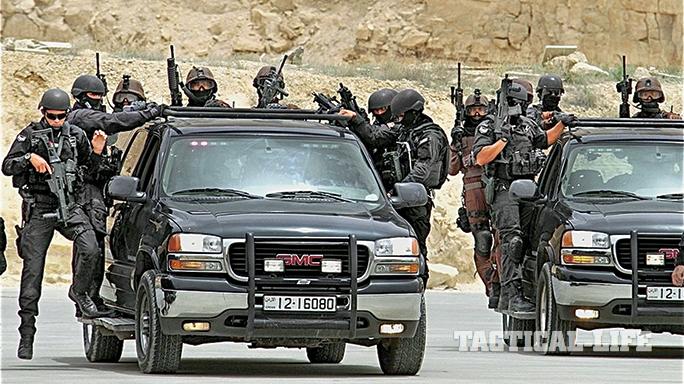 Abdullah’s son, Hussein, Crown Prince of Jordan and heir to the throne, is a second lieutenant in the Jordanian Armed Forces. He is evidently also a gun guy. The duo recently spent some time doing some live-fire training at the King Abdullah II Special Operations Training Center in celebration of the Prince’s 24th birthday. The event was captured on video. Check it out above.

Queen Rania Al Abdullah originally put up the footage on her Facebook page, with a caption that reads:

“Happy birthday Al Hussein, we grow more proud of you every day… I see so much of His Majesty in you, including your shared love for the military – Taken during the conclusion of a recent round of live-fire training exercises.”

As The Drive notes, the video shows Abdullah and his son getting out of a Crown Vic and going through the live-fire course together. The King can be seen rocking the Sig Sauer MCX, in addition to a JTK 1911 built by Jordanian Armament and Weapon Systems, or JAWS. According to The Firearm Blog, Hussein uses an M4 carbine and a Glock 19 as his loadout.

Below, check out a few other videos of King Abdullah II and his son getting some training in.