by Denis Prisbey
in News
0

Something of a multinational effort, the KRISS owes its roots to a French engineer named Renaud Kerbrat, who now lives in Switzerland and works for TDI’s parent company, Gamma Research and Technology. To condense a longer story, a prototype was brought to the attention of Gamma’s chairman, and subsequently KRISS-TDI was founded here in the US in 2004 to refine the prototype. Further development resulted in the three .45 ACP models that TDI sells currently: the semi-auto CRB/SO with a 16-inch barrel, the SBR/SO with a 5.5-inch barrel, and the full-auto Sub-Machine Gun with a 5.5-inch barrel. All use the same core principle and basic construction, although with different end users in mind.

For military and police sales, the carbine in either semi-auto or sub-gun configuration had a list of necessary design features that included light weight, relatively compact dimensions, premium materials, simple breakdown for main-tenance, extended magazine capacity, and a high level of accuracy. But, those were just the basics. The main idea was to address the same issue that’s been the bane of semi-auto shooters and sub-gunners for generations…recoil.

Traditional semi and full-auto designs of the past have all operated with some form of a reciprocating bolt. Whether activated by gas or recoil, those designs all used a mass of steel that traveled straight back and forth to eject empty brass and chamber a new round. This linear travel acts in conjunction with other forces to create recoil and associated muzzle rise. While Newton’s Third Law Of Motion (For Every Action There Is An Equal Reaction) can’t be avoided entirely, and a forward push against a bullet traveling out the bore still results in a rearward push against the gun and shoulder. The unique mechanism of the KRISS Super V System re-directs some of the recoil forces inherent when a bolt strikes its rearward travel stopping point. Using only two major moving parts, the KRISS still depends on a bolt, but that bolt is smaller (less than 20% of the weight of a 1911 slide) and only travels the distance of the length of a .45 ACP cartridge. The reduced bolt mass and travel combine with the KRISS’ proprietary “slider,” which absorbs recoil energy and directs it downward internally inside the lower frame housing instead of rearward, to reduce felt recoil by as much as 50%, and muzzle climb as much as 95%. In a .45 ACP, that’s impressive, and more so in a full-auto sub-gun. In very plain terms, the KRISS carbine shoots easy, and stays on target. 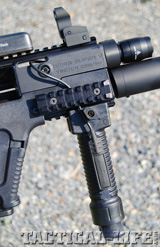 Gun Details
The standard 16-inch CRB/SO model is a very spacey-looking gun. Although it uses a very unique application of the principle, inside it’s still a delayed blowback and fires from a closed bolt. The 16-inch barrel is fabricated from 4140PH Cr-Mo steel and button rifled with a 1-in-16-inch right hand twist. The basic package comes with a full-length non-ventilated lightweight aluminum barrel shroud. The hammer, semi-disconnect, bolt lock lever, bolt lock mounting lock, extractor, and ejector are all MIM (metal injection molded), the bolt is an investment casting. Upper and lower frame sections are polymer.

A stock CRB/SO features locking flip-up sights on its 13-inch Picatinny rail. These are lightweight alloy sights with a protected front post that’s adjustable for elevation and a dual aperture rear (short and long distance) adjustable for windage. The ambidextrous safety switch is located within easy reach for most thumbs; it can be activated with the bolt open or closed and cocked or uncocked, and the bolt can be cycled with the safety on. The ejection port is on the right side, and the bolt release and cocking handle are both on the left. One 13-round Glock 21 .45 ACP magazine ships with each semi-auto KRISS, along with top and bottom rails, a sealed grip storage module for two AA batteries, a light receptacle cover, tool kit, mini-cleaning kit, and a lockable carry case. There are also hard-points for optional side rails.

The carbine’s interesting polymer folding stock locks open securely, hinges to the right, and snaps onto a latch molded into the side of the lower frame just below the ejection port when closed. It’s also adjustable at the rear for length of pull, and quickly detachable entirely by pulling one retaining pin at the hinge. The stock clears the ejection port when folded, and the carbine can be fired with it closed. 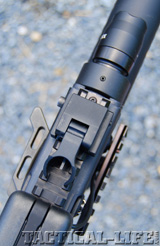 Shooting Impressions
Although it jars the sensitive eyeballs of traditionalists like me, the KRISS is a very clear case of form following function, and function is what matters. Testing on a mildly breezy day with eight different .45 ACP loads in 185 and 230-grain bullet weights at 50 yards off a rest, and then some informal off-hand shooting afterward showed some very positive attributes of the package.

The EOTech was already sighted in close enough to start firing for groups immediately after the first two sighting shots, and from there it was an extremely smooth session. The manual for the KRISS lists several specific ammunition brands and bullet weights as being “compatible,” two of which were sampled in the gravel pit. They and five of the other six cycled perfectly, the only malfunction being the refusal of the 230-grain Federal Tactical JHP to chamber fully on the first round out of the magazine. Once the first round was manually chambered through the open ejection port, the rest of the same loads fed reliably. When I later asked TDI about the apparent ammunition issue the answer wasn’t that the gun was finicky, but that it was designed around SAAMI pressure levels for the caliber and the factory loads listed as “certified” were those tested thoroughly and approved for function by the company. There’s no reason not to try others, and no reason to expect everything to work in any particular gun. Do your own testing and go with what runs for you.

Incidentally, if you fire the KRISS, you’ll notice quite a bit of black carbon on the empty brass when you pick it up, a sign of blowby in the chamber. The manual recommends a quick wipe and swipe through the bolt and slider raceways after 400 rounds or so with a complete teardown and cleaning every 1000 rounds. This is more of a technical advisory than a major concern. TDI says the high cyclic rate (a legacy of its sub-gun roots) may con-tribute to the blowby, and the need for cleaning at regular intervals depends on the ammunition used. I did see that the Winchester 185-grain BEB WINClean brass showed no carbon deposits inside or out, as usual. 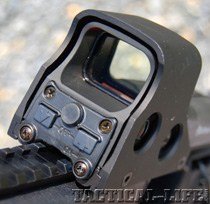 Fifty yards was the maximum distance I chose for accuracy trials; the carbine itself is quite capable of reaching out and touching at 100 yards and beyond, but I think it’s more suitable for a close combat or defensive role. Off a rest, the EOTech’s ability to dial brightness up or down to meet changing lighting conditions made it very easy to put a bright dot on the black bulls that didn’t overpower or obscure the targets at all. The EOTech’s “window” size offers a substantial view of targets and immediate surroundings, it’s quick on target and precise enough at 50 yards to handle business with confidence. A note in passing on the sights, if you buy the Basic Kit with intentions of upgrading later, TDI recommends staying with the components they carry. The backup sights are designed for the KRISS and the manual warns that they will not work on other guns, and other irons won’t work here. Same deal with the EOTech 512, it’s the only red-dot holographic sight that’ll co-witness with the custom backups.

Since you were wondering, this is as good a spot as any to answer your question about why TDI built the KRISS around the Glock magazine. The com-pany says that after testing around 40 types of .45 ACP magazines, they discovered two things: building a reliable magazine is “really, really hard,” and “…Glocks were hands-down the most reliable and ubiquitous models out there.” No sense in reinventing a wheel that’s already widely available and already works. I used both the 13-rounder that comes standard and the modified 30-rounder during the test session, and aside from the one Federal round, both worked fine. The shorter magazine loads easily, but I could only manage 29 rounds in the taller one without a beefier thumb or a loading tool. TDI sells the 30s in three forms: As a kit with two snap-together sleeves and a new spring to convert your own Glock 21 magazines, a fully assembled (magazine plus extension kit) unit, and an assembled unit with UpLula Speedloader tool.

TDI isn’t kidding about the carbine’s stated controllability. When the muzzle stays low, it means less distance and time to take up in recovery between shots. Even in semi-only, allowing for a quicker rate of accurate aimed fire than the nearest competitor provides. The KRISS holds steady off-hand or off a rest, and I had no problems in staying tight in the black on a B27 silhouette. The shroud protects from an off-hand burn on a hot barrel, but it does heat up with repeated firing. I’d recommend going with one of the two different ventilated shrouds that TDI sells for the 16-inch barrel; either one should reduce heat buildup in barrel and shroud. They can also set you up with suppressors for the SBR variant if you go that route, and other accessories such as parts kits and cleaning gear.

Final Notes
The KRISS is not cheap with the Basic Kit retailing at $1745 and the full TacPac at $2829. The SureFire light, sling, EOTech, and GripPod foregrip integrate well into the overall package and boost its capabilities substantially. If the TacPac busts your budget, you can either upgrade the Basic Kit with single components from TDI as funding permits or buy the extra four-item TacPac stand-alone option as a bundle for $946.50.

Find out nmore from Transformational Defense Industries at kriss-tdi.com or call 757-821-1089.