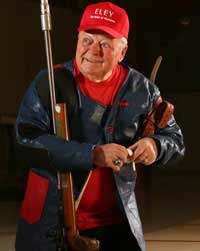 FORT BENNING, Ga. – A former U.S. Army Marksmanship Unit shooter is as a finalist for the 2008 U.S. Olympic Hall of Fame. He is the first Olympic shooter ever selected as a finalist.

Retired Army Lt. Col. Lones W. Wigger Jr. was selected to four U.S. Olympic Teams and won three Olympic Medals. During his shooting career, Wigger won 111 medals (65 Gold, 38 Silver and eight Bronze) and set 29 world records in international competition – more than any other shooter in the world. He is a member of the USA Shooting Hall of Fame, the U.S. Army Marksmanship Unit Hall of Fame and was also honored in 1996 by the USOC as a “Golden Olympian.”

Wigger, 70, of USA Shooting of Colorado Springs, Colo., is among the 18 individual Olympian Hall of Fame finalists announced by the USOC. He is a two-tour Vietnam Veteran and spent 25 years on active duty.

Wigger started shooting with his father in Montana. At Montana State College, he was a four-time All-American and enrolled in Army ROTC. He joined the Army in 1960 and after his basic course was assigned to the Army Marksmanship Unit. Wigger shot for the USAMU International Rifle Team until 1967. After a tour in Vietnam, he returned to the Marksmanship Unit and shot until 1970. Wigger again deployed to Vietnam and served as the officer in charge of the 23rd Infantry Division Sniper School. He then returned to the USAMU in 1972 and stayed until his retirement in 1987.

After he retired from the Army, Wigger served as the director of the U.S. Shooting Team until 1992. He now is a member of the USA Shooting Staff as a coach and representative and works as a match director.

“Lones Wigger was my role model and the reason I joined the Army,” said USAMU International Rifle shooter and 1996 Olympian Lt. Col. Robert E. Harbison. “As a youngster, he inspired me to set high goals and open my eyes to the fact that the Army can help us achieve our goals. I encourage everyone to vote for him.”

The U.S. Olympic Committee announced Feb. 27 the finalists for the U.S. Olympic Hall of Fame Class of 2008 and invited the public to vote online at www.USOlympicHallofFame.com to determine who will comprise the next class of inductees.

USOC Hall of Fame voting continues through March 28. Six individual Olympians, one Olympic team and one Paralympian, along with a coach, a veteran and a special contributor, will be honored during the U.S. Olympic Hall of Fame Induction Ceremony Presented by Allstate. The awards-show style ceremony will take place at 7 p.m. June 19 at the Joan W. and Irving B. Harris Theater in Chicago, Ill. Additionally, a nationally-televised special will enable sports fans across the United States to re-live the moments that catapulted the Class of 2008 inductees to U.S. Olympic Hall of Fame status. Envisioned as a lasting tribute to the pursuit of excellence and the Olympic ideals, the U.S. Olympic Hall of Fame was established to celebrate the achievements of America’s premier athletes in the modern Olympic Games.

“The U.S. Olympic Hall of Fame Induction Ceremony is a celebration of the unique spirit and heritage of the Olympic movement in America,” said USOC Chief Executive Officer Jim Scherr. “We appreciate the support of Allstate Insurance Company for their continued support of the U.S. Olympic Hall of Fame and their commitment to honoring the accomplishments of America’s Olympic greats and, in doing so, preserving the Olympic ideals.”

“Allstate is committed to celebrating and protecting the heritage and tradition of our U.S. Olympians and Paralympians,” said Lisa Cochrane, vice president of marketing at Allstate. “Our partnership with the USOC and our sponsorship of the U.S. Olympic Hall of Fame is a perfect way for us to honor the legacies of our country’s greatest athletes, while supporting today’s Olympians and Paralympians as they strive to deliver the next memorable performances in Beijing, and in future Games.”

The Class of 2008 finalists in the individual sport/event, team and Paralympic categories were selected by a nominating committee consisting of athletes, members of the U.S. Olympic Hall of Fame, historians and USOC representatives. The committee also selected the individuals to be honored in the coach, veteran and special contributor categories. Their names will be announced with the other inductees.

In addition to Allstate’s role as presenting sponsor for the U.S. Olympic Hall of Fame Induction Ceremony, AT&T and Kleenex will serve as supporting sponsors for the event.

The U.S. Olympic Hall of Fame Class of 2008 Finalists are: