Welcome to Indianapolis, Indiana. It is the 13th largest city in the United States. Marion County is the most populous county in the state of Indiana and is comprised of Indianapolis proper and three other cities. Almost 1 million people reside in Marion County, and a population that size presents a significant law enforcement challenge.

The Marion County Sheriff’s Office (MCSO) has over 1,000 paid and volunteer employees, 721 of which are deputies. Led by Sheriff John Layton and Chief Deputy Eva Talley-Sanders, the scope of this responsibility is difficult to grasp. In 2007, a realignment of responsibilities occurred between the MCSO and the Indianapolis Police Department. The MCSO’s Road Patrol and Investigations divisions were transferred to the Indianapolis Metropolitan Police Department, a new agency.

You can imagine that in a department with such a large jurisdiction and population to serve that there is a considerable amount of diversity within the MCSO’s responsibilities. The MCSO is currently made up of five divisions and roughly 25 units, which include everything from Communications, to K-9, to Jail and Tactical teams.

I asked Sheriff Layton what his greatest challenge is as the highest elected law enforcement officer in Marion County. “This economy has proven challenging to be able to best serve and protect the public, by keeping deputy staffing levels up, while being able to provide the highest level of security and safety.” 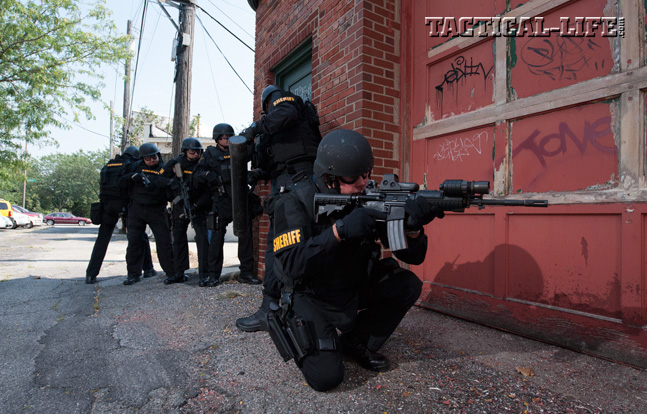 Big cities come with big policing challenges. The most alarming to citizens and law enforcement alike is the rising murder rate. The murder rate has increased substantially over the last year. My obvious next question: How is the MCSO dealing with this? This question would lead me down the path of understanding how the MCSO truly works. The roughly 300 deputies on the road are fulfilling other responsibilities of the MCSO, one of which is serving warrants. However, Sheriff Layton is committed to utilizing his deputies in any way necessary to help combat the rising murder rate, and the MCSO often works with other state and local law enforcement agencies to provide more officers on the ground when needed.

The MCSO’s warrant teams focus on finding and arresting violent felons that have outstanding warrants, in hopes of stopping these felons before they commit more crimes. Deputies serve civil warrants, such as those related to missed court dates, child support and tax situations, as well as criminal warrants on more hardened criminals issued by the Marion County courts. In 2012, MCSO deputies made 2,575 civil warrant arrests—twice the number of the previous year. This is in light of the number of warrants issued in 2012 being down from 7,739 in 2011 to 4,279. A third civil warrant team has recently been added in order to bring more violators to justice. In the same year, 7,057 criminal warrants were cleared: 3,000 felony, 1,800 violent offenses, 400 sex crimes, and the rest were probable-cause warrants.

Sexual crimes are a challenge for many departments across the nation. The MCSO incorporates the Sexual and Violent Offender Registry to help fight sexual and violent crimes by monitoring these registered individuals living within Marion County. This is one of the sheriff’s office’s strong areas of focus. The MCSO works closely with U.S. Marshals, Department of Homeland Security agents and other state and local agencies to ensure these known felons are in compliance.

Out of curiosity, I inquired about drug crimes and gang violence and how the MCSO approaches these issues. I was informed that any drug charges typically come up randomly during the course of serving warrants on more serious crimes. Drug crimes are addressed by other agencies. Any gang-related activities fall under the Gangs and Intelligence division, and this is mainly information collected from interviewing individuals in custody. Last year, MCSO deputies conducted 612 interviews collecting gang-related information.

One of the primary functions of the MCSO is to run the Marion County Jail. Everyone arrested within Marion County is processed at the Marion County Arrestee Processing Center. The average day brings 40 arrestees, with this number increasing to 100 to 120 per day over the weekend. Processing lasts a minimum of eight hours, and every arrestee goes before a judge. Court runs 18 hours a day.

The Marion County Jail is the only public jail in the state of Indiana that is accredited by the American Correctional Association. That accreditation is based on 366 standards, of which the Marion County Jail met 97 percent on its most recent audit. It’s a significant achievement to be able to maintain this accreditation while working with old facilities and antique architecture. The newest section of the jail was built in 1985, while the older section was built in 1965. Because of the old technology and infrastructure, the MCSO has to use more manpower to ensure the safety of the citizens of Marion County. There are hopes of building a newer facility in the future.

Jail Two houses the less serious offenders, those with charges that may be drug related. Only male inmates are housed in Jail Two. The City County Building is reserved for low-level female inmates. The emphasis here is more on programming. The other women are held in the Main Jail.

With over 650 deputies on the payroll working in various aspects of the sheriff’s office, training is of the utmost importance. The MCSO’s deputy training mirrors that of the Indiana Law Enforcement Academy. For 17 weeks each deputy will be trained on patrol stops, field sobriety tests, alcohol and tobacco laws, traffic laws, firearms, defensive tactics, stress in law enforcement, physical fitness, Spanish, jail procedures, person searches, use of force, Tasers, OC spray, building searches, drugs and narcotics, investigations, court room testimony, radio traffic, traffic control, domestic violence, emergency vehicle operation, edged weapons and weapon retention. The MCSO is currently seeking national accreditation for its training academy by the Commission on Accreditation of Law Enforcement Agencies (CALEA) and is very confident that the accreditation will be granted.

There are two special teams within the MCSO. The Sheriff’s Tactical Armed Response (STAR) team is similar to what we might commonly refer to as a SWAT team. The STAR team helps to execute high-risk warrants, will set up barricades in the case of violent offenders, and performs high-risk building entries in order to extract and detain fugitives. The STAR team is comprised of seven members that have passed a strict selection process. After selection, the deputy undergoes an additional training program and is subjected to ongoing monthly training at the minimum. The MCSO is in the process of expanding the team to 12 members, and selection is currently underway.

The Critical Emergency Response Team (CERT) works within the jail to manage situations ranging from typical shakedowns to cell extractions and riots. They are armed with heavy-duty less-lethal weapons and are specially trained in Krav Maga. Team Commander Lieutenant Rick Godan filled me in on the CERT acceptance process, which consists of an interview and psych evaluation. Once a candidate passes that, it’s on to military-style training for a week at Camp Atterbury, a military base located in southern Indiana. Then another 60 hours of training begins, designed to bring the team members up to speed on ground fighting, handling prisoners and weapons training. CERT operators also have an additional eight of hours of training per month.

I was fortunate enough to observe, up close, how the CERT team handles difficult inmates. The team gives ample warning to the inmate before more extreme measures are taken. At that point the men and women on CERT suit up in tactical gear, donning helmets, vests, gloves and less-lethal weapons, and get to work. It’s evident that they train often and seriously. Every movement is calculated and precise. It’s really quite intimidating to see the team working drills in unison. The STAR team and CERT members are on call 24/7. 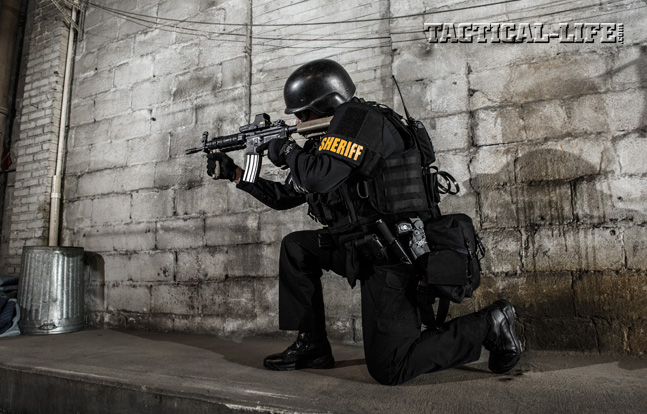 The STAR team is issued Glock 22s just like the other deputies. Their rifles are 16-inch-barreled AR-15s of various makers. The STAR team has been given leeway to choose which rifle will fit an individual team member’s needs. Until recently, there was a single sniper on the team. He deployed a trusted Remington 700 in .308 Winchester. But as the STAR team grows and changes, so too do the weapons systems, and they have ordered two FN SPR A3W rifles chambered in .308 Winchester. Each precision rifle will be outfitted with Leupold Mark 4 LR/T 6.5-20x50mm scopes and Harris HBRS bipods. The rifles will rest inside hard Pelican cases for transport.

The MCSO commissions a myriad of vehicles: Dodge Chargers, Crown Victorias, Mercury Grand Marquis, Ford Tauruses and Dodge Intrepids. The MCSO is responsible for inmate transportation as well as when an individual is taken into custody within the county. Paddy wagons are the ticket for these tasks, and Chevrolet and Ford vans are employed.

The MCSO 911 Call Center serves as the initial Public Safety Answering Point for all emergency and non-emergency calls in Marion County, and MCSO dispatchers coordinate and assign calls within seconds to patrol and investigations units for the MCSO, the Indianapolis Metropolitan Police Department, the Indianapolis Fire Department and over 25 other agencies with police powers. In 2012, dispatchers answered over 1 million calls to 911 and over 350,000 non-emergency calls.

Indianapolis was host to the 2012 Super Bowl, and it continues to host countless other conventions and events, such as the Indianapolis 500, MotoGP, Brickyard 400, Indiana Black Expo and NCAA basketball tournaments. In fact, in 2014 Indianapolis will open its arms to the NRA Annual Meeting. I couldn’t help but wonder how the MCSO fit into these various high-profile events and if these events presented any unique challenges for them. I was informed that those happenings are handled mainly by Metro Police, and that the MCSO helps by lending officers whenever and wherever they might be needed during these events. Beyond that, nothing really changes other than the potential for the jail and jail wagons to be a bit busier.

My time with the MCSO was a real eye-opener. The Marion County Sheriff’s Office is an LE agency not content with status quo. They are dynamic and evolving, which can be difficult for large agencies. By using tested and proven training techniques and focusing on improvement across all divisions, they are helping to ensure the safety of the residents of Indianapolis and its surrounding municipalities.