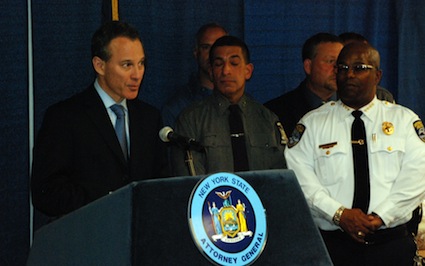 The legislation is called the National Right-to-Carry Reciprocity Act, and it would allow anyone with a valid permit to carry a concealed firearm in a state to do so in any other state. That means anyone who obtains a permit in a state with lax gun laws can still carry a firearm in states with strict regulations. Schneiderman said the legislation would gut law enforcement efforts to combat gun violence in New York.

“Stated simply, it would make the people of my state — where we have long-held standards intended to keep firearms out of the hands of those who should not have them — less safe,” Schneiderman, a Democrat in his first term as attorney general, wrote to Senate Majority Leader Harry Reid and Republican leader Sen. Mitch McConnell.