The following is an op-ed from Donald Mihalek, the Executive VP of the Federal Law Enforcement Officers Association Foundation.

Recently in Oklahoma, a 2A antagonist — as I’ll refer to him — attempted to perform what he called a “Second Amendment audit” in a local public park. This alleged “audit” included standing in the park with what looked to most like an AR-platform rifle, a pistol permit taped to it and a GoPro camera. 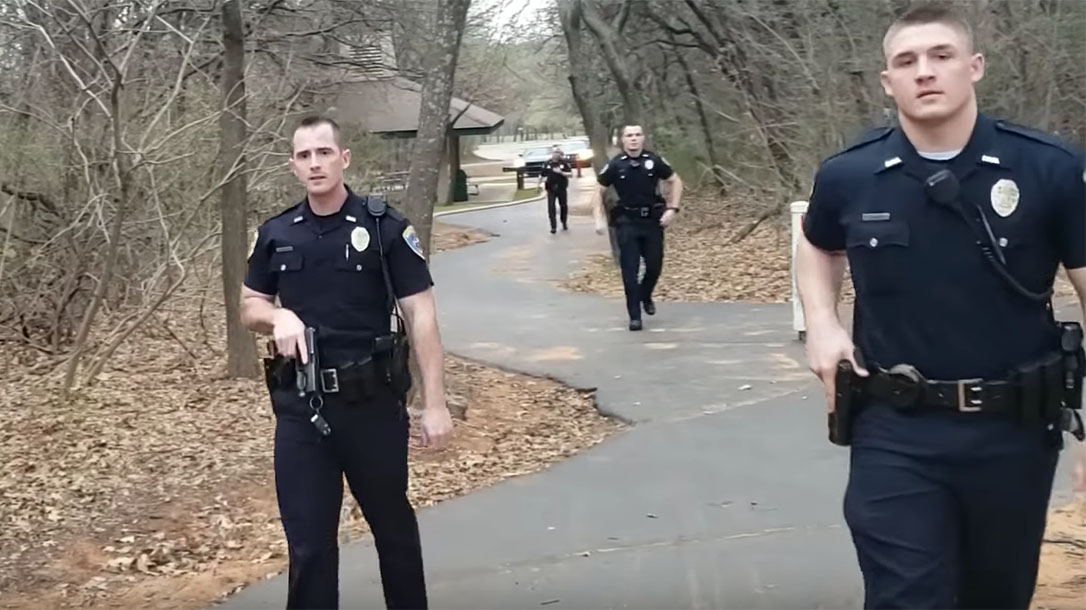 Of course the expected 9-1-1 calls came in. Officers who responded — in mass and with rifles in hand — were dispatched for a “man with an assault rifle” call in a public park. A park where parents and their children were spending a nice day trying to enjoy the park, until some guy with a “rifle” and the many police officers showed up.

According to the man, he was educating the public and police about Oklahoma open carry and Second Amendment rights. However, in my opinion, it was ill-conceived and dangerous. The only thing he did was paint Second Amendment activists as “extreme” in nature. He endangered the public, the police and himself. In reality, he’s lucky to be alive!

Legal Use of Force

We should commend the officers for their restrained response. Due to the danger, it would have been nice to see an arrest for Recklessness, Disorderly Conduct or Being a Public Nuisance, but I digress.

In this situation, as in others where an individual is holding a gun, officers would have been justified using deadly force. A “man with a gun” or “active shooter response” call triggers a response to the incident location where officers rapidly deploy. They then try to find and stop the threat. Due to the current active shooter threat and training most officers receive these days, things like verbal commands may not occur.

When they respond to a call for a “man with a gun,” an “active shooter,” or “shots fired,” and find an individual with a gun, the next step may be deadly force. Thanks to the Supreme Court case Graham v Connor, a “reasonable officer” standard is used for use of force incidents and in deadly force situations. If the officer perceives a threat to himself or others, they can and would be legally justified using deadly force.

Even in cases where an individual didn’t mean to pose a threat and may have otherwise been lawfully present and in possession of a firearm, a quick Internet search shows that in almost every case the officers are justified in using deadly force. How? Due to the “perceived threat” and rapidly evolving dynamic of a use of force situation.

In almost all of these cases, the police got a call for “man with a gun” and responded. Officers arrived, saw a man with a gun — who is usually unsure of what to do since, in their mind, they are a good guy — and shot the man. Tragic in some cases, but all judged lawful.

Since we are not in the 1800s anymore, most Americans barely know the difference between a pistol and rifle, but not much else. They definitely don’t know gun nomenclature, which is why most call AR-platform weapons an “assault” or “automatic” rifle. Most Americans certainly don’t know an AR pistol, which is what this “advocate” carried in the park.

So if someone is standing with what appears to be an AR-platform weapon, in almost every case they can expect the police to receive a call about a “man with an assault rifle.”

The impending 9-1-1 call for a “man with a gun” triggers an “active shooter” type response since every police department these days is hyper-sensitive to the active shooter threat. That call goes into the 9-1-1 dispatch center. It causes a cascade of events including: Multiple police units responding to the scene; maneuvering through traffic at a high rate of speed; notifications to the department’s command staff and potentially other agencies; an Incident Command System involves the fire department, while EMS and others may spin up; the community and media receive emergency alerts and inevitably converge on the scene.

The community explodes with lights, sirens and Blue Warriors running around with guns, heavy ballistic vests and helmets. In the Oklahoma open carry case, a park evacuated with panicked civilians. A day ruined because some guy holding an “assault rifle” felt it was his responsibility to conduct an audit. The result? Lots of police also running in with “assault rifles” and he created a potentially deadly situation.

It’s a dangerous dynamic when responding officers confront an individual at gun point; this was the case in the Oklahoma open carry incident. Such a situation elevates adrenaline and the potential for a shooting is literally at the trigger point. The individual, like many others, missed this concept when recklessly conducting his “audit.”

No one in law enforcement would try to infringe on an individual’s Second Amendment rights. However, when those rights use no common sense, while recklessly and dangerously putting others at risk, the end result could be a hail of bullets in the individual’s center mass.