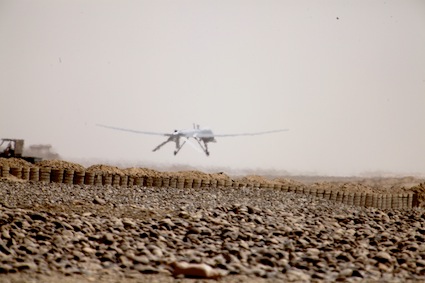 On Friday, he joked to an auditorium full of troops at a base in Naples, Italy, that “obviously I have a helluva lot more weapons available to me in this job than I had at the CIA.” Then he added, as an aside, “Although the Predators aren’t that bad.”

And at a stop at Sigonella air station a short time later, he was ticking off the attributes of the coalition forces there who have been participating in the Libya operation.

Standing in front of a Global Hawk surveillance drone, he observed that the troops have used the unarmed aircraft in missions over Libya, as well as the armed Predators. And then he added that the Predators were “something I was very familiar with in my last job.”