by Jorge Amselle
in News
0

Everyone knows R. Lee Ermey. If you haven’t seen him in one of his many movie roles, usually playing a military man, police officer or other authority figure—most famously as Gunnery Sergeant Hartman in the 1987 Stanley Kubrick classic Full Metal Jacket—you’ve probably seen him on TV commercials and military history shows. Your kids have likely heard his voice in multiple cartoons and video games.

Ermey earned his stripes in the U.S. Marine Corps and served in Vietnam. Since then he has remained active, supporting vet organizations and visiting troops. He is also an extremely active member of the NRA’s Board of Directors, often speaking out on Second Amendment issues. A lifelong hunter and shooter, RF recently caught up with him at the Civilian Marksmanship Program National Rifle Matches at Camp Perry, Ohio, where he competes using vintage rifles.

MY FIRST GUN: It was a Daisy Red Ryder BB gun, and right after that I progressed to a .22 bolt-action rifle. The Daisy was a Christmas gift when I was seven years old, and Santa also brought me the .22 rifle the following year. I hunted a lot growing up in Kansas, and we had a lot of squirrels, too many squirrels and rabbits, and I was helping to cull the population. I got my use out of those guns, and they were pretty worn out by the time I was done with them.

IF I ONLY HAD ONE: There is no question: it would be a .30-06 bolt-action rifle. Plain and simple. You can hunt any animal in North America with a .30-06. It’s the most versatile round that there is in existence as far as I’m concerned. 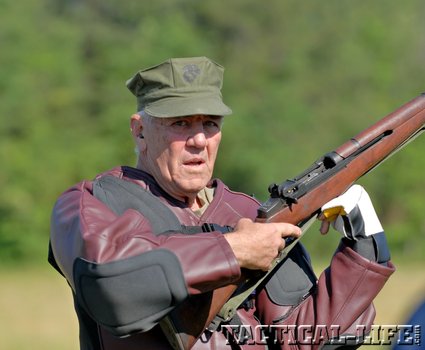 MY MENTOR, LESSONS: The Marine Corps is the place I really received proper leadership and guidance at MCRD San Diego, from those three drill instructors, Sergeant Freestone, Gunnery Sergeant Spottenberg and Sergeant Devorak. Those guys were life-changers, and any young man who goes through Marine Corps training could tell you the same thing. The Marine Corps has been a larger part of my life, even more than my family, and I owe the Corps a tremendous amount.

MOST MEMORABLE MOMENT: One of my most vivid memories is when I had a bunker go down on me in Vietnam. That one tends to stand out pretty good. I also lived in the Philippines and Okinawa after I retired from the Marines and I was single. That was a lot of fun.

SHOOTING TENDENCIES: I try to shoot the same way every time and make it a habit: seating the rifle in my shoulder the same way, taking a couple of deep breaths and relaxing. I don’t think I have any unusual little shooting quirks that I know of, or that anyone has ever pointed out. 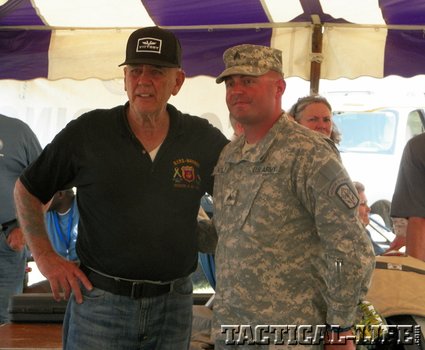 FAVORITE TYPE OF SHOOTING: As team captain of SOG Specialty Knives & Tools Shooting Team, a.k.a. Team SOG, I shoot high-power rifle and vintage service-rifle competitions using the M1 Garand, the M1A1 and the ’03. I most like to shoot from the prone position at the 200-yard line. I generally do quite well there, although I like shooting at any distance.

HOW SHOOTING INFLUENCES ME: My interest in shooting has influenced me very much in supporting our Second Amendment rights, to the point of becoming a life member of the NRA and serving on the NRA Board of Directors. I am a firm believer that it is our God-given right to protect ourselves and we need our rifles and handguns. I think it should be a requirement that everyone be armed. If your family is ever attacked and you don’t have the means with which to protect them, shame on you.

MY GREATEST SHOT: It was last year on a lion about 40 yards away. We were hunting a nuisance lion in Africa, and what you do is you track them and chase them until they get tired and become angry enough to turn and come after you. I fired one round which clipped his chin and went right into his chest. As I was looking down my sights and that lion was coming, I was thinking to myself, “This is the most important shot of your life.”

MY CHOICE OF FOXHOLE PARTNER: If I had to pick someone to be in a foxhole with me and we were in a shooting war, it would be Dennis DeMille (GM of Creedmoor Sports), a retired Marine chief warrant officer. He is a shooting machine, either standing or in the prone position, and he just doesn’t miss. He has won the national shooting championships multiple times and currently holds many national records.

ADVICE I’D GIVE A YOUNGER ME: My advice to any young man is to wait until you are where you want to be in life before deciding to get married. Don’t get married until you achieve a certain amount of success and are satisfied with it. Once you have a family you have to do what it takes to support them instead of devoting yourself to attaining professional goals.