A man was caught on a Raleigh police body camera punching, grabbing and even biting officers before he was eventually subdued and taken into custody. 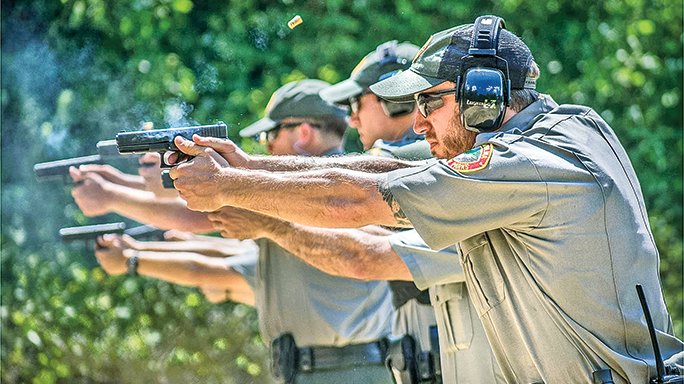 The Associated Press reports that officers arrived at the intersection of Garner Road and Martin Luther King Boulevard last Friday after getting a call about a car left unoccupied with music playing loudly. The suspect, 44-year-old Frederick Darnell Hall, was found walking with no shirt or shoes on. Raleigh police said Hall appeared to be agitated and “in an altered state.”

According to WRAL, Hall was ordered to calm down, but instead became violent. The video captures Hall repeatedly swinging and punching at officers. Eventually, he gets taken down to the ground, which is when he starts biting a female LEO.

Six Raleigh police officers used batons and fists to get Hall under control.

No Charges For Raleigh Police

After reviewing the available footage from the incident, Wake County District Attorney Lorrin Freeman said the Raleigh police officers would not face charges.

“While this incident is unfortunate and troubling to watch, law enforcement officers are authorized under the law to use force to stop an attack when necessary,” Freeman said in a statement. “In this case, officers twice attempted to subdue Mr. Hall by using a Taser prior to using other force. The actions of the officers involved in this incident do not rise to the level of criminal assault.”

To get a more complete view of this incident, watch the playlist below, which compiles the body cameras of all the officers involved: