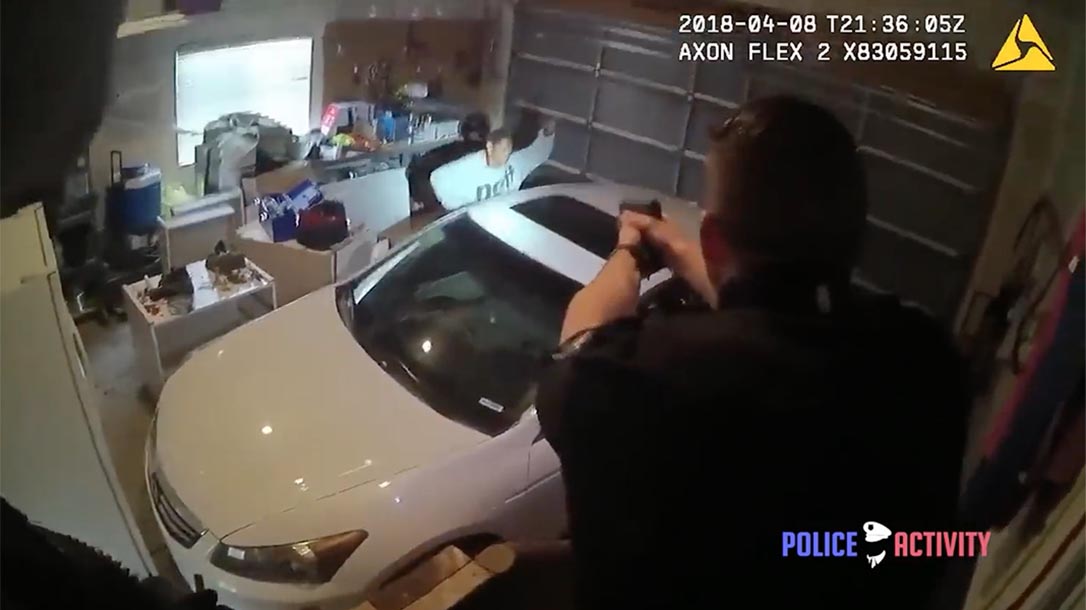 At around 5:30 p.m. on Monday, May 14, RPD Officer Michael Nyantakyi was on patrol when he saw Peters driving a sedan that hit another vehicle at an intersection. Peters quickly sped from the scene. Nyantakyi gave chase northbound and onto the I-95 on-ramp, the RPD press release says.

Peters hit two other cars on the on-ramp and lost control of his car. His vehicle disabled, Peters got out of his car and ran into the northbound lanes of I-95. He was completely naked. In the body cam footage, he appears to be struck by one of the passing vehicles. After rolling around on the ground for a few seconds, he suddenly gets up and starts walking toward Nyantakyi, who by this point had pulled out a Taser.

“Put that Taser down or I’ll kill you,” Peters can clearly be heard saying.

Nyantakyi deploys the Taser, but it has no effect on Peters.

Peters then starts charging at Nyantakyi. That’s when Nyantakyi draws his duty gun and opens fire, shooting Peters twice in the abdomen.

Police transported Peters to a hospital, where he died later that night.

Peters’ family issued a statement stating that the shooting was unjustified. They also demanded to see Nyantakyi’s body camera footage from the incident.

“Here are some facts I want the world to take into consideration,” Peters’ sister Princess Blanding said. “Marcus was clearly in distress, he was in need of help. Marcus was unarmed yet the police officer found it was necessary to use deadly forces, therefore killing my brother.”

“Our family wants to see the body cameras, dashboard cameras, the official police report. Marcus was an unarmed black man killed by a police officer who made the decision that because a taser wasn’t effective, the only other choice was to kill him. Why are police officers not equipped with sedatives they could have used a sedative to control the situation and stabilize Marcus.”

“We are all deeply affected by what happened here – by the loss of life,” said Chief Durham. “Our officers do not take the use of deadly force lightly. I think it’s important to remember that being naked does not remove a threat.”

Durham released the body cam footage this past Friday.

“I want to clear the air and set the record straight,” Durham said of his decision to release the unedited video. “There is so much misinformation out there right now. The facts are what should matter here.”

Nyantakyi, a 10-year veteran of the Richmond Police Department, is currently on leave pending the results of the investigation into the shooting.