The Seattle Police Department has released body and dash cam footage showing the fatal shooting of a man who shot at LEOs, fled the scene on foot, committed a home invasion and stole the resident’s car, crashed the car and then ignored officers’ commanders to stop reaching for his gun. Watch the graphic footage above. 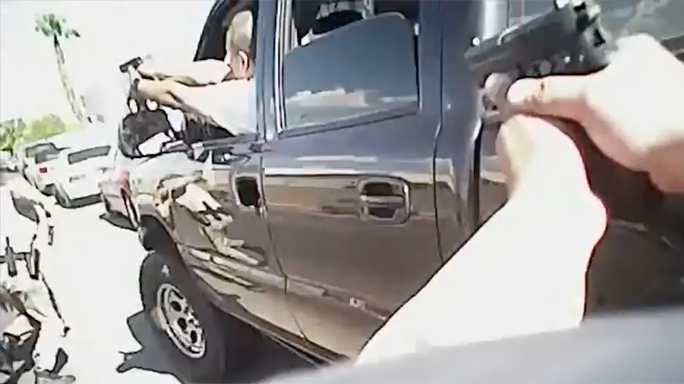 As The Seattle Times points out, the video takes the nearly hour-long incident and condenses it into two and a half minutes. It shows body cam footage of the suspect opening fire on the Seattle police officer; the officer returning fire; dash cam footage of the suspect crashing his car; and the final confrontation which ended with the suspect getting shot and killed. For a more complete picture of what went down that night, read the presser from the SPD below.

At approximately 4:20 a.m., officers responded to the 6000 block of 34th Avenue NE for a report of a car prowl in progress. When officers arrived, they observed the adult male suspect inside a parked car.

Additional officers and a K9 team responded to the area and began actively searching for the suspect.

The suspect broke into a home in the 6000 block of 27th Avenue NE and stole a vehicle from the residents at gunpoint. There were no reports of injuries during this robbery.

The suspect fled in the stolen vehicle before crashing it near NE 55 Street and 26th Avenue NE.

Officers attempted to take the suspect into custody at the collision scene.

During the encounter, one officer fired, striking the suspect.

Several officers provided first aid to the wounded suspect. Seattle Fire Department responded and declared the suspect deceased at the scene. Detectives recovered a handgun from inside the stolen vehicle.