by Jack Satterfield
in Military, News
0

0
SHARES
2
VIEWS
Share on FacebookShare on Twitter
When is a ShadowHawk Rotary UAV drone a handy tool to have?

You are Neils Sørensen, master of MV Danica Force, a crude-oil tanker displacing more than 106,000 metric tons of deadweight. Launched in 2007 under Danish registry, your Aframax-class vessel is 754.59 feet long at the waterline, with a 137.79-foot beam and fully laden draught of more than 32.81 feet. You and your 23-man crew embarked from Saudi Arabia’s Jubail Commercial Seaport in the Persian Gulf with nearly 50 metric tons of Arabian light crude, headed for the Shell/BP Sapref Durban Refinery in Durban, South Africa. Your course will take you through the glassy waters of the Arabian Sea, past the Comoros Islands and into the Mozambique Channel to Durban, no more than 100 nautical miles off the East African coastline.

To reach port, however, you must pass Somalia, through the heart of the world’s most active and dangerous seaborne-piracy region. Your ship’s top speed is less than 12 knots, so outrunning a motorized pirate dhow is out of the question. The only weapon on board is a pistol locked in your office safe. You hope you can make this run without contact. You know the critical time is eight to 12 days out of port as you pass the Somali coast—it is the morning of the ninth day. Sure enough, a dhow is hull up to starboard and approaching fast. In the wheelhouse, you hope that it won’t engage. It keeps coming, its brazen intent all too clear. Suddenly, you see a small, almost toy-like craft fly to the dhow, then hover above it. It circles, then flies away. Just as suddenly, the dhow slows and turns in retreat as a patrol vessel appears. The dhow is fast, but the patrol boat is faster and has a bone in its teeth. You whistle slowly to hide your relieved sigh as your voyage to Durban continues, uneventful.

Serious Capabilities
Commercial seamen who ply the Arabian Sea and Indian Ocean near Somalia pray for this scenario. Today, their prayers are being answered by Vanguard Defense Industries’ ShadowHawk Rotary UAV, a rotary-wing mini-UAV now handling anti-piracy surveillance missions off the East African coast. The ShadowHawk Rotary UAV is a fully autonomous craft with automatic takeoff and landing capabilities as well as waypoint navigation. The mini-UAV is just 7 feet long and weighs 49 pounds with a top speed of 70 miles per hour at altitudes up to 15,000 mean sea level. It can carry payloads up to 20 pounds and be built with either turbine or piston engines. The ShadowHawk’s rotary-wing configuration enables the UAV to launch in 25-knot winds, sustain flight through gusts of 45 knots and keep the camera stable at up to 25 knots. It carries an electro-optical and forward-looking infrared (FLIR) camera with a 21X lens for day or night observation. The ShadowHawk can operate up to 22 miles from its takeoff point and remain in the air up to 3 hours with a piston engine, depending on operational ceiling and payload. Turbine engine endurance is about 1 hour. The UAV can carry a light weapon load, including a grenade launcher, precision-guided munitions and less-lethal systems. The platform can also carry a laser designator capable of painting targets for ordnance delivery from other platforms. The system is designed specifically for tactical military, law enforcement and other commercial security requirements. 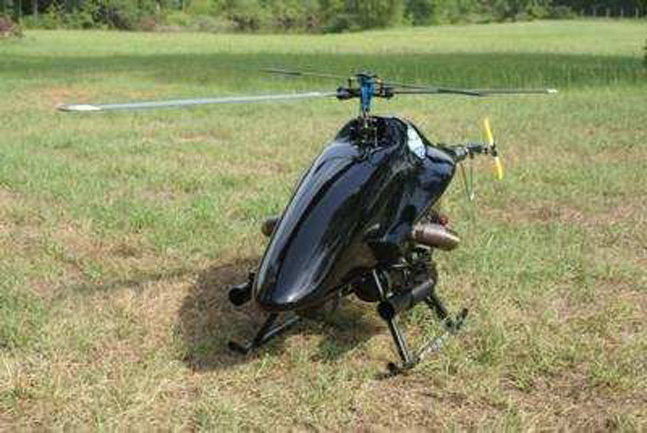 Auspicious Beginnings
The ShadowHawk is a new platform. According to Michael Buscher, Vanguard Defense Industries CEO, development began in mid-2008. Buscher, a former U.S. Army Special Operations officer with service in both Iraq and Afghanistan, had plenty of firsthand experience dealing with significant gaps in Intelligence, Surveillance & Reconnaissance (ISR) at the tactical operation level. “My personnel experience with platforms such as the Raven and Scan Eagle taught me that a more cost-effective system was in demand and that lives quite literally hung in the balance,” Buscher said. “We were also struck by the significant advantages that rotary wing had over fixed wing as an observation platform.”

“We chose a rotary-wing configuration for a couple of important reasons,” Buscher continued. “First, helicopters of this size and weight operate better than fixed-wing aircraft in higher winds. For example, some small fixed-wing UAVs have proven difficult to control, are unstable video platforms in winds over 10 knots and have to complete orbits to get eyes on targets that go to ground. The ShadowHawk is much more stable, even in winds up to 40 knots, and can hover over a stationary target to maintain contact.”

Another aspect of development set ShadowHawk apart from other mini-UAVs. “Despite our high level of experience and understanding of existing UAV technology gaps, we did what most UAV manufactures fail to do,” Buscher explained. “We actually went out to the law enforcement and military community first and asked what they were seeking in a UAV platform. After spending nearly six months gathering requirements and a lengthy consumer ‘wish list,’ we then went to the drawing board to meet those needs.”

Buscher added that the greatest challenge lay in meeting the endurance requirement of more than 2 hours while developing a platform small enough (under 50 pounds and less than 7 feet long) to fit easily in an SUV or HMMWV. Meeting the operational requirements for payload, altitude, stability, weaponization and target designation also was difficult, since no single platform had all of these capabilities. “We were fortunate to embed our program with a local Sheriff’s Department as well as the military to help in the system’s R&D and beta-testing,” Buscher added. “After nearly two years we had completed the platform and met or exceeded every requirement set forth by both markets.”

All Systems Go
The ShadowHawk is designed for a wide variety of missions, including perimeter security, surveillance missions and direct-action operations. Law enforcement missions include surveillance for high-risk warrants, counter-narcotics operations, search and rescue, as well as emergency management. Military applications include the ISR missions as well as high-value target designation or direct-attack missions. Commercial applications include current anti-piracy operations off of East Africa, plant and field perimeter security operations of facilities in high-risk regions such as Iraq and Nigeria, oil rig and pipeline inspections, surveying, executive convoy escort, aerial photography and TV news broadcasting.

Several ShadowHawks have already proven their capabilities in anti-piracy operations. Although the mission is classified, a large corporation is using the min-UAVs for security surveillance, extending the observation range of a small security vessel. Although Vanguard would have preferred to launch and recover from large oil-drilling ships or platforms, this was not an option. So Vanguard has incorporated significant hardware and avionics software improvements in the ShadowHawk and increased its operator training program to include a prerequisite FAA ground-school certification. ShadowHawks are operating daily from security vessels and are integrated into a multi-tiered security program that includes ship-based surface contact radar. The program now provides clients early possible-pirate-threat warnings at distances up to 17 miles from a protected vessel, an unprecedented improvement to the region’s commercial maritime security operations where standard responses to requests for help can take up to four days.

Vanguard cites many ShadowHawk operational advantages, including continuous, computer-controlled flight capability with safe autorotation capability to the ground in emergencies plus minimal, inexpensive maintenance; launch within minutes of mission authorization; five-minute refueling; operational costs just over 10 percent of a manned helicopter; fuel consumption of 1.5 gallons per hour compared to 28 gallons per hour for a Bell Jet Ranger; the ability to watch an area at 700 feet without being observed from the ground; the ability to operate from a 20-by-20-foot cargo container at sea; safe, low-altitude flight for pipeline, railway or IED inspection; and network-centric capabilities that permit real-time in-flight updates for mission changes. The system costs roughly half that of competing UAS platforms and a fraction of what manned helicopters with similar capabilities do.

Current R&D efforts include doubling the ShadowHawk’s endurance capabilities to nearly 6 hours with an advanced second-generation power plant and improvements to the current optics package and weaponization options. In addition, Buscher noted that the U.S. Army has expressed strong interest in the platform and in scaling it up in size to carry a variety of larger, heavier weapons such as chain guns, the M134 Gatling gun and larger precision-guided missiles like the AGM-114 Hellfire.