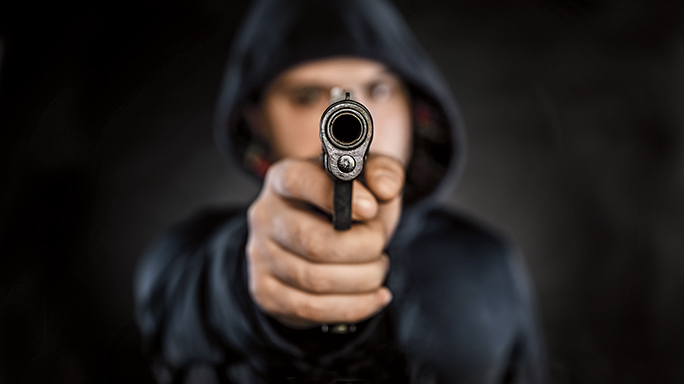 Hutton responded to a 3:14 AM call, describing a suspect entering semi-trucks at a local truck stop. Upon arrival, he spoke to the caller, who gave details of the crime in progress, pointing out the last location of the suspect.

Deputy Hutton arrived at the back of the truck and did a perimeter search, finding nothing. Noticing a door open on the bag of the trailer, he shone his flashlight into the interior, to investigate further. As he illuminated the interior, a hidden gunman leaned out from behind the closed door and shot Hutton three times.

The gunman, a 25-year-old Ohio native, was currently on the run, in connection with a murder days before, in his hometown. Although his motives are unclear, in a final act of desperation the gunman took his own life in a nearby field.

Deputy Hutton received gunshot wounds to the hand, arm and torso, before returning fire and retreating to safety. Although he was wearing a bulletproof vest, it was not struck by any of the gunfire. Twenty minutes later, other deputies arrived and provided medical assistance. Having sustained three gunshot wounds Deputy Michael Hutton was transported to a hospital in Hugo, before being flown to Englewood.

After remaining in the hospital for a week, for treatment, Deputy Hutton emerged to a relieved crowd of his comrades. As a nurse pushed him through the lineup of his fellow officers and family, in a wheelchair, Hutton received a hero’s salute.

Captain Michael Yowell, of the Lincoln County Sheriff’s Office told CBS Denver, “It is an honor, and it is a privilege to be here today to get him home.”

In honor of his service in the face of dire circumstances, Hutton’s fellow officers brought his patrol vehicle to pick him up.

As he sat in the vehicle, Hutton told CBS Denver, “I’m doing much better now. Just happy to go home. Thank you for all your support, thank you everyone. I got lucky, I got lucky.”

He was met by a hero’s welcome, in parade fashion, as people lined the street in Hugo to welcome him home.

Tactical Life Magazine would like to welcome you home and thank you for your service Deputy Hutton. Your service shines as an example of true integrity in the line of duty. And your calm demeanor under fire, after sustaining multiple injuries, is what a hero looks like.