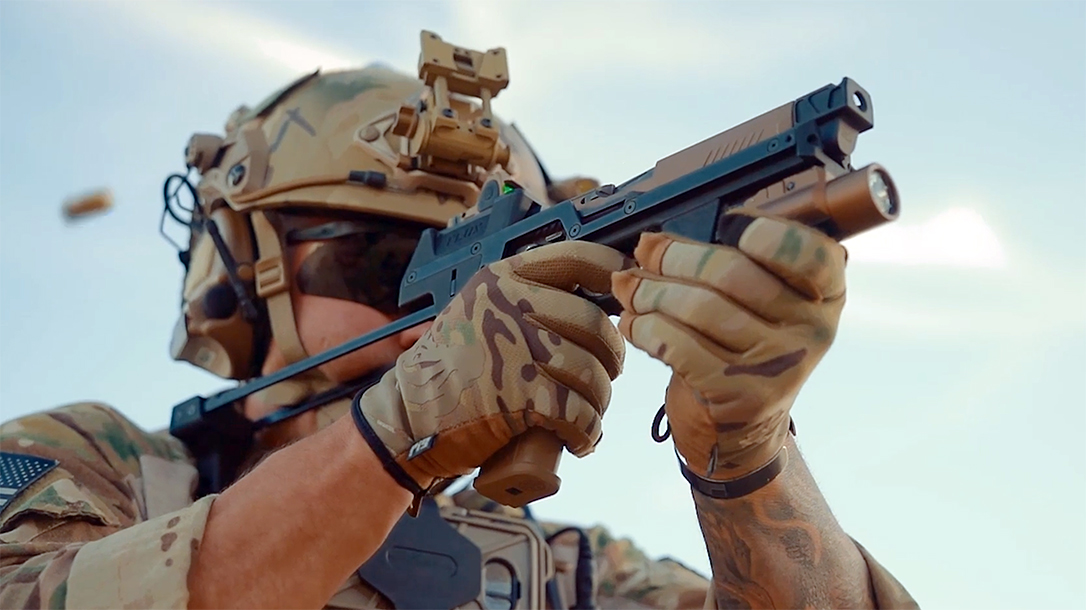 Major Jose Anzaldua, USMC (Ret.) volunteered for the U.S. Marine Corps in 1968 at the height of the Vietnam War. He served until his retirement in 1992 after 24-years of service. On Jan. 23, 1970, Corporal Anzaldua was taken prisoner of war and imprisoned for 1,160 days in a jungle POW camp.

He also spent time in prisons in North Vietnam, including the infamous “Hanoi Hilton.” He was eventually released on March 7, 1974 during Operation Homecoming.

1911 Pistol: U.S. forces carried the 1911 throughout the Vietnam War, and by Major Anzaldua throughout his service. The commemorative 1911 POW pistol features a high-polish DLC finish on both the frame and slide, and is chambered in .45 AUTO with an SAO trigger. All pistol engravings use 24k gold.

Top Slide Engraving: Engraved oak leaf insignia representing the Major’s rank at the time of retirement and a pair of dog tags inscribed with the date, latitude and longitude of the location where Major Anzaldua was taken as a prisoner, and the phrase “You Are Not Forgotten” taken from the POW-MIA flag.

DeSantis Holsters provided a holster, a replica of those used by U.S. forces during the Vietnam War.

Once a Marine, Always a Marine

Additionally, SIG SAUER produced the video, “Once a Marine, Always a Marine: The Story of Major Jose Anzaldua,” to honor Major Anzaldua’s service to our country. This documentary chronicles Major Anzaldua’s time in captivity as a prisoner of war. It features the 1911 commemorative pistol, and interviews with Major Jose Anzaldua, Ron Cohen, President and CEO, SIG SAUER, Inc., Tim Butler of SIG Custom Works, and members of the Anzaldua family.