The Bismarck Police Department in North Dakota has selected the Sig Sauer P320 as its new duty pistol, joining a growing list of law enforcement agencies adopting the popular gun. 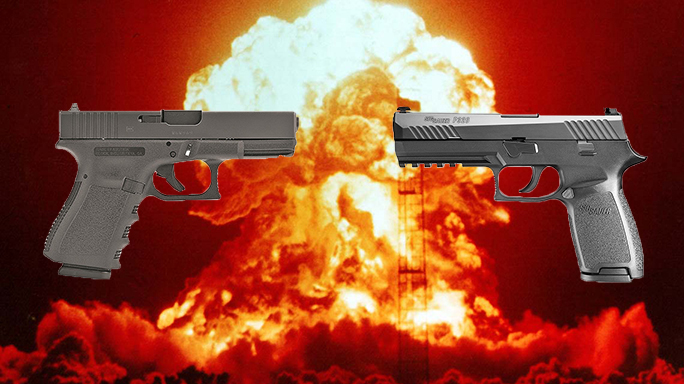 According to Sig’s press release, the city commission in Bismarck earmarked money to buy 140 P320 handguns. All handguns are equipped with the X-Ray3 day/night sights. This ensures fast sight acquisition regardless of the lighting situation.

“The department needs to replace our handguns due to some documented malfunctions and reliability concerns over the last couple of years,” Bismarck Police Chief Dan Donlin said.

The presser doesn’t mention it, but the Bismarck Police Department has been using Smith & Wesson M&P handguns.

There were evidently four contenders in the running to replace the BPD’s M&P pistols: the Sig P320, the Smith & Wesson M&P M2.0, and the Glock 17 and 19. The Department’s team of certified firearms instructors spent time putting rounds through each. The P320 won out in the end.

“The Sig Sauer, in the majority of opinions, outperformed the Glock,” Donlin said. “It provided a lot more overall comfort and handling in the varying hand sizes of our officers,” referring to the P320’s three grip module sizes. “The Sig, out of the box, was very accurate. Even our best shooters couldn’t believe how much better they shot with the Sig versus the Glock.”

Released in 2014, the striker-fired Sig Sauer P320 is offered in 9mm, .357 Sig, .40 S&W and .45 ACP. It’s currently available in 11 different configurations. This ranges from the X-Five Full-Size with a five-inch barrel to the Nitron Subcompact with a 3.6-inch barrel. In addition, the gun serves as the basis for the U.S. Army’s Modular Handgun System, which replaced the aging Beretta M9 as the service’s sidearm.

“Sig Sauer is very proud to have been chosen by the Bismarck Police Department,” said Tom Jankiewicz, Sig’s executive vice president of law enforcement sales. “The P320 was chosen because of its modularity, accuracy and most importantly its reliability. These officers put their lives on the line, and we’re humbled to have our products chosen to help keep them safe.”