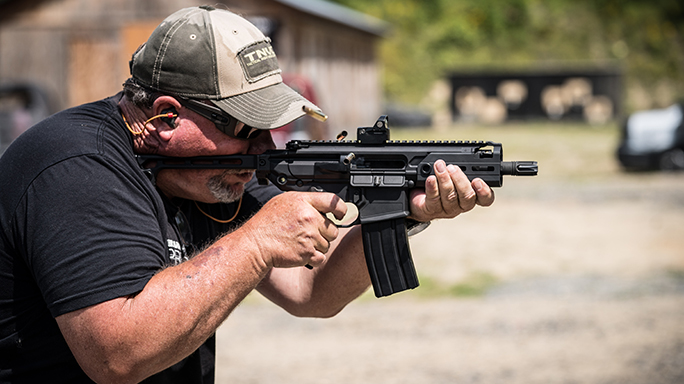 This is a five-year contract worth $48 million for the acquisition of what the DoD is calling the “Suppressed Upper Receiver Group.” The suppressed upper will be paired with USSOCOM’s M4A1 rifle. Most of the work will be done at SIG’s Newington, N.H. facility. The estimated completion date is July 2023. Check out the full announcement below:

Sig Sauer Inc., Newington, New Hampshire, was awarded a $48,000,000 five-year, indefinite-delivery/indefinite-quantity, firm-fixed-price contract for the acquisition of the Suppressed Upper Receiver Group (SURG). The SURG weapon is an upgrade of the M4A1 lower receiver group in support of U.S. Special Operations Command (USSOCOM) Procurement Division. Fiscal 2018 procurement funds in the amount of $24,620 are being obligated at the time of award. The majority of the work will be performed in Newington, New Hampshire, and is expected to be completed by July 2023. This contract was awarded through full and open competition. USSOCOM headquarters, MacDill Air Force Base, Florida, is the contracting activity (H92430-18-D-0005).

As you can see, the announcement doesn’t specify which upper SIG is supplying to USSOCOM. Earlier this year, the company unveiled the SUR300, an integrally suppressed upper receiver in .300 BLK compatible with the SIG MCX and standard AR-15 lowers. It uses a short-stroke gas piston system, and features a 6.75-inch cold hammer-forged barrel with a permanently attached 19 baffle titanium suppressor; free-float M-LOK handguard; and 2-position gas valve tuned for subsonic and supersonic ammunition. In addition, it comes with SIG’s Matchlite Duo two-stage trigger, as well as an adapter that lets you remove the buffer tube and accept SIG 1913 stocks.