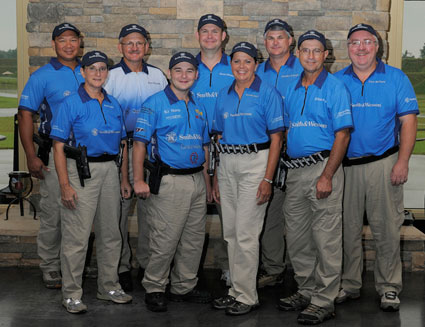 Doug Koenig
In May, Professional Shooter Doug Koenig began the season on a high note capturing his 11th National Rifle Association (NRA) National Action Pistol Championship. As the overall winner of the NRA’s 30th Bianchi Cup, Koenig has won more titles than any other shooter in the history of the event. Koenig captured a second title in June as part of the Sportsman’s Team Challenge before going on to win the 2008 Masters Shooting Championship. During the 23rd Annual Masters Championship, Koenig claimed his tenth consecutive Masters title since first competing in 1999. Koenig finished the season strong, winning the World Action Pistol title in New Zealand. His dominance of precision-based action shooting events is unparalleled by any other shooter in the world.

B.J. Norris
As one of the youngest members of Team Smith & Wesson, B.J. Norris demonstrated that he has the necessary skills to be a contender in the highest levels of competition. During 2008, Norris earned two state level wins, one national level win and two world level victories. His productive season was highlighted by winning the Steel Master Division at the Steel Challenge/World Speed Shooting Championships. Norris currently holds three of the eight world records in Steel Challenge Shooting Association (SCSA) shooting.

“On behalf of Smith & Wesson, I would like to congratulate all of the members of Team Smith & Wesson on a tremendous season,” said Tom Kelly, Vice President of Marketing for Smith & Wesson. “We are very pleased to have such a world-class group of men and women, with a variety of talents and backgrounds, competing under the Team Smith & Wesson banner. Each member is a valued asset to our company and a great ambassador for the shooting sports.”

For more information regarding Team Smith & Wesson, visit the Smith & Wesson website at www.smith-wesson.com and click the Champions icon on the homepage.