A Texas police helicopter captured a gunfight between a suspect and a Department of Public Safety trooper that ended with the suspect’s death. Watch the footage above. 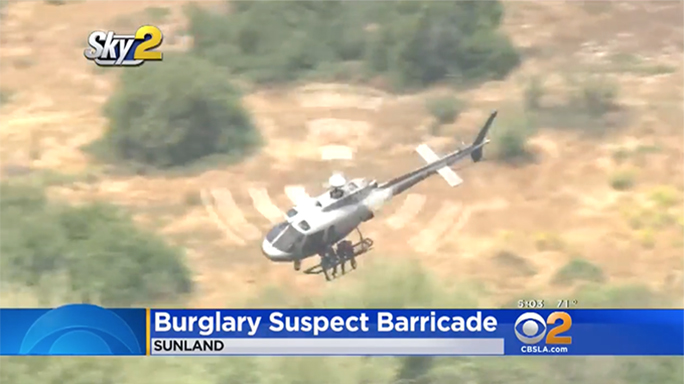 CBS affiliate KENS5 reports that the incident began to unfold on Sunday, Feb. 18 when a DPS trooper pulled over 33-year-old Ernest Montelongo in east Bexar County for an unspecified reason. During the traffic stop, Montelongo allegedly gave the trooper a false name and fled the scene, sparking off a high-speed chase.

The trooper lost sight of the Chrysler 300 during the chase, prompting him to radio a DPS aircraft crew that he needed help locating the vehicle. A helicopter responded shortly thereafter informing the trooper that the suspect was traveling westbound on I-10.

In the video above, the helicopter provides the troopers with updates pertaining to Montelongo’s location. At one point, the vehicle Montelongo is driving loses a tire.

Eventually, troopers catch up to the vehicle as it drives the wrong way up an exit ramp.

As the DPS vehicle catches up with Montelongo’s car, his driver’s side door opens. The police helicopter then warns the troopers that Montelongo was reaching for something under the floorboard.

“He’s under the floorboard guys. Be careful. Be careful,” the DPS pilot says.

That’s when Montelongo gets out of his car, raises a gun and fires it at a trooper, shooting him in the arm. Another trooper returns fire, striking Montelongo.

A trooper can then be seen running over and tying a tourniquet onto the wounded trooper’s right arm. That trooper was transported to an area hospital in the DPS helicopter and survived, KSAT reported.

Montelongo died of his injuries at San Antonio Military Medical Center the next day.