The Tulsa Police Department has released body camera footage showing a gunfight that resulted in an officer getting shot in the leg and the armed suspect taking a round to the chest. Watch this officer-involved shooting above. 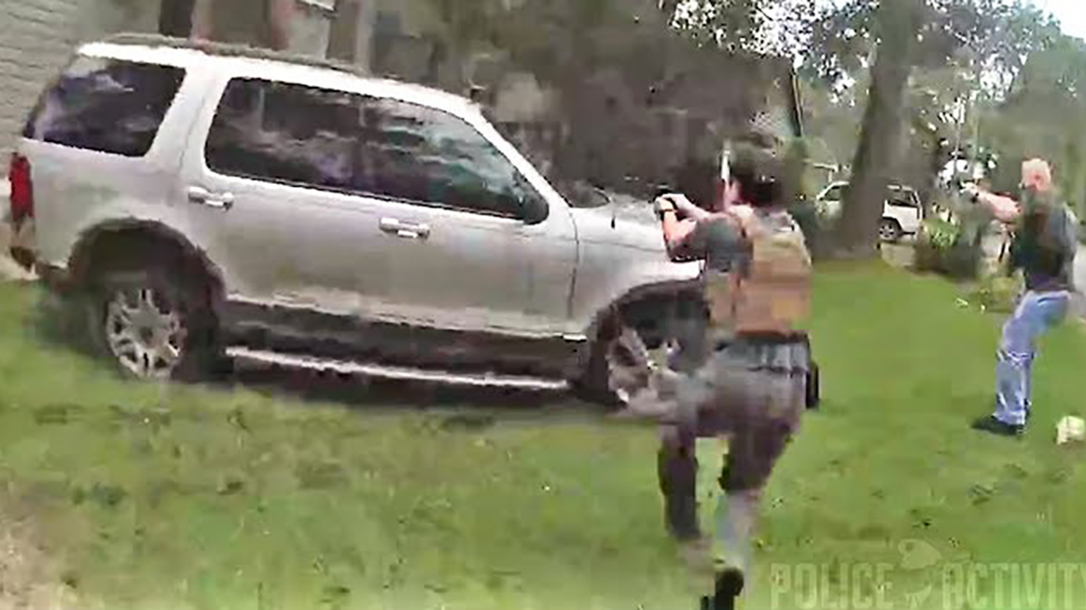 Tulsa World says Officers M. Cawiezell and D. Bean first stopped to talk to 34-year-old John Chatman at around 1:15 p.m. on July 3 in a motel parking lot. Chatman and a female companion were in a parked minivan, and after a brief interaction with the officers, Chatman drove away.

While Chatman drove away, the officers checked and discovered his van’s tags didn’t the match the vehicle. With this knowledge, they pulled him over at a QuikTrip gas pump.

Eventually, Sgt. M. Parsons arrived on the scene with a pepperball gun.

“He’s getting ready to hit you with the pepperballs. A lot of them. [If] you step out here, you go in handcuffs; you can give her a kiss,” a Tulsa police gang unit officer tells Chatman. “We can do this the hard way, or we can do it that way. That’s it.”

“At the point when he says, ‘Just shoot me,’ it was apparent he was not going to be getting out of the vehicle,” Tulsa Police Sgt. Shane Tuell later said, adding, “we tried every option we could in that close proximity to get him to get out.”

Parsons shoots the pepperball gun at around the 19:20 mark in the video. Seconds later, Chatman opens fire on police. The officers return fire and get cover. During the shootout, Parsons was shot in the thigh. Chatman was hit in the chest. Chatman reportedly fired his gun four times.

“We did not know he had a firearm on him,” Tuell said. “Had we known that individual had a firearm, we would have cleared the lot and backed off.”

Medical personnel arrived on the scene and transported Chatman to a hospital. He is expected to survive. When he gets out, he’ll be facing three counts of shooting with intent to kill; possession of a firearm after a felony conviction; obstruction; driving under suspension; and driving with an improper tag.

Chatman has a rap sheet that includes a prison stint for second-degree burglary and distribution of a controlled substance.

Parsons is on medical leave. Bean and Cawiezell are on administrative leave pending the results of the investigation. Based on the available evidence, this was a justified shooting.

“There’s nothing about this case that suggests in any way, shape, or form that the actions of these officers out there were not fully justified,” District Attorney Steve Kunzweiler told KOTV. “This is clearly a circumstance in that the officers were faced with a very volatile situation.”