The U.S. Army has released a video showcasing its “third arm” in action. The device—which looks like the M56A2 Smart Gun used by the Colonial Marines in the 1986 film “Aliens”—is designed to evenly distribute the load of a heavy weapon for Soldiers in the field. 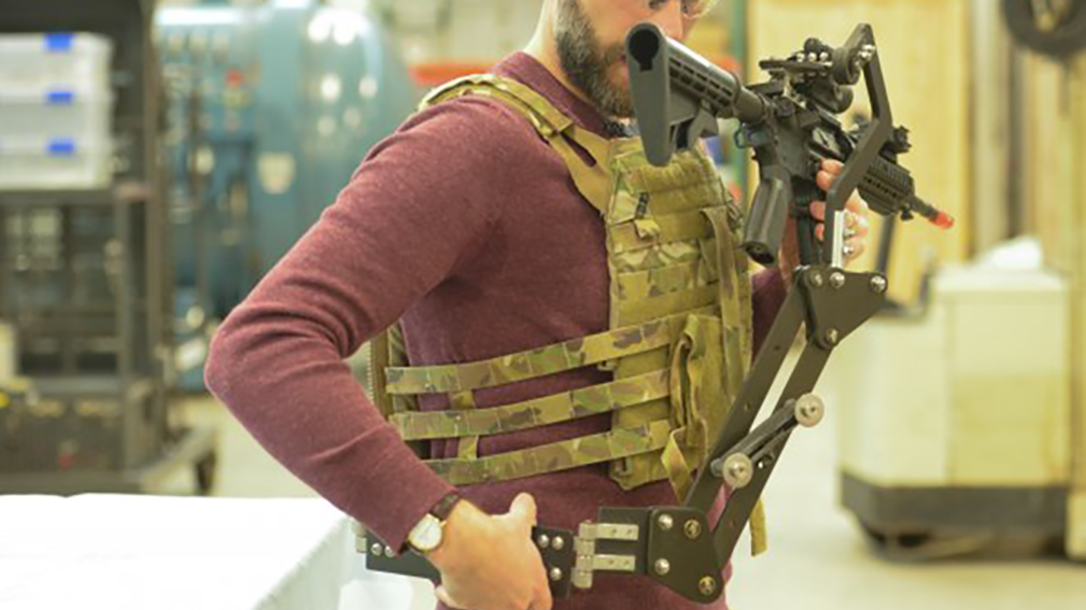 You can check out the U.S. Army Third Arm device undergoing testing at Aberdeen Proving Ground in the video at the bottom of this post.

“It can help stabilize the weapon and take the load off of their arms,” said U.S. Army Research Laboratory engineer Dan Baechle. “It’s made from composite materials to make it as light as possible, but also to ensure the range of motion that Soldiers need.”

The Third Arm weighs in at less than four pounds.

“We’ve actually tested it with the M249 and M240B machines guns. The M240B weighs 27 pounds, and we were able to show that you can take the weight of that weapon completely off of the Soldiers’ arms,” Baechle said.

In the video below, a Soldier at the Military Operations in Urban Terrain site at Aberdeen Proving Ground in Maryland is able to dive into the prone position from a sprint while wielding a carbine attached to the Third Arm. ARL says the device provided the Soldier with “immediate stabilization to improve marksmanship.”

Improvements on the device continue to be made based on Soldier feedback.

Baechle says the Third Arm falls in line with the Army’s current modernization priorities. Because of this, the device has the attention of the service’s top brass.

“It’s been getting a lot of interest higher up in the Army, but also online with some of the stories that have come out. We’re using some of the interest to help motivate further development of the device,” Baechle said.

“What we have right now is a very specific device, but we can learn from that device,” Baechle added. “I hope in the future what we’ll end up with is something that will help the Soldier. Whether or not it’s in the form you see today, that’s less important. Helping the Soldier is what I really hope for. I think this year is really going to be a good one and an important one in showing what this device can do.”