After three rounds of shooting today, Sgt. Vincent Hancock is in first place in men’s skeet as he begins his Olympic title defense at the Royal Artillery Barracks.

The U.S. Army Marksmanship Unit Soldier posted a high score of 74, sandwiching two rounds of 25 around a 24. He holds a two-shot lead over three competitors heading into tomorrow’s final day of qualification.

“Everything felt great today,” Hancock said. “The weather was perfect and I was seeing the targets really well.” 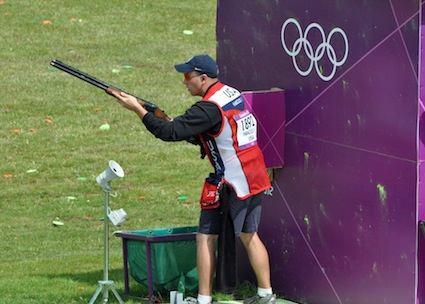 LONDON — Sgt. Vincent Hancock, U.S. Army Marksmanship Unit, fires on a target today at the Royal Artillery Barracks during day one of men’s skeet qualification at the London Olympics. Hancock posted the dayâs high score of 74 and sits on a two-shot lead heading into tomorrow’s final day of competition.

Among those chasing Hancock are Stefan Nilsson of Sweden, Anders Golding of Denmark and Nasser Al-Attiya of Qatar, who all shot a 72. Tore Brovold of Norway, the top-ranked skeet shooter coming into the games and 2008 silver medalist, had a rough day at the range and ended six shots off the lead.

Cheering on Hancock from the packed bleachers were his wife Rebekah and youngest daughter, 5-month-old Brenlyn. Rebekah was also in Beijing to see Hancock win his gold medal and said she feels a little déjà vu being here in London.

“I can’t believe we’re back at the Olympics again,” Rebekah said. “It is amazing. He looks so good out there. He’s been preparing four years for this and is definitely ready to do it again.”

With two rounds of qualification remaining before the final, history awaits Hancock. Since the inception of men’s skeet shooting at the Olympics in 1968, no shooter has ever won two gold medals and only two have medaled twice, none since 1972. Additionally, if he shoots a 48 or better, he will break the Olympic record qualification score of 121 he set in Beijing. 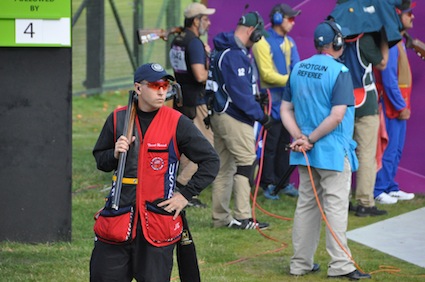