The Vineland Police Department in New Jersey released body cam footage of a fatal officer-involved shooting that took place last Saturday. The footage shows the shirtless suspect pacing, ignoring commands, telling police they’ll have to shoot him and claiming to be holding an explosive device before charging at the officers, getting shot multiple times in the process. 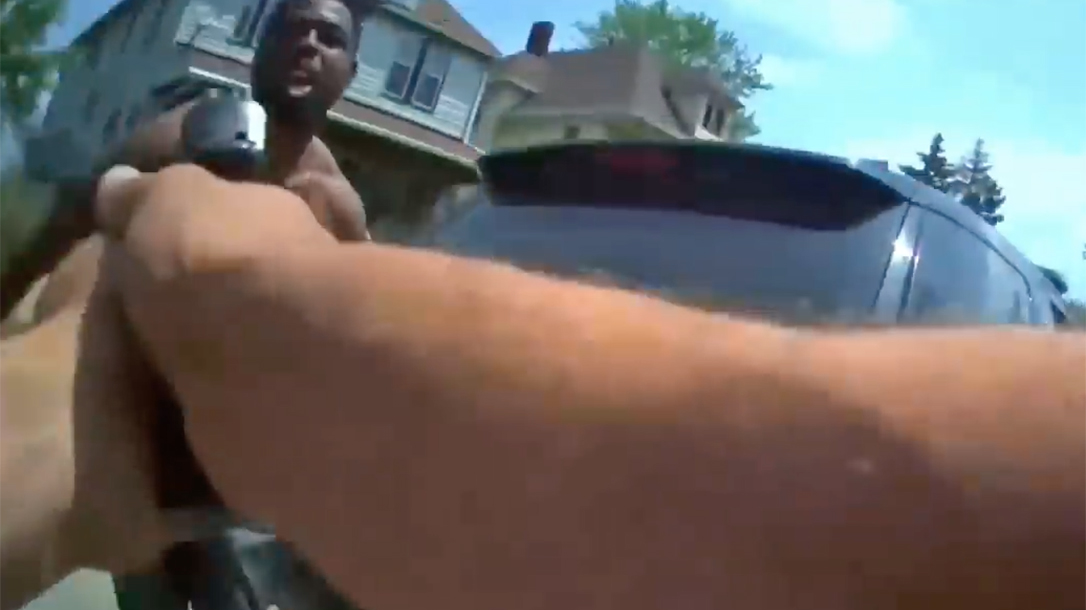 NJ.com says Vineland police responded to a call of a man—37-year-old Rashaun Washington—acting suspiciously while sitting on the front porch of a home. WHYY reports that the home’s occupant asked Washington to leave, but he refused, which prompted a call to authorities.

Police showed up and observed that Washington was holding an item in his hand. They ordered him multiple times to drop the item, but he refused.

“You’re gonna have to kill me,” Washington says in the video.

“I don’t want to,” an officer replies. He then asks Washington what he’s holding in his hand.

“I’m not telling you,” Washington says, adding, “Once I pull the tip off … a couple of us gonna get blown the f**k up.”

When asked why he’s so upset, Washington says, “”They took me in an ambulance. They let me get away. I ran out the hospital. Stole a car. I went and got what I had to get. I let my girl and my kids, everybody else go, and I came here with this,” he said, referring to the item he’s holding in his hand.

According to NJ.com, Washington had recently served time in prison for robbery and was released from a halfway house earlier this year.

In the footage, Washington begins talking about his children, aged 11 and 13.

“You need to be here for them … You’re their father. They need their father,” the officer says. “For them. For them, man. You’re not even in trouble, man.”

At one point, the officer radioes in, “Subject has something in his hand, covered by a shirt. We can’t tell what it is. He says if he takes off the lid, it’ll explode, and it’ll take us all out.”

Eventually, toward the end of this 28-minute confrontation, Washington begins moving closer to the officers. The officers repeatedly tell him to get back.

“Don’t, don’t, don’t,” an officer yells out as Washington runs toward them at the 27 minute and 12 second mark in the video.

An officer discharges his rifle three times, causing Washington to fall to the ground. Another officer sprays Washington with pepper spray as a K9 is deployed to subdue him.

Washington died as a result of his injuries. The item he was holding turned out to be an eight-inch garden shear wrapped in a shirt.

The shooting sparked a march and a protest, even after the body camera footage was released. Protestors held up signs that read, “Don’t Shoot an Unarmed Black Man,” and, “Justice for Pac Man,” a reference to Washington’s nickname.

“They didn’t have to shoot him,” said Washington’s mother, Georgette. “They could have tazed him. Or did anything. He never had no bomb. He didn’t have nothing. And in the broad daylight, they said, they’re gonna have to kill him, and that’s what they wanted to do.”

“There’s all these officers and everybody’s got guns pointed at him. They got high-powered assault rifles. They got a dog barking at him and he’s got nothing in his hand but a water bottle and a T-shirt,” Miller said. “He had to feel threatened with everybody pointing everything at him.”

But Cumberland County Prosecutor Jennifer Webb-McRae had a different take.

“De-escalation techniques were used by the officers throughout the encounter,” Webb-McRae said in a statement.

The officer who pulled the trigger is on administrative leave pending the results of the investigation.