3
SHARES
10
VIEWS
Share on FacebookShare on Twitter
SRM’s 1216 combat shotgun has a semi-bullpup design to keep its overall length down. Its semi-auto action is fed with a rotating four-tube magazine, which offers 16 shells of firepower with a simple twist. Ken MacSwan Photo

If you asked me to list the characteristics of the perfect combat shotgun, they would include semi-automatic operation so that I did not have to work a slide action, compact overall length so it could be used from within a vehicle or in a confined space, fast-handling and fast operating to allow multiple shots on a target quickly, usable sights, and high magazine capacity without a protruding box magazine or overly long magazine tube. By enumerating those characteristics, you’ve just read the full description of the SRM 1216 combat shotgun. 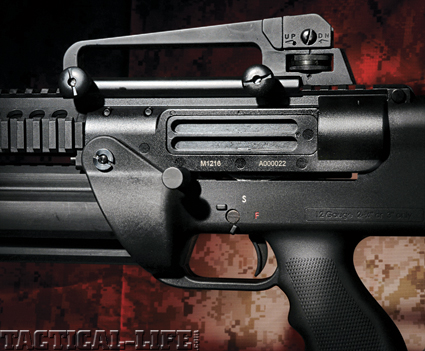 One sight option for the SRM 1216 is an AR-15/M16-type carry handle rear sight, which you can move along the top rail.

Perfect Design
When the test SRM 1216 arrived from SRM Arms, I thought it was interesting. But after some range time the word interesting was upgraded to outstanding! It’s hit the range with me three times, and each time I shoot the SRM 1216 I am more impressed. Everyone else who has handled it—including friends in the military and tactical law enforcement—has also given the weapon very high marks. 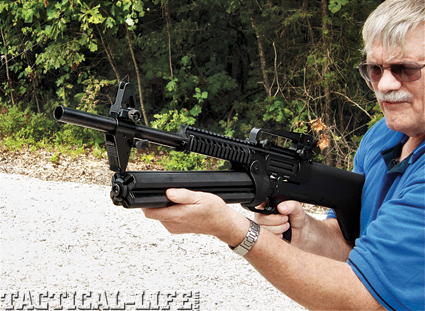 Align the mag properly when reloading. This becomes second nature with practice.

A bullpup design, the SRM 1216 is only 32.5 inches in overall length yet has a civilian-legal 18-inch barrel. Despite its compactness, its detachable, rotary, high-capacity magazine allows it to carry 16 rounds of 12-gauge 2¾- or 3-inch shotgun ammunition. Its action is roller-delayed blowback, which allows for very fast cycling—think Benelli fighting shotgun speed of cycling. An integrated Mil-Std-1913 Picatinny rail allows use of an M16-type carry handle or various sights, while side rails allow the mounting of illuminators. 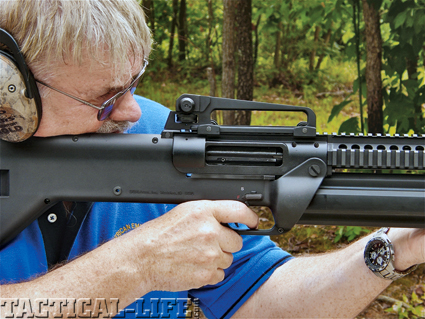 With mild recoil and a short overall length, the 1216 is easy to position and engage.