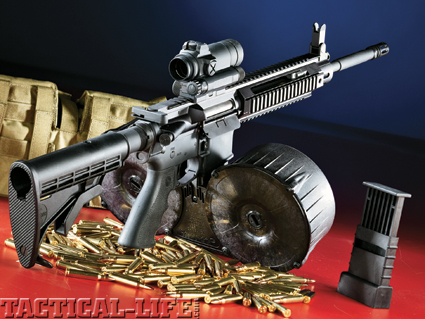 Armatac SAW-MAGs work just like traditional 30-round magazines but they eliminate the
need for special linked ammo. Steve Woods photo.

“I fail to see the logic in the M249. As a general purpose LMG, it has merit. However, when used as an AR, it is a liability to the squad.” — CWO Ray Grundy, USMC

The Marine Corps Gazette has published a number of articles concerning issues with the M249 when used as an automatic weapon. Many within the USMC want it removed from that role. Named the “Minimi” (short for Mini Mitrailleuse, or “mini machine gun”) by manufacturer Fabrique Nationale, it was designed as a light weapon capable of fulfilling the sustained-fire needs of a machine gun. However, it was quickly pressed into service as an automatic rifle, typically dubbed a “SAW” (Squad Automatic Weapon).

While preferable to the M60 previously used in that same role, it was not an optimum choice. The Soviets once fielded a belt-fed weapon for squad use in their 7.62x39mm-chambered RPD, but soon replaced it with the magazine-fed RPK. The RPK is essentially a modified AKM with a heavier barrel and bipod, issued with a larger capacity box magazine, though it can use any Kalashnikov magazine. The Soviets realized that the additional hassle and weight of linked ammunition, coupled with the loss of convenient ammo compatibility within the squad, far outweighed any volume-of-fire advantages.

The reasons for this decision, to cast a belt-fed in the squad automatic role, most likely lie in the novice mistake of confusing volume of fire with firepower. The U.S. Army Combat Developments Experimentation Command conducted a study on effective suppressive fire, which they define as “the temporary degradation in the quality of performance of an individual due to the avoidance of a perceived threat.” The study proved that the effectiveness of suppressive fire was in proportion to how close the bullets impacted—not the amount fired. 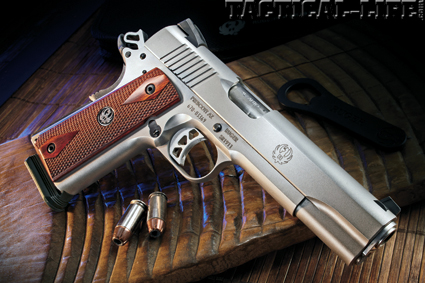