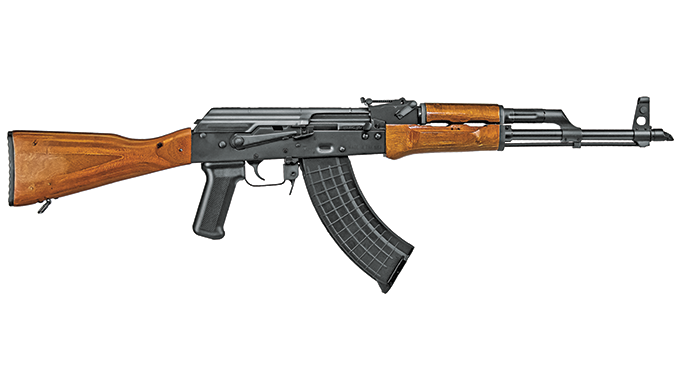 1 of 8
Gun Review: The Inter Ordnance AKM 247-C
The 7.62x39mm AKM 247-C from Inter Ordnance is a close copy of the original Soviet AKM and it has several improvements that enhance its handling, including a lightweight stamped receiver, a recoil buffer and a redesigned buttplate for solid retention. 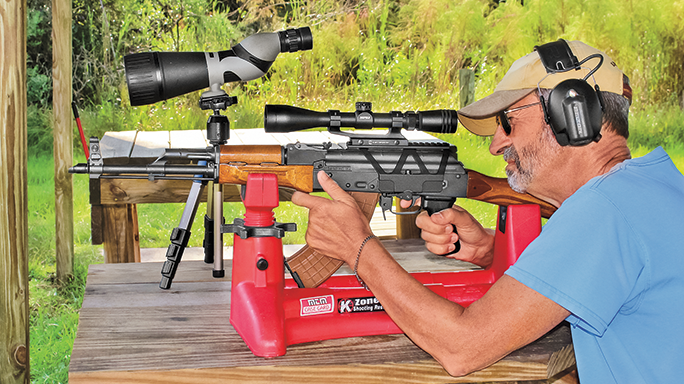 2 of 8
Gun Review: The Inter Ordnance AKM 247-C
The AKM 247-C produced tight groups at the range when used with its preferred ammunition. 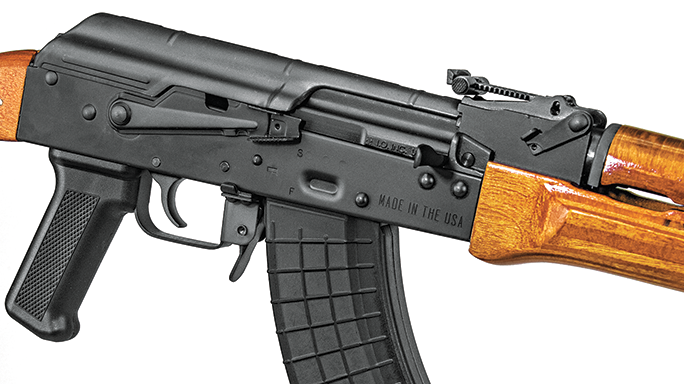 3 of 8
Gun Review: The Inter Ordnance AKM 247-C
The rifle’s stamped-steel receiver makes it about a pound lighter than earlier AK versions that had milled receivers. 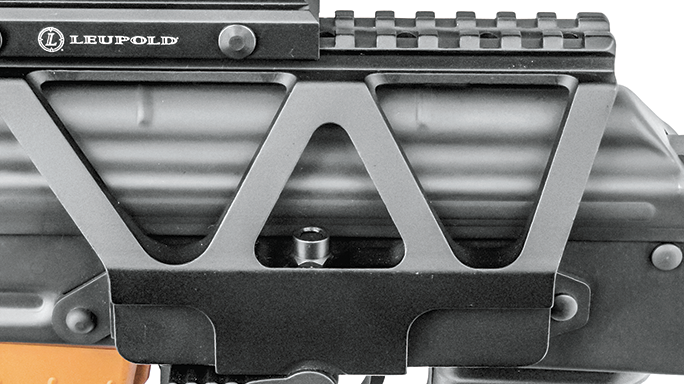 4 of 8
Gun Review: The Inter Ordnance AKM 247-C
IO’s scope mount fit snugly on the built-in mount. The mount is available for about $100. 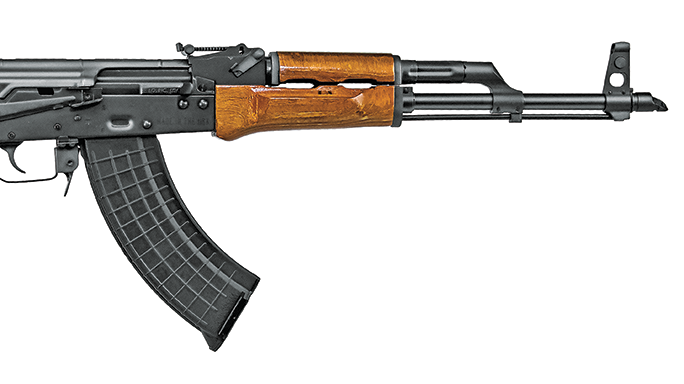 5 of 8
Gun Review: The Inter Ordnance AKM 247-C
The 247-C comes with two polymer waffle-pattern magazines that are designed for optimum reliability in harsh conditions. 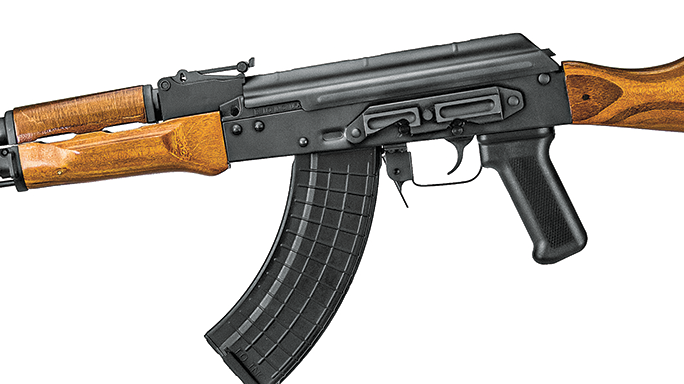 6 of 8
Gun Review: The Inter Ordnance AKM 247-C
The rifle’s stamped-steel receiver makes it about a pound lighter than earlier AK versions that had milled receivers. 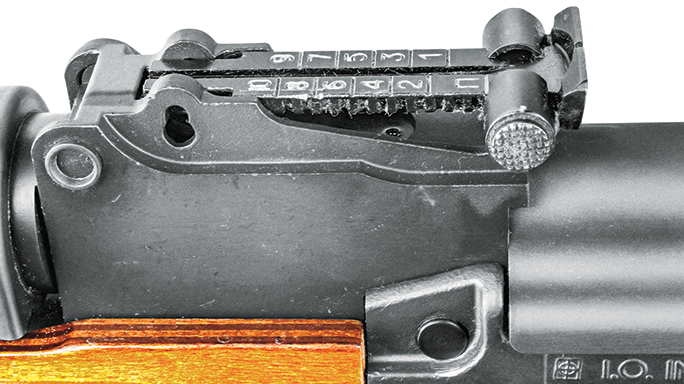 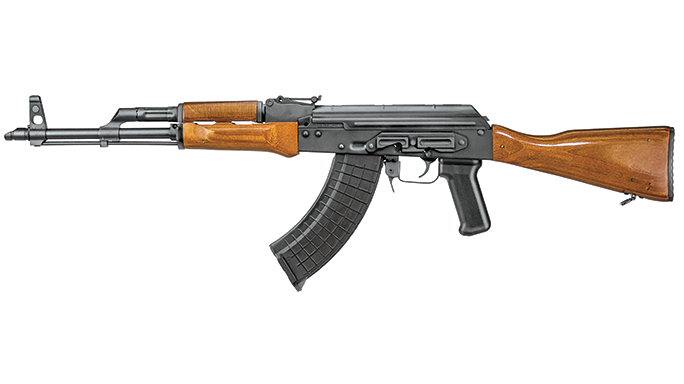 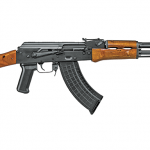 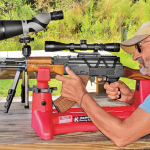 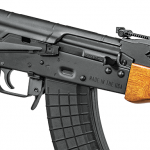 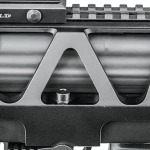 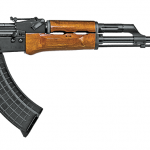 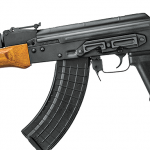 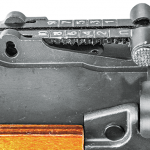 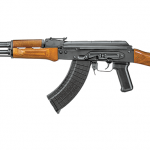 The Inter Ordnance AKM 247-C is an American-made classic AKM that’s bound to attract attention on our side of the Atlantic.

The Soviet-designed AKM is famous the world over for its low price, high reliability and the effectiveness of its “short .30” 7.62x39mm cartridge. And despite the fact that Americans love the AR, AKMs are also popular here in the U.S. However, trade between the United States and the Russian Federation is not a sure thing in our turbulent world, so buying an AKM that’s made in America from American-produced parts has a lot going for it.

Inter Ordnance (IO) began operations in the United States in Monroe, North Carolina, in 1995. The company began by importing surplus firearms parts. Later, it built AKMs from parts kits. However, production issues in North Carolina and the existence of multiple standards for building the AKM in the Eastern Bloc and China led to the production of guns that could be difficult to assemble and sometimes had inconsistent performance. In 2013, IO’s owner, Uli Wiegand, moved the company to Palm Bay, Florida, where layoffs in the aerospace industry had created a large pool of highly skilled workers. Over the last two years, IO has been expanding its manufacturing facilities and is now producing a series of AKM-variant rifles and other firearms as well.

One of those rifles is the AKM 247-C (Classic). It’s specifically designed for the buyer who wants a reasonably priced AKM that looks and handles like the rifle adopted by the former Soviet Union in 1959. IO’s rifle is based on Polish blueprints provided by Michael Michalczuk, the president of Pioneer Arms in Radom, Poland. This set of blueprints is very similar to the original Russian design, which is built around a stamped, heat-treated receiver rather than the milled receiver of earlier AK-47 rifles. The use of a heat-treated, stamped receiver takes over a pound off the rifle’s weight, which keeps the Classic down to 7 pounds unloaded. The Classic also has other AKM-series features, like a laminated wood stock, pinned barrel, U-shaped recoil spring guide, slanted muzzle brake, bayonet mount and a synthetic grip.

The AKM 247-C also has a recoil buffer. The buffer is important because the rifle’s gas port is drilled on the larger side of AKM specifications, to ensure that enough gas is bled off into the gas cylinder to make the rifle run with just about any 7.62x39mm ammunition. It also helps the rifle run reliably when the action is extremely dirty. The buffer cushions the heat-treated bolt carrier as it moves rearward when the action cycles. This helps prevent wear on the carrier and the rear of the receiver.

Another difference can be found in the configuration of the metal buttplate. The buttplate on the AKM 247-C is ribbed to provide a bit more purchase on the shooter’s shoulder. Another major difference between the 247-C and other AKM rifles is that the IO rifle has a proprietary target trigger. The final differences include an extended magazine-release lever and the manually operated bolt hold-open. IO cuts a notch in the safety lever that fits the operating handle when the bolt is manually retracted all the way to the rear. Simply raising the safety lever to its highest position while holding the bolt back captures the bolt handle.

Given that IO AKMs are made from parts built to one specific set of blueprints instead of blueprints used by several nations, it is much easier for

the company to assemble them with consistent quality. I’ve been to the IO factory twice in the past two years, and I’ve observed parts being made to exacting tolerances on computer-controlled milling machines and have seen how the parts are checked for quality and placed in precisely made fixtures for assembly.

The use of fixtures in manufacturing is a method of product assembly that increases quality control while making it easier and faster to build a gun. At first that sounds like a contradiction in terms, but the key lies in the precisely built fixtures. If a part doesn’t fit in the fixture, you can’t assemble the rifle. Therefore, assembling a gun in a fixture assures that it will be within specifications. Fixtures are expensive and time-consuming to make, but they pay for themselves in short order because they speed assembly time and also lead to fewer buyer complaints and returns for repair.

The Classic was field-stripped for cleaning and inspection prior to shooting. This is very important since IO ships the rifle with a protective film in the bore. Therefore, firing the gun without first cleaning the bore could cause excessive pressures. So, I ran a wet patch through the bore, followed by a couple of passes with a brass bristle brush. I used another wet patch and several dry patches and then checked the bore with a bore light. It was clean, shiny and ready to shoot.

I then checked internal and external parts for tool marks, rough surfaces, sharp edges, poorly applied finishes, loose screws, etc. I found none. The finish was evenly applied to both the stock and the metal parts, which were done in dark gray Parkerizing. Wood inletting was good and there was a small amount of play between the upper and lower portions of the handguard, which did not affect the rifle’s functioning in any way. The safety functioned positively. The trigger’s pull was very smooth with some overtravel and measured 2.5 pounds on an RCBS trigger-pull gauge. This is quite light for a tactical rifle. Finally, the rifle was provided with two polymer magazines. They fit tightly, but both inserted and released smoothly after they wore in. Overall, the rifle was well made.

The Classic comes equipped with a tangent rear sight that has the battle zero setting and elevation zero settings in 100-meter increments out to 1,000 meters. The rear sight was adjusted easily and held its zero during firing. The front sight is adjustable for windage. When ordering the rifle, I requested the optional cantilever Picatinny rail mount, which is specifically designed to mount over the chamber directly in line with the bore. The cost for this is around $100, which is less than similar mounts from other manufacturers.

I mounted a Redfield Revolution 3-9x40mm TAC-MOA scope to test basic accuracy out to 300 meters. This scope’s tall, target-style turrets adjust windage and elevation 0.25 inches with each click. This scope also has Redfield’s TAC-MOA reticle, which has elevation and windage crosshairs at 2-MOA increments. In addition, the scope’s lenses have vapor-deposited lens coatings to increase light transmission. The scope was mounted on the cantilever rail using a Leupold one-piece mount. The scope, mount and cantilever locked up tightly and made a very solid platform for accuracy tests.

The rifle was tested for accuracy at 100 yards at the Flagler Gun Club and 200 yards and 300 meters at the Volusia County Gun & Hunt Club range. An MTM K-Zone rest was used to rest the rifle and hits were monitored with a Leupold Kenai spotting scope. Five different loads from CorBon, Hornady, Tula, Wolf and Winchester were used to test the rifle at 100 yards. Bullets ranged from 120 to 125 grains in weight and included hollow-point, polymer-tipped and FMJ designs.

The best five-shot, 100-yard group measured 1.75 inches and was fired with the Hornady load, which uses a 123-grain, polymer-tipped Hornady SST bullet. The Winchester 120-grain PDX1 was the least accurate in this rifle. Its best five-shot group at 100 yards measured 4.13 inches. Overall average accuracy of the best groups for each load was 2.9 inches.

Overall, the AKM 247 Classic proved to be a well-made and reliable firearm, and its MSRP of $655 delivers a lot of gun for the money. 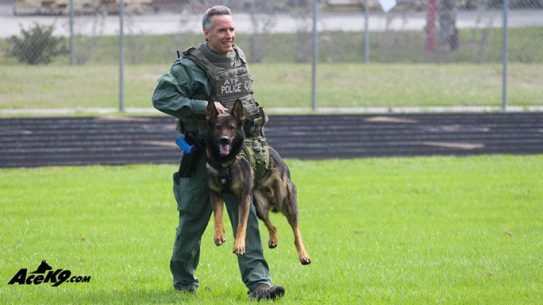