by Kevin Davis
in Guns, Shotguns
0

They were there, you had to look for them oftentimes but 12 gauge self-defense and tactical shotguns and the smiths that specialize in working on them were still a viable presence at this year’s SHOT Show.  Matter-of-fact, some firearms companies that heretofore had not offered anything other than hunting scatterguns were offering 12 gauge pumps and modern takes on age old designs.  If you are still a scattergun fan or appreciate the ballistic effectiveness of nine 00 .33 caliber buckshot rounds on target, fear not, the following list provides possible purchases for you in this category this year. 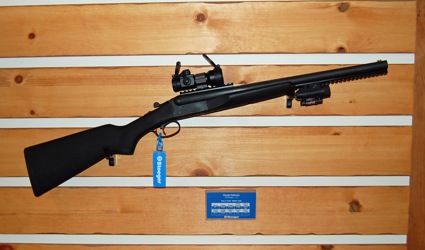 Stoeger® Double Defense™: I’ve always liked double barrel coach guns.  Maybe because they remind me of a bygone era in law enforcement, who knows?  Although many firearms have been upgraded and modernized in recent years, the double barrel 12 gauge has not, that is until recently.  Stoeger has released the Double Defense shotgun which adds the ability to affix modern red dot sights and white lights to picatinny rail systems that are mounted above and below the twin tubes.  I’ve shot the Double Defense and I like it…a lot. stoegerindustries.com 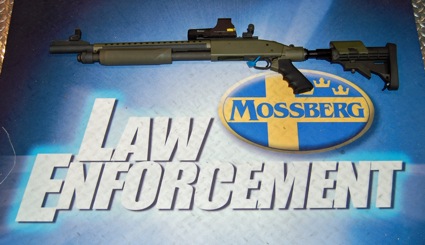 Mossberg Custom Shotgun: Aimpro Tactical which is the official Mossberg Law Enforcement and Service Center Custom Shop has developed a tactical shotgun with a lot of neat features.  The shotgun is set-up for a red-dot sight on the integral top mounted rail system.  The design allows a co-witnessing with the custom built back-up iron sights.  Additional work includes custom work on the barrel forcing cone, trigger, a Mesa Tactical adjustable butt stock, heat shield and Hogue® rubberized forearm.  Really a neat looking and what promises to be a neat shooting design. mossberg.com

Remington Model 887 Nitro Mag Tactical: Remington showed off their new Model 887 Tactical pump action 12 gauge.  This model sports an 18 ½ inch barrel and features a 2-shot mag extension.  The new design has a rail system on top the receiver for mounting red-dot sights as well as a side mounted small rail so you can affix a white light.  The Model 887 features Remington’s Armorlokt™ coating which is a polymer finish that is impenetrable to moisture and will never rust according to company literature. remington.com 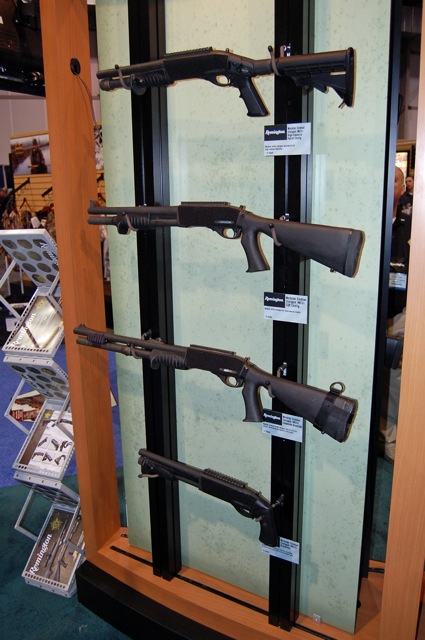 Remington Model 870 Modular Combat System (MCS): Also from Remington in their Law Enforcement line is the Model 870 Modular Combat System (MCS™) shotgun.  The system provides the tactical operator the ability to field different configurations based on the mission.  From an 18 inch barrel to a pistol gripped ten inch barrel breaching shotgun, the MCS system can, according to Remington, be modified quickly without tools based on the REM™LOC Quick Change Stock System. remington.com 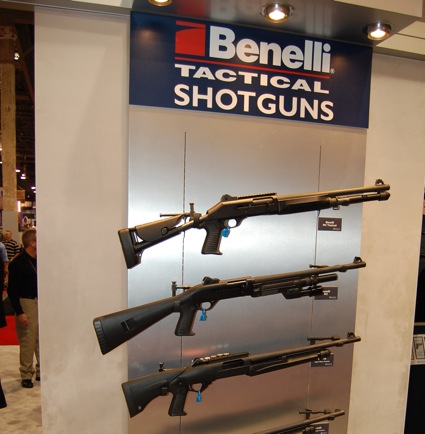 BenelliUSA M4 Shotgun: Chosen and used by the United States Marine Corps the M4 from Benelli sports a fixed or adjustable butt stock, rail system on top of the receiver for reflex or holographic sights, ghost ring iron sights and has proven itself in use by the Marine Corps.  Available in a black finish as well as desert camouflage the dual piston self-cleaning operating system has proven itself reliable in hard use in the world’s hot-spots. benelliusa.com 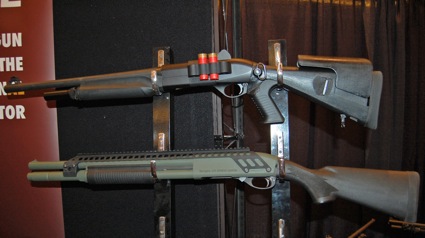 Mesa Tactical Urbino™ Tactical Stock: According to Mesa Tactical, the standard stock length of the Benelli and Remington shotguns by members of the U.S. Military and police tactical teams has lead to an angular stance that unnecessarily exposes their less armored sides of the torso.  Mesa has developed the Urbino which has a 12 ½ inch length of pull stock to “square away” the soldier or police in their shooting stance.  Additionally, the Urbino will be available with a cheek riser to enable the use of red-dot sights.  The Urbino will begin shipping sometime after April 2010 according to Mesa’s Mitch Barrie. mesatactical.com 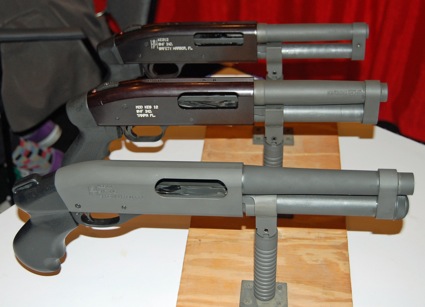 Safety Harbor Firearms KEG12: Small blaster is what comes to mind when holding a KEG12 from Safety Harbor.  Whether in a 7 ¼ “ or a ten inch barrel the little 12 gauge can deliver three or four buckshot rounds from a small discreet package.  Sporting a folding front vertical forearm the KEG12 could work as a small breaching shotgun or with 00 buck deliver awesome firepower from a concealed shotgun. safetyharborfirearms.com 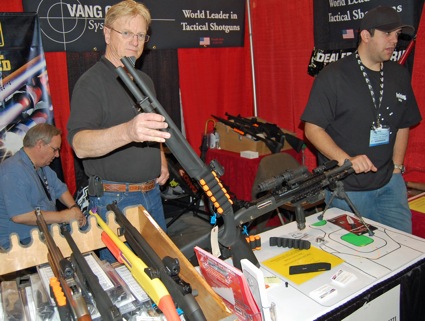 Vang Comp Systems: The gang from Vang Comp had their superb shotguns on display.  Vang Comp does more than simply port a 12 gauge.  With contracts from the D.E.A. as well as other serious shotgun shooters, Vang Comp can take an ugly duckling of a shotgun and turn it into a beautiful swan (one that fires multiple rounds of serious 12 gauge buckshot).  I own a Vang Comp System’s shotgun that was once an old sheriff’s office Remington 870, like I said, it went from ugly to a real stunner both literally as well as figuratively.  Hans Vang and the smiths that work with him are top notch and really nice folks, check them out. vangcomp.com

Sarsilmaz® M204ATP (All Tactical Purpose): Sarsilmaz is a Turkish gun company that had a variety of tactical shotgun’s specifically designed for law enforcement.  The M204ATP is a 12 gauge scattergun that features: an extended seven round magazine; Folding metal stock; and magazine mounted light system.  I’ve never shot a Sarsilmaz shotgun but I’ve shot other firearms made in the country that were well made shooters.  Sarsilmaz has been around since 1880 so we can assume they know what they’re doing. sarsilmaz.com

Beretta Tx4 Storm: New from Beretta for 2010 is the TX4 Storm 12 gauge gas operated shotgun.  The TX4 has a mag capacity of five 2 ¾” shells and an 18 inch barrel.  With a picatinny rail atop its receiver for the use of red-dot sights, the TX4 also comes from the factory with ghost ring sights.  Of particular interest is the composite stock and forearm which has integral soft rubber gripping services.  The length of pull with the TX4 is adjustable with 1/2” spacers (comes with one spacer).  The TX4 comes with Beretta’s Optima Bore HP choke tube system and is available with an optional muzzle comp. berettausa.com 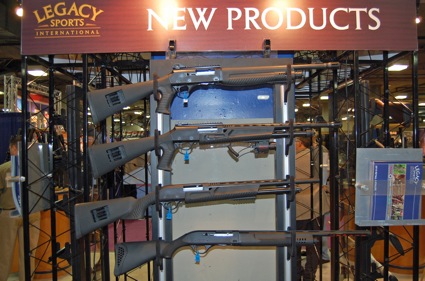 Hatsan Arms Company Escort Shotguns: Legacy Sports International has, according to company literature, several partners in manufacturing several different firearms.  The Escort line of shotguns is manufactured by Hatsan Arms Company in Izmir, Turkey.  On display and new for 2010 are the Escort AimGuard shotguns.  Available in semi-Auto or pump, the AimGuard semi features: 18” barrel, picattiny rail, ghost ring sights, two spare shell holders on the right side of the stock and more. legacysports.com 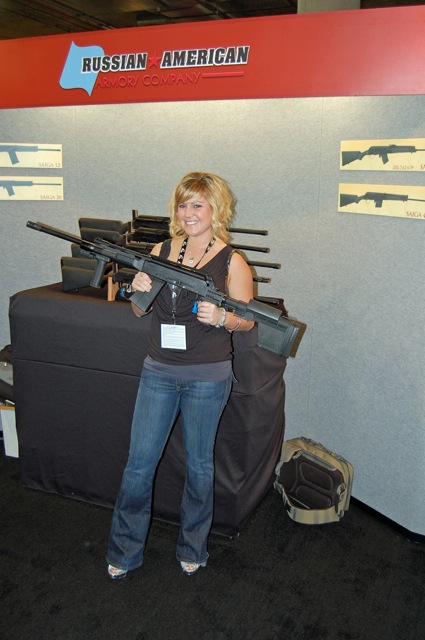 Russian American Armory Company Saiga – 12 Shotgun: The Saiga – 12 Russian shotgun is based on the same reliable Kalashnikov design as the AK47 except in 12 gauge.  The semi-auto shotgun comes with either a 19 or 24 inch barrel and comes from the factory with a two or five round box magazine.  Russian American Armory works with Surefire Gun Mags to provide optional parts and accessories including 8, 10 or 12 round magazines. raacfirearms.com 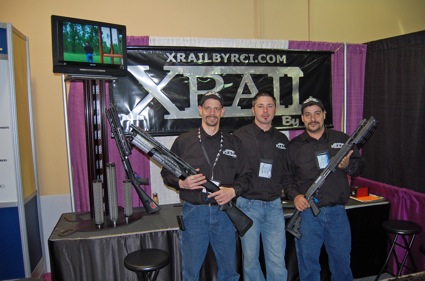 XRAIL by RCI: Imagine the benefit of a 15 or 21 shot shotgun in competition or for corrections personnel firing less-lethal bean bag rounds at rioting inmates.  The ability to fire that many rounds without reloading is what the XRAIL is all about.  This rotating multi-tube magazine affixes to the front of a semi-auto or pump shotgun to provide vastly increased capacity. We’ve fired the XRAIL and found it to perform as advertised. xrailbyrci.com 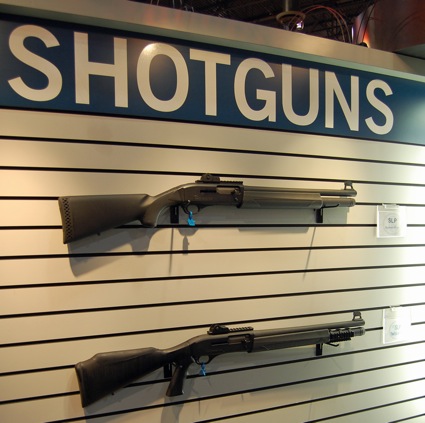 FNH USA SLP Tactical Shotguns: Due out in the fall of this year is the 18” barrel SLP Tactical model from FNH USA.  The new design includes a pistol grip stock with interchangeable cheek risers, picatinny rails on top of the receiver, ghost ring sights.  The SLP Tactical also includes a tri-rail accessory mount forward of the forearm so you can mount lights or lasers. fnhusa.com

R&R Targets, Inc. Custom Saiga – 12 Shotgun: R&R Targets has taken the utilitarian Saiga-12 shotgun and, according to their flyer, turned it into an AR-12.  Not literally but they have modified the bolt handle and placed it on the left side, replaced the lever safety with a traditionally place AR style safety, developed an AR style mag well and mag release as well as improving the sights and developing a sight mount for red-dots.  Available in full race gun configuration for competition, R&R also makes a less modified more street worthy version as well (R&R also makes a “float tube” with stand-off so that their shotgun can be used as a door breaching gun as well).  With 12 or 20 mags (larger for competition) the R&R Saiga-12/AR-12 is an interesting offering. randrtargets.com 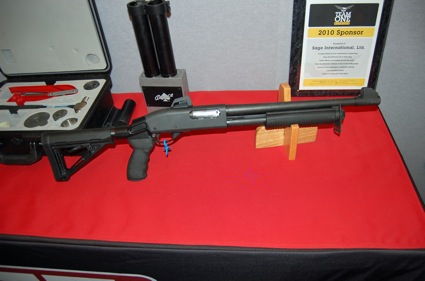 Sage International Ltd. Shotguns: The same people that are well known for their less lethal munitions and launchers also offer custom shotguns and parts.  Sage International had several custom modified shotguns at their booth including both pump and semi-auto.  Sage does ghost ring sight work, telescoping stocks, sling loops and a variety of other custom modifications.  From full-size to cut down breaching shotguns, Sage has got a shotgun for you. sageinternationalltd.com 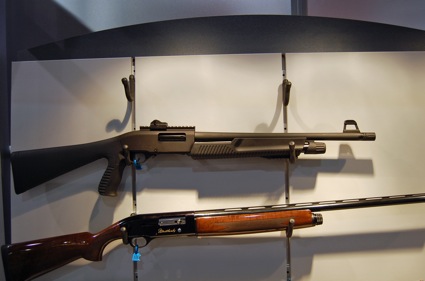 Weatherby, well known for their superior rifles, have gotten into the home defense shotgun market in a big way with their new PA-459 shotgun.  But by the looks of their Home Defense Shotgun, they put as much thought into the design as they do into their rifles.  With an overall length of 40 inches, this 6.5 lb. pump shotgun features a 19” chrome lined barrel, ghost ring sights with receiver top mounted short picatinny rail system for holographic sights, a picatinney rail mounted under the forearm for white lights or laser and a pistol grip stock with low-density recoil pad, the PA-459 looks like a serious social shotgun. weatherby.com 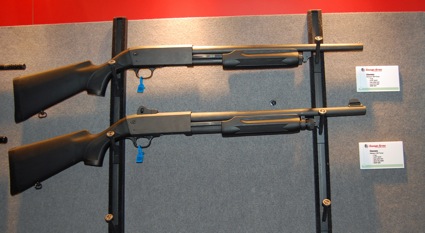 Savage Arms / Stevens 350 Pump Shotgun: Stevens brought out two new 12 gauge self-defense and LE shotgun offerings at this year’s SHOT Show.  The Stevens 350 pump Security model is available in an 18 inch barrel length with a bead front sight or the same barrel length but outfitted with ghost ring sights.  Both versions weigh in at 7.7 lbs. and carry five 2 ¾” or 3” 12 gauge shells in the magazine with one in the chamber for an overall capacity of six shells.  The price point on the Stevens 350’s are excellent at $241 for the bead sighted version and $282 for the ghost sights.  Both versions look like serious shotguns worthy of your consideration.