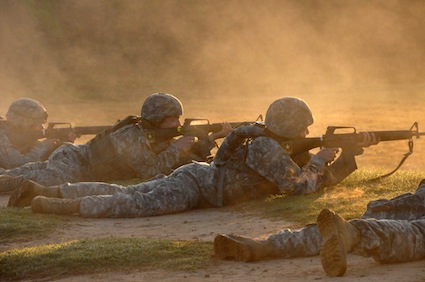 Amongst the fog, smoke and sunrise, Soldiers compete in the rifle Excellence in Competition match March 21. The match was one of a slew of rifle matches conducted during the 2011 U.S. Army Small Arms Championship, the premier marksmanship competition in the military. The 2012 All-Army will be held March 1-10 at Fort Benning.
(Photo by Michael Molinaro, USAMU PAO)

The U.S. Army Marksmanship Unit, in conjunction with the Maneuver Center of Excellence and Fort Benning, will host the 2012 U.S. All-Army Small Arms Championships March 1-10. The “All-Army” competition is open to all Soldiers of any rank in the entire Army formation, including West Point and college ROTC cadets, Army Reservists and National Guardsmen.
There is no cost to compete in the championship and ammunition is provided to all competitors. Those attending will fire hundreds of rounds in the ultimate training event. More than 300 competed in 2011, the highest number of competitors in 18 years, and organizers hope to break that mark in 2012.

“Marksmanship is a critical link in the chain of Soldier skills,” said Maj. Gavin Rice, operations officer, USAMU. “The 2012 U.S. Army Small Arms Championship, or ‘All-Army,’ is an opportunity for Soldiers to train with the best marksmanship instructors in the Army, increase their level of marksmanship proficiency through competition, and raise the Army’s overall combat readiness.”

Soldiers will compete in separate Cadet, Novice, Open and Pro classes based on their competition experience. Soldiers will fire M-16 or M-4 service rifles at distances between 25-500 yards and M-9 pistols between 7-35 yards in a variety of courses of fire. There is also a combined arms match, where competitors employ the rifle, pistol and shotgun in a number of exciting stages of fire. 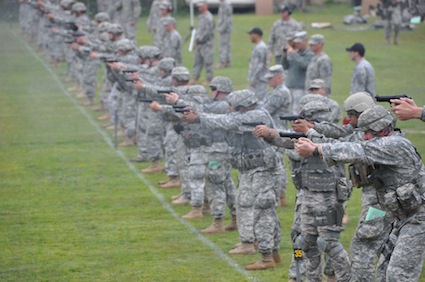 FORT BENNING, Ga. — Hundreds of Soldiers, officers and cadets compete in the 2011 U.S. Army Small Arms Championships. Competitors are put into four classes dependent on their competition experience in the ultimate training event in the military.

There are special categories for high drill sergeant, high novice and high enlisted Soldier, Guard, and Reserve (E1-E4). Cadets enrolled in an Army ROTC program are eligible for scholarship money.

Battalion-level and up teams compete for team awards and unit recognition. All Soldiers will receive marksmanship instruction and training materials from the USAMU to conduct Train-the-Trainer clinics upon return to their home station.

During the pistol and rifle matches there will be an Excellence-in-Competition Match and all Soldiers can earn points toward their EIC Marksmanship Badges, which are the most coveted marksmanship badges that can be earned and worn on a military uniform as described in Army Regulation 600-22 and have precedence above the standard qualification badges. 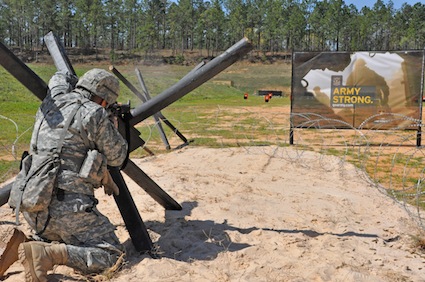 FORT BENNING, Ga. — A Soldier dodges obstacles while shooting his rifle on one of four combined arms courses during the 2011 U.S. Army Small Arms Championships. The 2012 All-Army is scheduled for March 1-10.

“One of our most basic skills required as a Soldier is marksmanship,” said Army Reservist Sgt. 1st Class Russell Moore, last year’s overall individual champion. “Take away our small arms and what are we? The All-Army Small Arms Championships not only provides the training every Soldier needs to excel in marksmanship, it also provides a means in which to test it among their peers.”

For additional information, visit the USAMU website at www.usamu.com.

Amongst the fog, smoke and sunrise, Soldiers compete in the rifle Excellence in Competition…