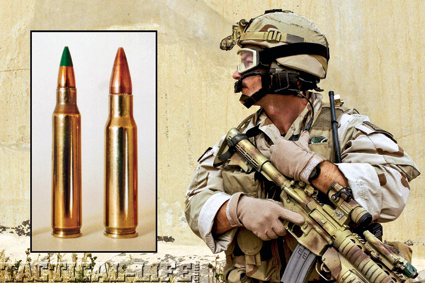 For nearly three decades 5.56mm NATO M855 Ball (inset, left) has been the standard service load for the M16 rifles and M4 carbines carried by most American infantrymen, as well as M249 and Mk46 light machine guns used by conventional and special forces. These weapons can be converted to fire the 6.8mm SPC (inset, right), which delivers superior terminal effects against both soft and hard targets. Courtesy of U.S. Air Force.

In comparison to conventional units, special operations forces (SOF) have traditionally been given much wider latitude in regard to the weaponry they can use. A perhaps inevitable consequence of this fact is that Special Operations Command (SOCOM) is allowed to develop combat weapons and ammunition independently of the Army’s small arms programs.

One of SOCOM’s endeavors was the Special Purpose Rifle (SPR), a heavy-barrel, “accurized” version of the M16. Equipped with a telescopic sight, the SPR has been used in Afghanistan for engagements at distances beyond what is feasible with the standard M4 carbine. Firing Black Hills’ Mk262 competition ammo loaded with a 77-grain, Sierra MatchKing bullet, SOCOM units have reportedly hit Taliban and al-Qaeda targets at ranges in excess of 600 yards. 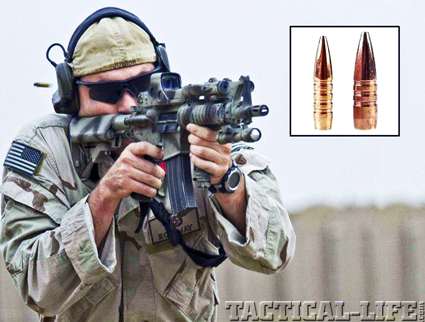 Some SOF veterans of Somalia in 1993, and Afghanistan a decade later, were dissatisfied with the fight-stopping ability of the standard 5.56mm M855 Ball round when fired from the M4 carbine. Better results have been reported by special operations soldiers who have used the Mk262 load in the mountains of Afghanistan. However, even the improved terminal effects of the 77-grain loading did not satisfy some SOCOM personnel, who pushed for the creation of even more lethal ammunition. 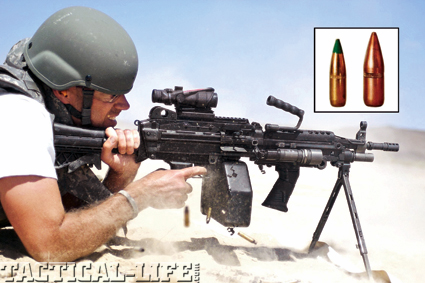 The M249 light machine gun fires the 5.56mm projectile (inset, left), which has proven to have less than stellar tactical penetration against barriers commonly encountered in urban combat. Converting the M249 to fire 6.8mm (inset, right) would significantly improve the ability to defeat “hard” targets. Courtesy of U.S. Army 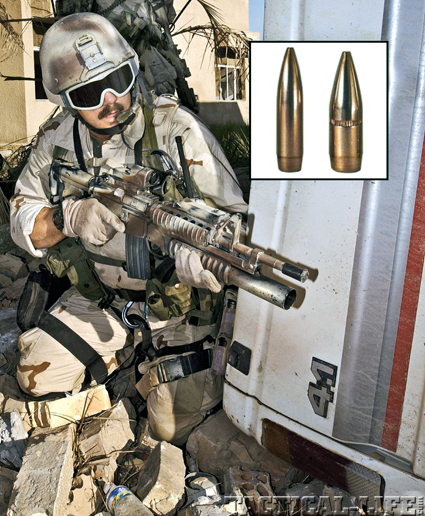 For improved terminal performance of their M4A1 carbines, U.S. special operations personnel have been using 5.56mm Mk262 ammo, which is loaded with a 77-gr. Sierra MatchKing BTHP bullet (inset, left). In a quest to provide even better effectiveness, the 115-grain Hornady BTHP (inset, right) was developed for use in the initial 6.8mm SPC combat load. Courtesy of U.S. Air Force 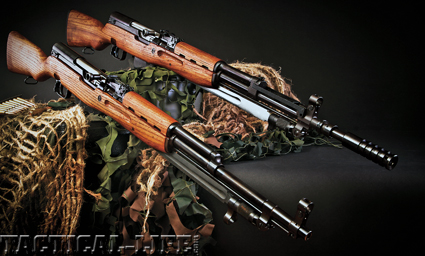