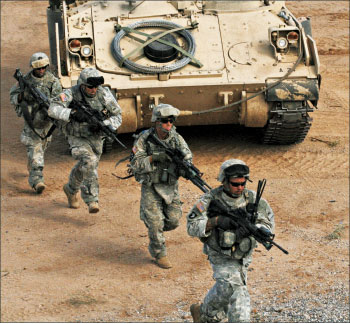 The infantry squad had a pretty good idea of what they were getting into as their two Bradleys roared across the dusty field toward the building complex.

Their first indication had come from the T-UGS (Tactical Unattended Ground Sensor) field that had been established by the battalion’s scout element. Using a concealed combination of T-UGS, ISR (Intelligence Surveillance and Reconnaissance) Nodes, Camera Nodes, and Gateway Node, the scouts had established a wireless early warning field along a suspected hostile approach route.

“We use the T-UGS in a variety of ways,” observed First Lieutenant Andrew Andersen, Scout Platoon Leader. “The first one would be in major combat operations. Basically, if we were in an area of operations that we wanted to attack, we could put a screen line on an avenue of approach, which is basically an area where the enemy could use some roads to move down into our area of operations. That would basically provide early and accurate intelligence—based on the detections we got—on the enemy that is coming through,” he said. 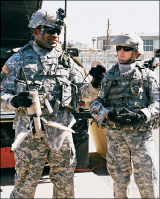 Current system capabilities allow Andersen’s Humvee to be located up to 1.5 kilometers from the critical Gateway Node in the T-UGS field. A Camera Node or ISR Node can then be hidden up to 400 meters from the Gateway Node to start the sensor field. “Then you just start tacking on the rest of these sensors, stringing them along at 400 meters distances, and you can actually get quite far standoff distance,” Andersen explained. “Each of the nodes acts as a ‘hop,’ meaning that the communication from one node to another can hop between sensor nodes back to the vehicle. One of the last places we could use it in major combat operations is basically when an infantry company comes in and takes over a city, maybe they want to protect their flank…we can place T-UGS on the road so that they would have early warning if there’s unauthorized traffic that’s coming into their AO (area of operations).”

It was just that sort of unauthorized traffic that had been picked up and broadcast to elements of the 5th Brigade, 1st Armor Division. The AETF (Army Evaluation Task Force) was established in 2007 at Fort Bliss, TX to evaluate some of the early technologies emerging under the Army’s capstone FCS (Future Combat System) program. Operationally, the AETF currently falls under the FFID (Future Force Integration Directorate), which itself is subordinate to the ARCIC (Army Capabilities Integration Center) at Ft. Monroe.

Based on Combat Vet Experience
AETF members are purposefully picked for the role, with approximately 65 to 70% of the unit composed of combat veterans, with a large number of that group having been deployed twice, either to Operation Iraqi Freedom or Operation Enduring Freedom. That combat experience starts at the top. The testers and evaluators work very closely with the acquisition community because of the need to get these capabilities into the hands of soldiers quickly so that experienced soldiers can provide direct feedback in the development. Some of these new capabilities are emerging from the Army’s FCS transformation program. An early restructuring of that “system of systems” effort led to a concept called “Spinouts,” in which selected packages of available technologies or systems would be examined for possible early spinout to the current force.

The Unmanned Picket Line
The AETF is currently examining a package of systems and technologies bundled together in a capabilities package known as “Spinout 1.” The new systems include the T-UGS, an U-UGS (Urban Unattended Ground Sensor) system, Class I UAV (Unmanned Aerial Vehicle), SUGV (Small Unmanned Ground Vehicle), and NLOS-LS (Non Line of Sight Launch System).

The hardware elements in the “Spinout 1” package now in LUT (Limited User Testing) by the 5th Brigade 1st Armor Division also include a slice of the FCS networked common operating environment.

These sensor systems allow the Army to get early warning to kill the enemy. Within the AETF, the early warning from that T-UGS sensor field was subsequently confirmed by the unit’s Class I UAV. The UAV video confirmed that the enemy first detected by the scout sensors had entered a building on the outskirts of an industrial area. That combined knowledge led to the assault by the infantry squad. Dismounting from their Bradleys, the squad crossed a small open area under the cover of smoke before assuming protected positions behind some rubble and urban obstacles. 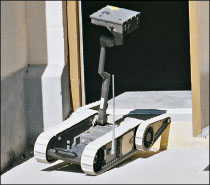 Robotic Recon Missions
One of the infantry squad members in the assault carried what appeared to be a small suitcase. From his protected position he placed the package on the ground and quickly activated the unit’s SUGV (Small Unmanned Ground Vehicle), a 30-pound robot with an elevating visual and infrared sensor package. Monitoring the remote SUGV camera image through a small eyepiece mounted on his current ballistic eye protection, the Robotics NCO used a modified video game controller to quickly maneuver the robot up some steps and into the building.

The building’s hostile occupants, who thought that they were safely hidden in darkened ambush positions under an interior stairway, shone brightly on the SUGV thermal image that was being viewed outside. That critical location information was quickly passed to the squad members preparing to make the forced entry. The enemy probably didn’t realize that the small robot’s infrared light had also been turned on to illuminate their position for the night vision devices worn by the entry team. It was over in seconds. Within minutes of the entry, the squad members were emplacing elements of another “Spinout” hardware component known as the U-UGS.

The intrusion information and pictures from the U-UGS nodes are then sent back to a video screen on the “B-kitted” Bradleys or other current force vehicles. In addition, U-UGS contact information—currently with­­­­­­out video—can also be sent to a handheld Gateway device, carried by the squad leader, which can be used to monitor and control the newly installed U-UGS field.

“They would start putting up the sensors because they are going to keep pushing forward,” observed Captain Justin Tice, the Infantry Company Commander. “And [U-UGS] provides an assistance in early warn­­­­­­­ing if somebody comes in behind them. We can have these sensors here to tell us if somebody else comes in. Again, it does not replace rear security. But it does assist and augment.” 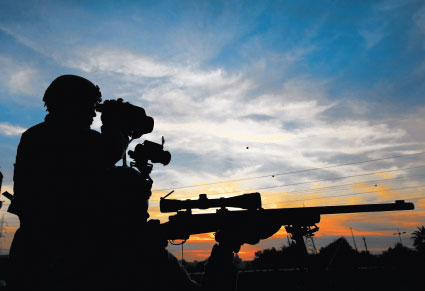