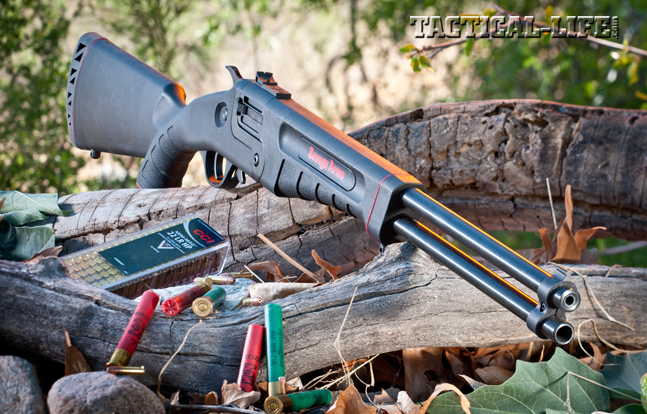 1 of 11
410 Savage Hybrid | Gun Review 1
Savage Arms’ new lightweight Model 42 over/under is easy to carry and provides a quick follow-up solution for harvesting small game. The top barrel is chambered for .22 LR ammo while the bottom is ready for .410 shotshells. 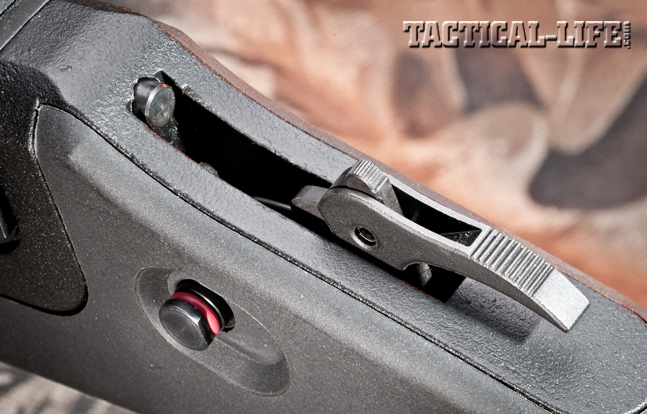 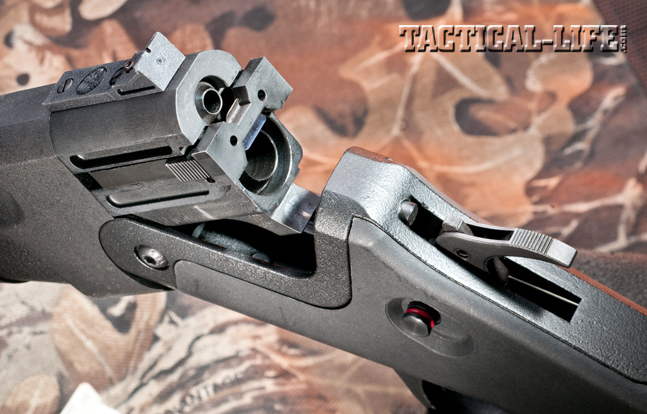 3 of 11
410 Savage Hybrid | Gun Review 3
You can load the Model 42’s chambers individually with the hammer in its at-rest position. For extraction, manually pull the extractor bar to the rear. 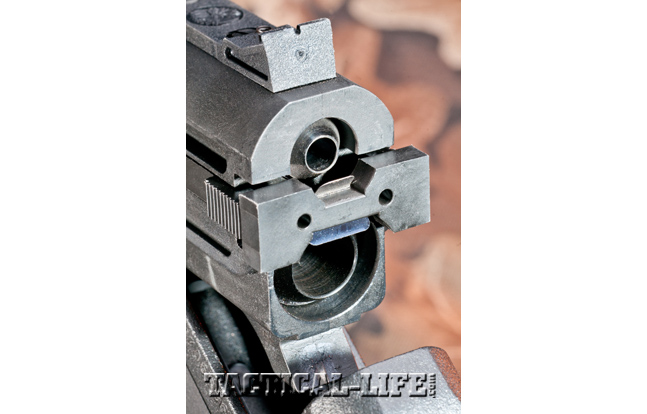 4 of 11
410 Savage Hybrid | Gun Review 4
You can load the Model 42’s chambers individually with the hammer in its at-rest position. For extraction, manually pull the extractor bar to the rear. 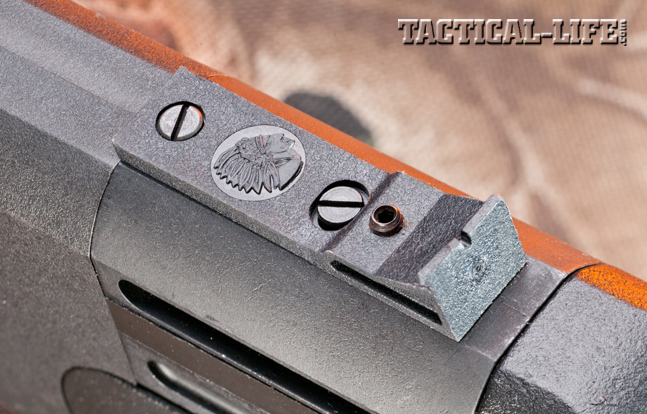 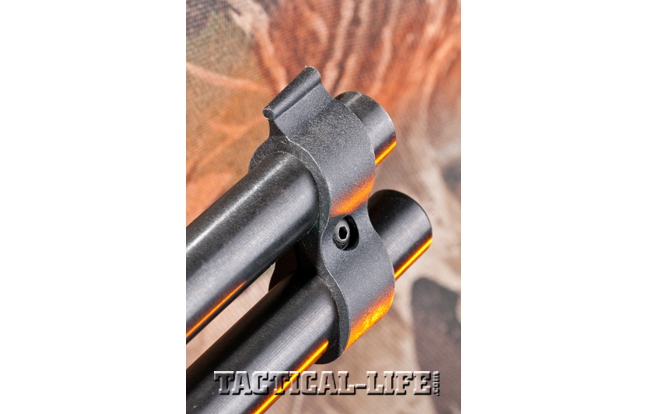 6 of 11
410 Savage Hybrid | Gun Review 6
Savage Arms equips the Model 42 with polymer sights, including a front blade that is integral with the barrel band. 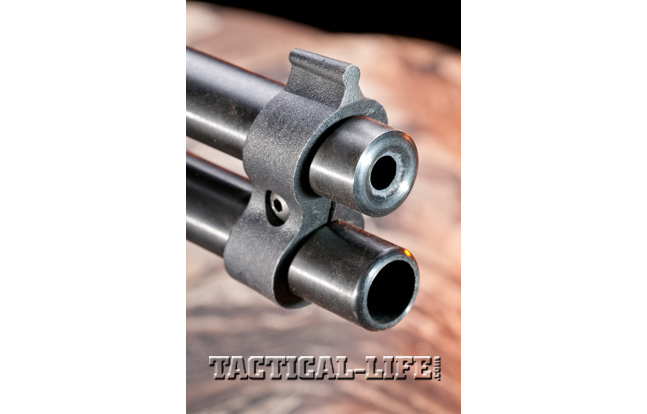 7 of 11
410 Savage Hybrid | Gun Review 7
Savage Arms equips the Model 42 with polymer sights, including a front blade that is integral with the barrel band. 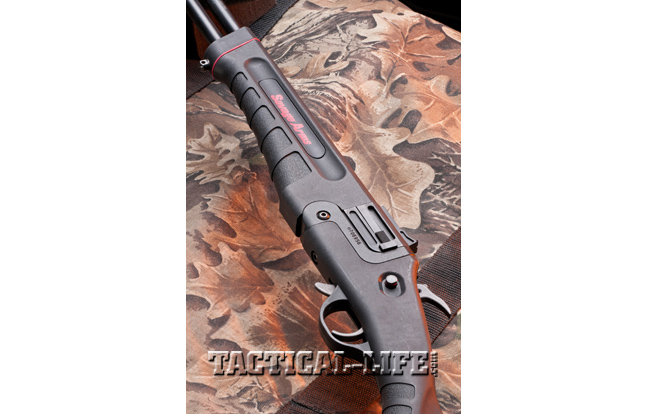 8 of 11
410 Savage Hybrid | Gun Review 8
A side view of the over/under shows the barrel latch in front of the trigger that opens the action, the sliding extractor bar and the large crossbolt safety. 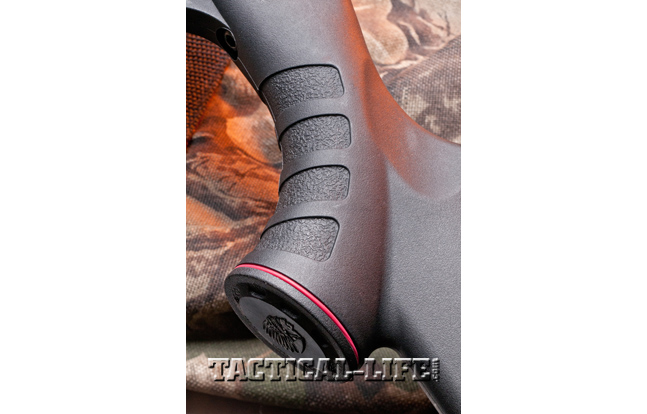 9 of 11
410 Savage Hybrid | Gun Review 9
Textured finger grooves in the pistol grip and forend offer greater control, even in slippery conditions. Note the Savage logo in the butt of the grip. 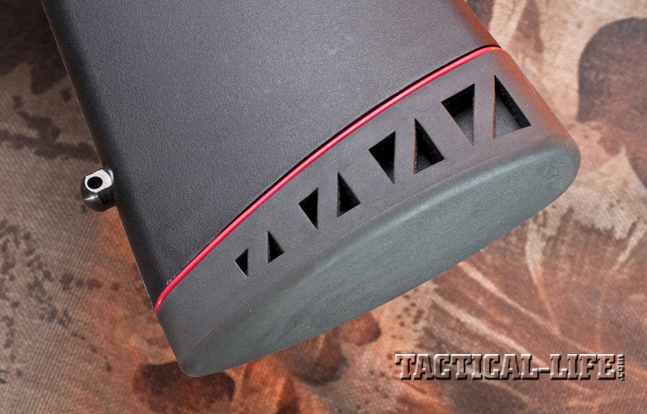 10 of 11
410 Savage Hybrid | Gun Review 10
Savage Arms’ new lightweight Model 42 over/under is easy to carry and provides a quick follow-up solution for harvesting small game. The top barrel is chambered for .22 LR ammo while the bottom is ready for .410 shotshells. 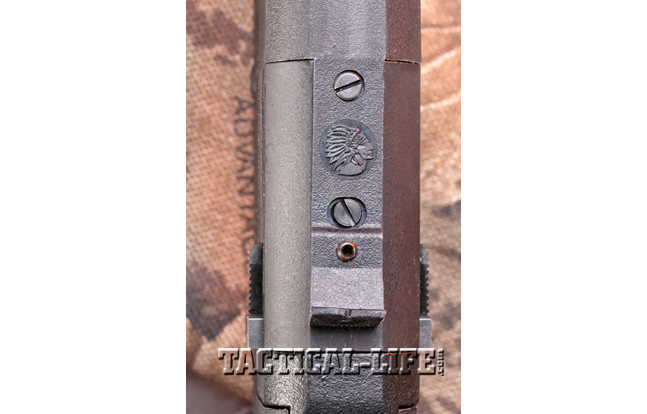 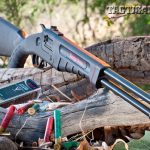 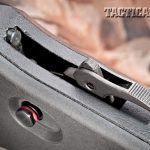 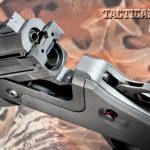 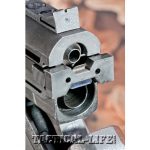 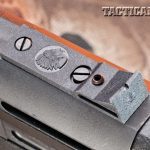 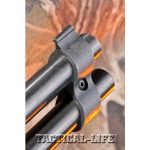 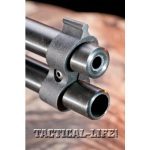 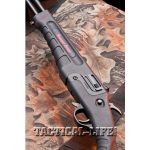 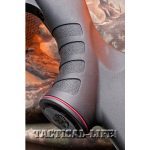 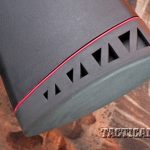 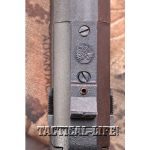 Combo guns, as a generic term, usually refer to shoulder-fired guns that feature a combination of two or more barrels that fire a shot charge through one and a bullet through the other. The concept is an old one, originating in Europe, where the wealthy classes could afford the extra costs of a two-barreled gun that doubled its hunting utility by allowing it to chase either a stag or a bird on the same hunt as the opportunities presented themselves. Landed gentry, without the restrictions imposed by the modern day hunting seasons we deal with today, could and did hunt anything they wanted to—any time they wanted to, on their own extensive estates.

The combination of a shotgun barrel with a rifle barrel on the same stock obviously added weight over a single-barreled version of either type, and the evolution of the three-barrel drillings even more so, but when game was plentiful and money no object, the advantage of a single well-crafted gun that could bag anything on its owner’s lands appealed to many well-heeled sportsmen. Eventually, the idea caught on here in the U.S., and although the combo gun has never reached the same popularity levels as the dedicated single-purpose rifle or shotgun, there’s been enough market for Savage Arms to keep various generations of the company’s over/unders (O/Us) going for many years.

Tracing its roots back to the Model 24 in 1939, the Savage combo gun has been gone from the lineup for a while, but in late 2012 Savage brought the concept back in the form of the new Model 42, a lightweight adaptation with 20-inch barrels and black synthetic furniture that should draw interest among those who like a trim long gun for small-game uses in either a camp or trail gun role. Chambered in .22 Long Rifle on top over a 3-inch .410 chamber on the bottom, the Model 42 weighs in at 6.1 pounds empty, which is a welcome weight reduction over its previous wood-stocked ancestors for extended carry in hand on a long hunt or attached to a backpack during a prolonged trek on foot.

Like its ancestors, the Savage Model 42 retains the very simple basic action that’s easy for anybody to learn and use effectively. A hinged-type action that breaks open, to select a barrel, you flip a toggle “switch” in the face of the hammer up or down to strike either the higher or lower firing pin, and the gun uses a lever underneath the forend, just forward of the triggerguard, to unlock and open for both loading and extraction. Pull back on that lever with your trigger finger to unlock the action, and the forward barrel section swings down to expose the chamber mouths. Load the chambers, and the barrels swing back up to their locked firing position. After firing, repeat the process to extract the empties and/or reload. The design is built to allow this process to be totally independent of the external hammer; unlike a lever-action or a bolt-action rifle, or a pump or semi-auto shotgun, opening the action doesn’t re-cock the gun. You have to manually cock the hammer each time for firing, regardless of what you do with the hinged action, and Savage has included an additional safety feature in the Model 42 to resist any unintentional discharges as a result of mishandling. The gun is set up so that it’s impossible to open or close it with the hammer cocked. Aside from that, the Model 42’s rebounding hammer rides slightly rearward at rest, off the spring-loaded inertial firing pins mounted in a steel breech insert in the lower frame, and the hammer can’t move forward to contact the pins unless the trigger’s deliberately pulled, as a drop-safe precaution.

Another added layer of safety is the manual crossbolt safety positioned in the stock, where it further blocks the hammer from falling on a firing pin if the trigger’s pulled when on “safe.” This is one of those guns where obviously a lot of thought went into rendering it as fool-proof as reasonably possible, and that makes it a good prospect for newcomers to the shooting sports.

Extraction is also totally independent of the action opening; in line with the no-frills utility theme of the Model 42, the extractor is actually a two-piece assembly with one single stamped-sheet-steel part attached to the polymer sliding manual extractor body and bent to engage both the rimfire case rim above and the shotshell rim below when pulled to the rear by the thumb and forefinger. The “ejector” is your fingernail. This gun isn’t meant to be used on the battlefield; you can expect it to shoot decently—just make sure your aim’s good because you won’t get a quick follow-up shot with the same barrel. “Spray ’n pray” does not apply here.

Up on top, the little Savage is fitted with black polymer sights. The front blade is an integral part of the barrel band that supports the two barrels together at the muzzle end, and the rear is fully adjustable for both windage and elevation by a two-screw “move and try” process without visible graduation markings or clicks. This trial-and-error setup is less precise than more expensive rear sights, but the sighting system is functional, and once you get the rimfire point of aim mated with the point of impact, you’ll probably just leave it there anyway. The rear notch is small and tight, but it works with the front blade for a decent sight picture. An interesting mix of materials, the trigger, hammer, action lever and other internals are steel where it’s needed, and the rest of the lightweight combo gun is made of polymer.

The instruction manual that comes with the Model 42 indicates the factory sets its sights at 100 yards. Since I generally don’t take a .22 out that far with iron sights, I did my accuracy testing at 50 yards instead, with five loads off a sandbag rest under a generally sunny sky. The trigger was a trifle heavy at 5.5 pounds, with a fair amount of overtravel, but it was surprisingly crisp, with no take-up or creep whatsoever.

Shooting several five-shot groups with each load was a leisurely process, as I had to perform every function with this gun myself, but that’s the nature of a single-shot, and it doesn’t take long to develop a smooth routine of shoot, open, slide, extract, load, close and shoot again.

The Savage Model 42 is no target rifle, with single-projectile rimfire loads printing fully 8 inches high at 50 yards, and slugs impacting higher, with the rear sight at its lowest elevation setting. The plastic rear sight is easy to file down to lower impacts if you’re so equipped and inclined, or you may look to the aftermarket for a better sight system. Think Skinner- or Williams-type peep sights.

The sight system aside, the rifle did pull off a best-of-session 0.88-inch group with the Federal American Eagle hollow points that wasn’t shabby at all, and it had only one misfire, with a Remington Golden bulk round.

One advantage of the single-shot, break-action design of the combo gun is that, in this case, it allows more versatility in shell length. Where other action types may limit you to the shorter 2.5-inch .410 shells with a lighter payload or lower velocities, the Model 42 lets you take full advantage of the longer 3-inch loads available for hunting, and the .410 can certainly use all the help it can get in that area. Most “budget” .410s seem to be cylinder-bore (i.e. no choke), and so is the Savage; patterning at 7, 15, and 25 yards with two buckshot loads shooting perfectly to point of aim at 15 yards showed its viability for hunting or defense out to 20 and 25 yards, while the two birdshot loads indicated a max distance of 15 yards under ideal circumstances on the right birds. I also tested two types of .410 slugs at a distance of 50 yards, and the results were adequate.

The Model 42’s functioning, aside from the single .22 misfire, was good overall. The stamped-steel extractor worked every time on the rimfire empties but failed to engage several of the shotshell rims. This wasn’t a big deal, as I could remove everything fired with my fingernail and nothing was hard to get out of the chamber. Otherwise, nothing jammed, nothing bound up, nothing broke, and everything else operated as it should. The hinge is smooth, the serrated hammer spur is easy to control, loading is straightforward for beginners, and the gun’s not at all intimidating to shoot. The thick black rubber buttpad is more than you’d need with even 3-inch shells in the light-recoiling .410.

While the Model 42 takes a much less expensive construction route than earlier Savage combo guns did, it’s not a bad candidate for a trail gun, truck gun, survival gun, skunk and rat gun, or even a defensive gun loaded with the right buckshot shell in the hands of somebody who may not be able to work with something a little more powerful or a little more complicated. Savage lists the Model 42 at $480, and it’s also offered in a .22 WMR version. For more information, visit savagearms.com or call 413-642-4260. 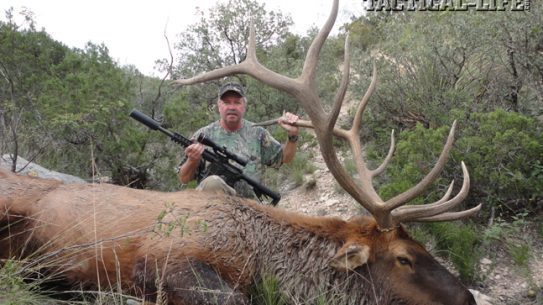 Join Bill and Joyce Wilson as they score Texas elk-Sako 85 and Wilson Combat...