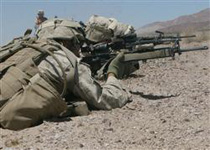 Bouncing and swaying in the back of an amphibious assault vehicle as it rolls through the desert, Marines wipe the sweat off their brows, waiting for the AAV to stop and the rear ramp to drop.

Once the ramp drops, the Marines from Company F, 2nd Battalion, 2nd Marine Regiment quickly exit the vehicle and begin assaulting an enemy bunker. While one group of Marines fires, another group maneuvers, allowing them to quickly overrun the ‘enemy’ position.

After ensuring the area is clear, the Marines reenter their AAV and the vehicle takes off in a could of dust toward its next objective on the outskirts of an abandoned town aboard Marine Corps Air Ground Combat Center, Twentynine Palms, Calif.

During the assault, the Marines utilized most assets available to an infantry company, including air support, indirect-fire support, engineers and snipers.

“It’s not often that you get to work with all the assets at one time,” said Nunning, an Evansville, Ind., native.

After pushing through the enemy positions, the Marines then occupied an abandoned village and held it by setting up entry and vehicle control points, machine gun positions and conducting night-time patrols and raids.

The next day, Marines used the ECPs and VCPs to allow role players, dressed up as playing the part of local citizens, to enter the Marine-held town. At the same time, the Marines kept an eye out for known insurgents trying to get back into the village. Put into practice in a real-world environment, CHB tactics will allow the Marines the opportunity to deny insurgents sanctuary and support from local populaces while at the same time providing security for innocent citizens.

After this training, the Marines of Company F said they are confident in their ability to execute what they learned during their upcoming deployment to Afghanistan.

“I think our deployment is going to go really well,” said Cpl. Jeffrey H. Gober, a squad leader with Company F. “Everyone is grasping the concepts. Training never stops and our motto is ‘never waste a minute,’ so we’ll just keep going forward with that.”

Following on the heels of Company F, Marines from Company E endured the same rigorous training the following week.

“It was very productive, it’s something we can put in our tool box for later on,” said Cpl. James C. Anderson Jr., a squad leader with Company E. “With all the scenarios that are going on in the mountains of southern Helmand, we’ll defiantly be able to use this training in country.”

After CHB-2, the battalion came together to practice a battalion-wide defense during CHB-3, the third phase of Mojave Viper.