Stack the odds in your favor with some large-caliber rifles. Sure, the 5.56mm NATO might be king for most operations, but having something with a bit more energy is like holding that lucky ace. 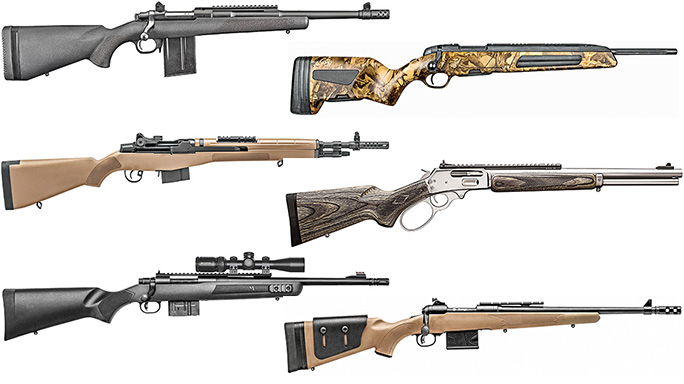 The .308 Winchester/7.62mm NATO is a popular action card in this game, but the deck includes other choices as well. The 300 Blackout and .458 SOCOM are another pair of winners. Here are some of the best bets when it comes to big-bore AR-platform rifles on the market today.

Adams Arms is a leader in the short-stroke-piston AR market, and the Tactical EVO in 300 Blackout is a perfect example of the company’s gear. From the forged upper and lower to the barrel’s Melonite finish, these guns are built for durability. Adams Arms equips the Tactical EVO with a Magpul stock and grip, a VDI Jet Comp muzzle device and a Samson free-floating handguard. (adamsarms.net)

For a lightweight .30-caliber rifle, it is tough to beat the MPW from Advanced Armament Corporation (AAC). The 300 Blackout MPW comes in several configurations, including SBRs with 9- and 12.5-inch barrels. Features include a Blackout flash suppressor, a free-floating handguard and a nickel-boron-coated bolt carrier group. (advanced-armament.com; 770-925-9988)

Built from the ground up for strength and reliability, the M5E1 from Aero Precision starts with custom forged 7075-T6 aluminum receivers that are highly regarded in the industry. Aero Precision uses high-end barrels made of 4150 chrome-moly steel that are QPQ black nitride treated for long life. The KeyMod handguard is exceptionally strong and rigid, yet lightweight and free-floating. The rifles have been designed to use many standard AR-15 parts. (aeroprecisionusa.com; 253-272-8188)

Armalite is a name often associated with the AR platform (AR is short for “Armalite Rifle,” after all), and the new AR-10 Tactical, with its 18-inch barrel, is more than worthy of bearing that name. This rifle sports a number of features including a two-stage, precision trigger, an ambidextrous safety lever, a Raptor ambidextrous charging handle and a 15-inch KeyMod handguard. Magpul supplies the stock, pistol grip and folding sights. (armalite.com; 800-336-0184)

Few companies make a standard rifle that has a more custom look than the Black Rain Ordnance PG13 chambered in 7.62mm NATO. Featuring a silver skull anodized finish and a spiral-fluted barrel, the PG13 really stands out when delivering the goods. This rifle is more than a pretty face. With a nickel-boron-coated bolt carrier group and a proven direct impingement system, the PG13 will run reliably in virtually any environment. (blackrainordnance.com; 888-836-2620)

The MOE 308 Enhanced Optics Ready Carbine (ORC) from Bushmaster combines an inexpensive price with the company’s reputation to deliver a gun that will appeal to many shooters. This rifle comes with a threaded, 16-inch, chrome-lined barrel and two-stage trigger. A Magpul stock and grip come standard, while the free-floating handguard is made by Troy Industries. (bushmaster.com; 800-883-6229)

Modularity is one of the key features to the Colt LE901-16SE. With a simple conversion kit, this .308/7.62mm rifle can utilize any Colt 5.56mm NATO upper in mere seconds. As it ships, the gun has ambidextrous controls, an adjustable stock and folding sights. The LE901-16SE has a 16.1-inch, heavy barrel and a handguard that can be customized with included rails. (colt.com; 800-962-2658)

The integral suppressor on the DDM4ISR 300 may make this gun the ideal tool for an entry team using the 300 Blackout cartridge. The suppressor protects the hearing of the team members while still keeping the overall length to that of a standard 16-inch-barreled AR-type rifle. Daniel Defense’s stock and pistol grip are proprietary designs aimed at comfort and reliability. (danieldefense.com; 866-554-4867)

Chambered for the increasingly popular 300 Blackout, the Diamondback DB15B300 rifle uses forged upper and lower receivers for long-term durability. The rifle has a 16-inch, 4140 steel barrel with a 1-in-9-inch twist rate and is topped with an A2-type flash suppressor. The handguard is a specially modified quad-rail developed by Diamondback, and it’s paired with an ATI Strikeforce adjustable stock for maximum shooter control. (diamondbackfirearms.com; 877-997-6774)

DPMS’ GII rifles are designed to be modern evolutions of the AR. The guns feature forged uppers and lower receivers, a new extractor, dual ejectors, a steel feed ramp and an enlarged ejection port to enhance reliability. The Recon model has a two-stage trigger, a free-floating handguard and a 16-inch barrel with an AAC Blackout flash suppressor. (dpmsinc.com; 800-578-3767)

With military and law enforcement units around the world using the multiple SCAR 17 variants, there is no doubt that this gun performs well under stress. The SCAR 17S uses a short-stroke piston system for clean, reliable running. The quick-change barrel system allows a shooter to go from a standard length to CQC with minimal shift in the point of impact. The controls are ambidextrous, and the stock folds for carrying in tight spaces. (fnhusa.com; 703-288-3500)

With roots in the world-class HK417 assault rifle, the MR762A1 is a semi-automatic rifle that retains all of the “to hell and back” reliability that Heckler & Koch is known for. This gun uses a gas piston operating system to keep the gun running in even the harshest conditions. The standard quad-rail handguard can be removed and replaced with simple tools, and the controls are ambidextrous. (hk-usa.com; 706-568-1906)

Designed as a world-class rifle for a designated marksman, the Lewis Machine & Tool (LMT) LM308SS Sharpshooter Rifle Weapon System is the American version of the acclaimed L129A1 system fielded by the United Kingdom. This rifle comes with everything a marksman will need including eight magazines, an Otis cleaning kit and a Pelican hard case. (lmtdefense.com; 309-787-7151)

Using a patent-pending design, the MVP Patrol in 7.62mm NATO is a Mossberg bolt-action rifle that is fed by M1A/SR-25 magazines. These very popular guns have a 16.25-inch, medium bull barrel that is threaded and capped with an A2-style flash suppressor. Rifle sights are standard on the gun, as is the Picatinny rail for adding precision glass. (mossberg.com; 203-230-5300)

Incredibly durable and reliable, the Patriot Ordnance P308 sets a high bar for .30-caliber rifles. The P308 rifle uses a dual extraction system that increases the reliability of the system and increases the extractor life by up to five times. Also enhancing reliability is the nickel-boron-coated bolt carrier group. These guns have ambidextrous controls, including the bolt catch, bolt release and safety. (pof-usa.com; 623-561-9572)

For special needs, the Rock River Arms LAR-458 X-1 rifle is chambered in .458 SOCOM. Although equipped with a muzzle brake, a suppressor can be added to take full advantage of subsonic ammo loaded with 500-grain bullets. A fluted, 18-inch barrel, forged upper and lower receivers, a free-floated handguard and a Hogue pistol grip come standard. Adjustable and fixed stocks are available on the X-1. (rockriverarms.com; 866-980-7625)

True to its reputation for ruggedness, Ruger’s SR-762 rifle is a solid performer. Using a chrome-plated gas piston system, the SR-762 runs clean and cool. The chrome-lined, 16.12-inch barrel is fluted, threaded and topped with a Mini-14-style flash suppressor. A Hogue Monogrip and adjustable buttstock are standard. (ruger.com)

Fitted with an 18-inch, stainless steel, match barrel and a 3.5-pound CMC trigger, shooters will be able to get accurate rounds on target with ease using the SP10 in 7.62mm NATO from Seekins Precision. The gun is fully ambidextrous and is fitted with popular furniture, including an Ergo pistol grip and Magpul STR stock. The bottom of the free-floating handguard is flat, allowing for better stability when shooting off of a bag or other rest. (seekinsprecision.com; 208-743-3400)

Smith & Wesson offers a feature-packed .308/7.62mm rifle at a very affordable price point. The M&P10 comes standard with an ambidextrous magazine release and bolt catch. Additionally, the safety selector is reversible. An adjustable buttstock is standard on the M&P10. The barrel is 18 inches long with 5R rifling, and it’s capped with the company’s enhanced flash suppressor. (smith-wesson.com ; 800-331-0852)

Distinctly different, the Troy Pump Action Rifle (PAR) is a manually operated, AR-style rifle that is legal in all 50 states. The PAR comes with the Lightweight BattleAx CQB stock that has a large storage compartment, and the Alpha Rail handguard integrates with the pump action to be both functional and stylish. Since the gun does not need the semi-automatic action parts, the PAR is lighter than you might expect for a .308/7.62mm, making it a good choice for a variety of duties. (troydefense.com; 413-788-4214)

Lightweight and accurate are two words that describe the .308 Winchester/7.62mm NATO BILLet-AR rifles from Wilson Combat. These rifles use match-grade, fluted barrels with pinned, three-prong flash suppressor. Wilson Combat uses the company’s own drop-in Tactical Trigger Unit to provide a clean pull and crisp break. The TRIM handguard is lightweight, free-floating and offers shooters the ability to easily add a light, laser or other accessories. (wilsoncombat.com; 800-955-4856)

A solid, well-balanced performer, the SRC-308 from Windham Weaponry checks a lot of boxes when shopping for a .30-caliber rifle. This rifle uses a traditional gas impingement system with a forged receiver and a bolt made of Carpenter 158 steel. The 16.5-inch barrel is chrome lined and fitted with an A2-stle flash suppressor. The six-position-adjustable stock and Hogue pistol grip ensure the gun will comfortably fit most any shooter. (windhamweaponry.com; 855-808-1888)

A full-featured AR-15 rifle, the Yankee Hill Machine YHM-8305-300 is chambered in 300 Blackout. The rifle uses the mid-length KR7 KeyMod handguard to allow for the attachment of accessories while keeping the weight down to 6.3 pounds unloaded. The KR7 is octagonal with seven of the eight sides allowing for the attachment of KeyMod accessories. The threaded, 16-inch barrel comes with the company’s very popular Phantom flash suppressor. (yhm.net; 877-892-6533)