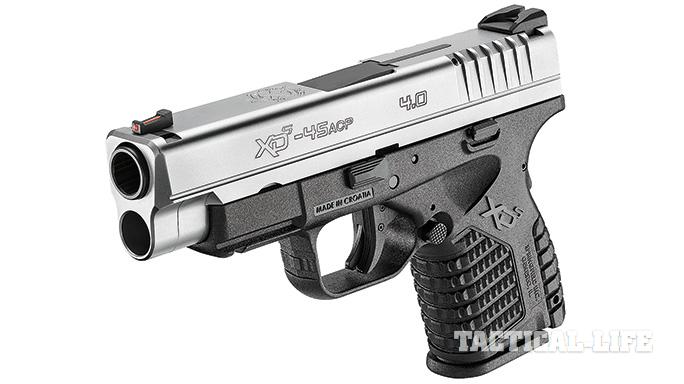 1 of 5
Backup Best Bets: 3 Deep-Cover Springfields
The sleek XD-S 4.0 in .45 ACP from Springfield Armory shoots like a full-sized pistol but carries like a compact despite its big-bore chambering. 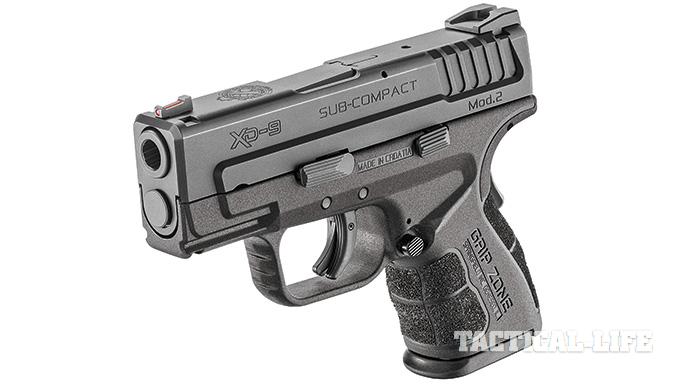 2 of 5
Backup Best Bets: 3 Deep-Cover Springfields
Based on the 3-inch-barreled XD Sub-Compact, the new Mod.2 gives you an outstanding combination of the proven 3-inch barrel length with features from the latest XD-S 9mm. 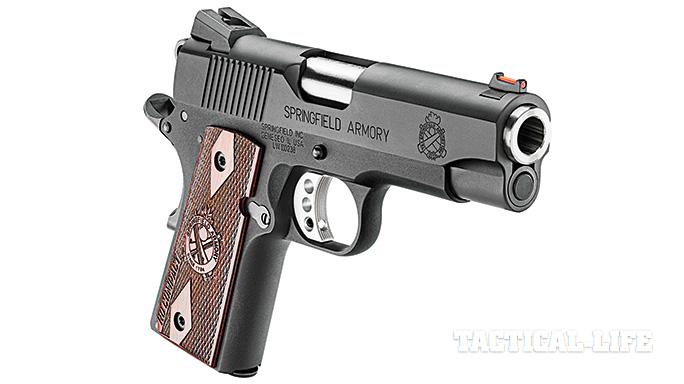 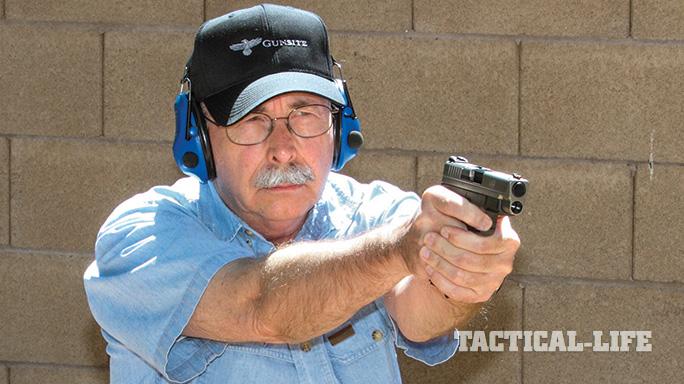 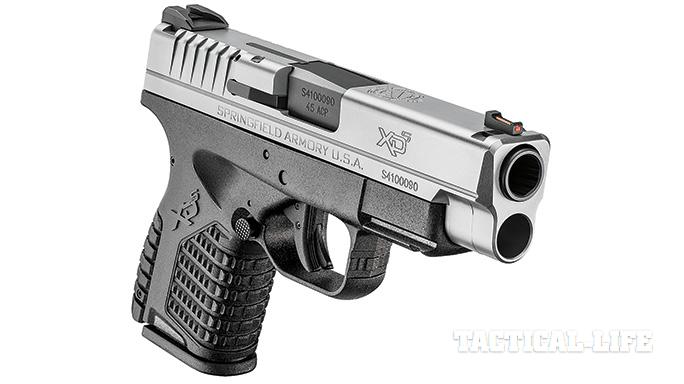 5 of 5
Backup Best Bets: 3 Deep-Cover Springfields
Like others in the XD-S series, the 4-inch-barreled .45 features a durable polymer frame with high-traction grip texturing and a Picatinny rail for adding lights and lasers. 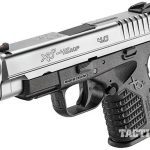 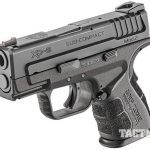 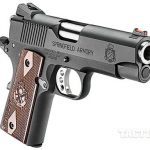 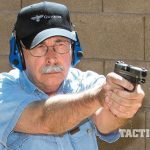 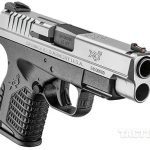 Since being introduced in the early 2000s, Springfield Armory’s XD line of pistols has become very popular. That’s because of the series’ reliability, ergonomics and the wide variety of variations and chamberings. After introducing the XD, the company followed with the XDM version that included modifications like a larger magazine capacity and interchangeable backstraps that enhanced the already excellent pistol. Springfield then debuted the XD-S version, which built on all the features that made the other XDs so popular but added a twist. Instead of a double-stack magazine, a single stack was used and the barrel was shortened to make the gun easier to carry discreetly.

To make the smaller XD-S appeal to an even larger segment of the market, Springfield recently increased the barrel length from 3.3 inches to 4 inches and named the new version the XD-S 4.0. Initially it was chambered in 9mm, but now it is also chambered in .45 ACP. And with a slightly longer barrel, compared to the original XD-S’ 3.3-inch barrel, the .45 ACP should perform a bit better because of increased velocity. Another advantage is a slightly longer sight radius, making it easier to shoot accurately. Finally, that additional length adds a bit of weight to the front end to help reduce muzzle rise. So, for the officer or civilian who needs a thin, easily concealable backup gun in .45 ACP, the XD-S 4.0 is a strong candidate.

The XD-S 4.0 is available as either a bi-tone model with a matte stainless steel slide and a black, polymer frame (like my test gun) or as an all-black version with a Melonite-finished slide. The rear of the slide is deeply serrated for a positive grip, and all the corners are nicely rounded to reduce the possibility of snagging on clothing or abrading skin. Up top, the rear sight is black steel with a wide square notch, two white dots for fast targeting, and a serrated rear surface to help reduce glare. The front sight comes with a red fiber-optic insert that gathers up every last possible amount of ambient light, making it appear to glow, even in sunlight. A green fiber-optic insert is supplied with easy-to-follow installation instructions. The front and rear sights are dovetailed into the slide so they can be drift-adjusted for windage.

The 4-inch barrel has a 1-in-16-inch twist rate and an extremely hard and durable Melonite finish. And a nice feature of the XD line is the loaded-chamber indicator, which is a metal rod that is flush with the top of the slide until a round is chambered. At that point, the rod is pushed up, providing a visual and tactile indicator that a round is in the chamber.

The gun comes with two magazines, a short one that holds five rounds and another with a grip extension that holds six. For concealment, the short magazine may be the answer, but for shooting comfort and control, the longer magazine, which adds about an inch to the length of the grip, is better. In fact, the longer magazine makes firing the gun almost like firing a full-sized pistol. Making the XD-S 4.0 even more user friendly are two interchangeable backstraps to accommodate shooters with smaller or larger hands.

The slide catch and takedown levers were easy to manipulate, while the magazine release is truly ambidextrous and allowed magazines to drop freely when pressed with the thumb or the trigger finger. The trigger is equipped with Springfield’s Ultra Safety Assurance (USA) trigger system that on the test gun broke at just over 7 pounds, which is within the 5.5- to 7.7-pound manufacturer’s specifications.

Another nice feature of the XD-S is the grip safety. While some may dismiss it as unnecessary, it is very valuable, especially when holstering the gun. If the thumb is moved to the rear of the slide, thus releasing the grip safety, an unintentional discharge is less likely if the trigger is accidentally caught by clothing or the edge of the holster when reholstering the pistol.

This gun is not a heavyweight, so shooting the .45 ACP cartridge is not going to be recoil free by any stretch of the imagination. While not punishing, it is more than one would encounter with the 9mm version of the gun. Nevertheless, the gun was comfortable to shoot and recoil was easily manageable—made more so no doubt by the added weight up front from the extra barrel length. Unlike most small guns, this one can be fired at the range during practice for longer periods because of the extended magazine and barrel length.

For those who believe that a 4-inch barrel is just the right length in a self-defense gun, Springfield Armory’s new XD-S 4.0 in .45 ACP is a great choice that builds upon the XD line’s reputation for quality.

Springfield Armory isn’t resting on its laurels of XD success. No, sir. This year Springfield invites shooters to get into the GripZone with the new XD Mod.2 subcompact series available in 9mm, .40 S&W and .45 ACP. These new handguns offer refined contours, a new grip-to-hand interface and the superb front and rear sights developed for the company’s latest .45 ACP and 9mm XD-S models.

Based on the 3-inch-barreled XD Sub-Compact, the new Mod.2 gives you an outstanding combination of the proven 3-inch barrel length with features from the latest XD-S 9mm. In outward appearance the Mod.2 sports a new contour to the polymer frame, changing how the frame integrates with a new slide design. It is a more refined pistol that is easier to handle, has slightly leaner dimensions and is faster to get on target.

At the heart of the Mod.2 is a new multi-surface grip texturing boldly molded into the grip strap. It is called the GripZone, and it is literally embossed into the side panels. The new design has varying surface textures, a concept based around the dynamics of the human hand. The three-quarter panel, where the palm swell and the first joints of the fingers wrap around the grip, is the most aggressively textured for a firm, tactile hold. The front and rear surfaces are the second most aggressively textured where the palm and the insides of the fingers grasp the pistol. Combined, the front, rear and three-quarter panels make the Mod.2 less prone to movement during recoil. Additionally, the Mod.2 triggerguard is rounded at the front like the new XD-S models, rather than squared off like earlier XD versions.

The new, more rounded and slightly narrower slide boasts several improvements, including new rear serrations, which Springfield calls the “Posi-Wedge Slide Serrations.” This deeply recessed design with five grooves helps reduce the chance for slippage when racking the slide. The single most import feature of the new slide design, however, comes from replacing the original white-dot sights with the latest XD-S’ red fiber-optic front sight and combat-style white-dot rear. This combo on the Mod.2 makes the pistol faster to get on target under varying lighting conditions and extends the sight radius by 0.5 inches.

Tipping the scale at 26 ounces unloaded, the 9mm XD Mod.2 measures 6.25 inches in length, 4.75 inches in height from the base of the magazine to the top of the low-profile combat rear sight, and 1.19 inches in width. In short, it is a pretty small gun for a 14-round 9mm. Springfield also offers an extended-capacity magazine for the Mod.2 that adds another three rounds for a 16+1 capacity and a longer grip (with the magazine’s X-Tension), which increases the height to 5.5 inches. There will also be Mod.2s chambered in .40 S&W and .45 ACP with 9+1 standard capacities and extended mags with 12+1 and 13+1 capacities, respectively.

With the XD’s grip angle, high beavertail and grip safety working in concert with Springfield’s Ultra Safety Assurance (USA) trigger safety, the Mod.2 takes nothing away from the previous XD Sub-Compact design but adds features that bring this established Springfield model up to par with the latest XD-S series. To see me wringing out the new 9mm Mod.2 on the range, visit personaldefenseworld.com.

Many who just love the 1911 can’t be talked into using any other handgun, but they will consider a smaller version of Browning’s classic design. Now Springfield Armory has taken its successful full-sized Range Officer and shrunk it down to make the Range Officer Compact. Built with precision shooting in mind, it has a forged frame and slide as well as a National Match stainless steel bull barrel—all precision fit.

Springfield then tosses in a low-profile combat rear sight and a fiber-optic front sight for increased visibility and enhanced sight acquisition. The gun also comes with an extended beavertail grip safety, a flat mainspring housing and a beveled magazine well. Although the full-sized Range Officer was designed for competition, this compact, 4-inch-barreled 1911, with its six-round magazine, could be a good choice for officers looking for a dependable backup option, especially because it’s chambered for the .45 ACP. 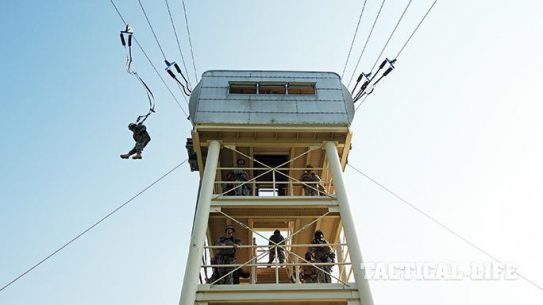 Learning to drop behind enemy lines with the US Army’s elite Airborne School!